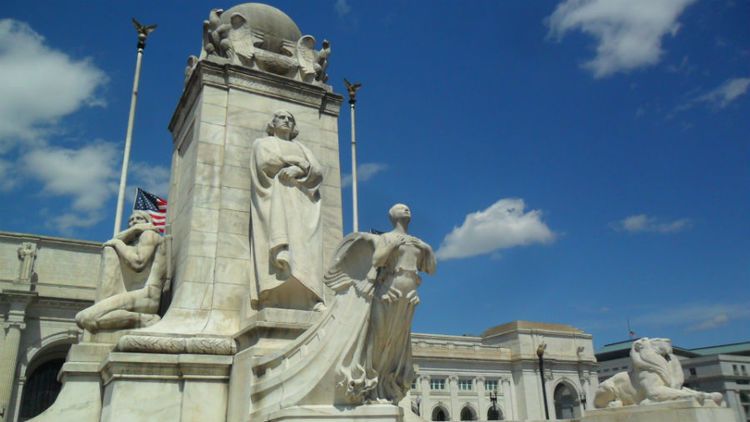 The Fulford File | Goodbye Columbus, And Goodbye America? Not So Fast! 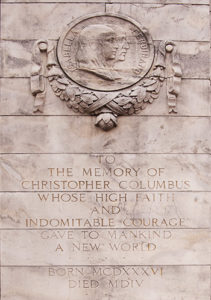 That's the inscription on the monument to Christopher Columbus in front of Union Station in DC. The monument, a really great sculpture group by Lorado Taft, was dedicated in 1912, by people who thought that discovering America,, in the face of great odds and great dangers, was a Good Thing.

People have been celebrating Columbus Day in America since 1792. It's certainly popular with Italian-Americans, who think of Columbus as not only the discoverer of the Americas, but as the first Italian in the New World.

Nowadays, the best you can say is Columbus Day parade proceeds peacefully, which is what the story from Denver reads today. Last year, 83 protesters were arrested, including Russell Means, who's a big anti-Columbus guy.

And nowadays, you get young white people in college saying how horrible Columbus was to the Indians. Here are a couple of typical examples, from Brown University in Providence, Rhode Island.

“About 30 students and faculty gathered on Lincoln Field yesterday bearing signs reading 'No Racist Holidays at Brown,' 'Remember History Responsibly' and 'Say No to Columbus Day at Brown' in a 'speak-out' against the University's recognition of Columbus Day this weekend, and to raise awareness in the community about the historical inaccuracies associated with the holiday.”

One of the students at Brown has an essay on Columbus, in which his courage at being willing to “Sail on!” is considered a moral failing, but his treatment of the Indians is the worst thing ever. It's sort of like those modern students, who, asked what they know about George Washington, say “He owned slaves“.

“Columbus' journals reveal a man racked by insecurity who was obsessed with reaching Asia and obtaining gold. He falsified longitudinal readings to calm his uneasy crew, fabricated sightings of tree branches and birds, and, after encountering native peoples, tricked them aboard his ship with trinkets and forced them to collect gold under punishment of death. In short, he was deceitful and opportunistic, thinking of little beyond his ultimate goals.

“While it's hopefully unlikely that someone exhibiting this behavior today would receive a marble statue in our nation's capitol, reducing Columbus to a caricature of an evil conqueror representative of all indignities against American Indians is just as unproductive as representing him as a hero.

“It's not unwise to view Columbus alongside other early explorers, but it becomes problematic when the details of each encounter are lost in the process of criticizing these now infamous figures.

“Indigenous people were mistreated in ways that extend beyond conventional stereotypes of land theft and smallpox blankets, and solely focusing on Columbus diminishes the true scope of these atrocities.

“Additionally, attempts to downplay the importance of European perspectives in this particular historical narrative ultimately do more harm than good. Telling history from the viewpoint of the oppressed is important, especially since a lack of source material and the government's neocolonial motivations have silenced these voices for centuries. But any historian worth his or her weight in primary sources knows that a well-researched analysis of any historical phenomenon requires accounts from all points of view.” Adrienne Langlois '10: Rewriting Columbus, Brown University Daily Herald

Actually, there's nothing wrong with representing Columbus as a hero. (And the indigenous people behaved pretty badly themselves.) In 1892, Chauncey M. Depew gave a different view in a speech called “The Columbian Oration,” which can be read here:

“All hail, Columbus, discoverer, dreamer, hero, and apostle. We here, of every race and country, recognize the horizon which bounded his vision and the infinite scope of his genius. The voice of gratitude and praise for all the blessings which have been showered upon mankind by his adventure is limited to no language, but is uttered in every tongue. Neither marble nor brass can fitly form his statue. Continents are his monument, and unnumbered millions, present and to come, who enjoy in their liberties and happiness the fruits of his faith, will reverently guard and preserve, from century to century, his name and fame.”

A piece not about Columbus Day, specifically, but the title alone makes the point.