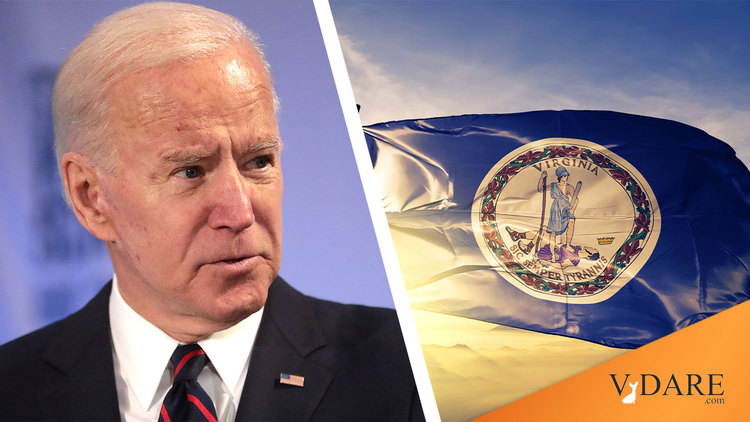 Earlier by Patrick J. Buchanan: Who Decides What Kids Should Be Taught?

"I don't think parents should be telling schools what they should teach."

With this remark—arrogant, dismissive, contemptuous—in his debate with Glenn Youngkin, Terry McAuliffe committed a historic gaffe.

From that debate forward, his poll numbers steadily sank until McAuliffe lost his lead, and with it, the election.

And going down to defeat, McAuliffe dragged with him his fellow Democratic candidates for lieutenant governor and attorney general and watched Virginia's House of Delegates revert to Republican rule.

What was McAuliffe saying, and what were Virginians hearing, in his remark? McAuliffe was saying that, in deciding what should be taught in its public schools, Virginia parents should just sit down and shut up.

Thus, a year after Joe Biden won Virginia by 10 points did McAuliffe lose the state by three, a 13-point turnaround. In New Jersey, which Biden had won by 16, the popular Democratic governor barely survived a cliffhanger.

These dramatic shifts in voter behavior testify to a serious misreading by Democrats of the presidential election returns of 2020.

Biden's total of 81 million votes, with a 7-million vote margin over former President Donald Trump, had been hailed as testament that his time had come and that the American people had both rejected Trumpism and embraced the liberal policies and politics of good old Uncle Joe.

But the 2020 election was in reality a referendum on a single simple question: Do you want four more years of Trump? Yes or no?

Some 74 million people came out and voted to keep Trump in the White House, the largest number of voters ever won by a president.

However, an even larger number of voters were saying, "Enough!"

As moderate Democrats, desperate to halt the progress of Sen. Bernie Sanders in the primaries, had voted for Biden to prevent a socialist from winning their nomination, voters who wanted an end to the Trump era cast their votes for the other name on the ballot, which was also Biden.

In 2020, Biden lit no fires in the primaries and spent most of the general election sheltering in the basement of his Wilmington, Delaware, home.

A vote for Biden was a mandate to replace Trump, not to overturn Trump's signature policies of no more wars, secure the border, cut taxes, rebuild the manufacturing base, reduce trade deficits, deregulate the economy and unleash the power of the U.S. free market system.

The Biden victory was a rejection of Trump, not a mandate for the agenda of Biden's party, which, with its left-wing core dominant, is outside the mainstream of America.

When the American people voted for Biden, they were voting for competence and an end to the daily conflict and chaos, not a Second Great Society.

They were not voting for $6 trillion or $3.5 trillion for cradle-to-grave socialism. They were not voting to "Defund the Police!" or tear down statues of Christopher Columbus and Confederate soldiers, or rename schools carrying the names of George Washington, Woodrow Wilson, Thomas Jefferson, Andrew Jackson and Robert E. Lee.

They were certainly not voting to abandon Trump's wall and throw open the nation's borders to anyone who can make it through Mexico to the Rio Grande—or to give $450,000 in reparations for migrant families who were separated from their children after breaching our border.

They were not voting to have their children taught in public schools that the country they love is shot through with "systemic racism," and most children in America are born into "white privilege" and belong to an oppressor class whose victims are children of color.

The message to the Democratic Party Virginia sent was this:

"You can indulge the crazies in your party, but if the American people come to believe you share their ideas and intend to implement them, we are going to relieve you of control of Congress in 2022 and of the White House in 2024. Rely upon it."

Biden, who is today 10 points down from where he began his presidency, is facing some seemingly insurmountable problems.

Two million people have illegally crossed the U.S. border into our country since he took office. The debacle of the early days of our withdrawal from Afghanistan are indelibly fixed in the public mind and identified with him.

Prices of food and gas and other necessities have risen even more rapidly than the 4–5% inflation that shows no sign of abating.

Supply chains for U.S. goods from abroad, from autos to appliances, are clogged, with container ships backed up in the Los Angeles and Long Beach harbors. And Biden is himself a portrait in confusion and contradiction.

Daily he loses his train of thought in public fora, forgetting places and names. While shutting down pipelines from Canada into our country to save the planet from the scourge of fossil fuels, Biden is calling on the Saudis to pump more oil to cut gasoline prices at the pump in the USA.

Having lost Virginia, Biden and his party look today like they are beginning to lose America.