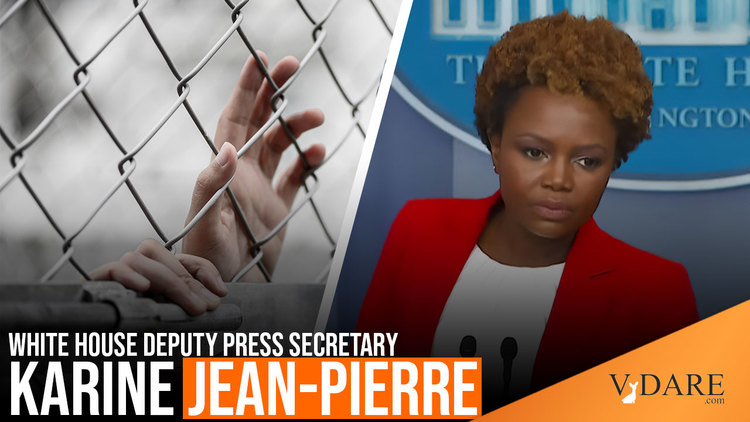 So the Biden Regime is negotiating damages to illegal aliens who were arrested and detained, then “suffered” family “separation," after crossing the border with minor children in 2018 and 2019. Taxpayers’ tab: reportedly $450,000 per person and up to $1 million per “family.” Total cost: $1 billion. (Biden recently tried to deny this [Biden labels report government to pay separated immigrants $450,000 ‘garbage,’ by Kyle Morris, Fox News, November 3, 2021] but black lesbian immigrant deputy White House spokeswoman Karine Jean-Pierre quickly set him straight.)

However, the biggest problem with this “settlement” is not the cost—it’s the fact that it’s a felonious scam, because illegals suffered no damages. They have no legal right not to be deported or separated at the border. And this scam is a legacy of the Clinton Administration’s disgraceful Flores Settlement signed with illegal aliens and their attorneys 25 years ago.

In 1985, Jenny Lisette Flores, an illegal Salvadoran minor, was arrested at the Mexican border, then detained pending deportation hearings. Her parents paid Mexican coyotes to smuggle her in. Sound familiar? Illegals used the same smuggling scheme during the Obama Regime and the Trump Administration to import their children. Flores entered as part of another crisis at the border, but that one was short-lived and solved by the judicious application of arrest, custody, and deportation.

Needless to say, Treason Lobby shysters went to court and convinced U.S. District Court Judge Robert Kelleher, a Nixon appointee, to stop the Immigration and Naturalization Service from strip-searching and detaining minors. A three-judge panel of the Ninth U.S. Circuit Court of Appeals overruled Kelleher, but then the whole court reversed itself in an en banc ruling. That sent the case to the U.S. Supreme Court [The History of the Flores Settlement, by Matthew Sussis, Center for Immigration Studies, February 11, 2019].

Originally known as Flores v. Meese, the case was decided in 1993, when Janet “Send In The Waco Killers” Reno was Attorney General. SCOTUS voted 7–2 for the government, and remanded the case back to the Ninth Circus for implementation [Reno v. Flores, SupremeJustia.com].

Where a juvenile has no available parent, close relative, or legal guardian, where the government does not intend to punish the child, and where the conditions of governmental custody are decent and humane, such custody surely does not violate the Constitution. It is rationally connected to a governmental interest in "preserving and promoting the welfare of the child.”

Three years later Congress passed and Clinton signed The Illegal Immigration Reform and Immigrant Responsibility Act of 1996 (Govinfo.gov, September 30, 1996]), which made all illegals subject to detention and removal. The attorney general had the option to parole them.

But neither SCOTUS nor the new federal law settled matters. As usual with Treason Lobby lawfare, they kept complaining. The U.S. was still mistreating illegal alien children, they argued. And they kept filing lawsuits. In 1997, INS chief Doris Meissner signed the Flores Settlement, which established that illegal-alien minors would be released “without unnecessary delay.” (In fact, CIS’s Sussis says in the article cited above, Meissner later confessed that she simply didn’t like kids in custody.)

Of course, during the “family” and “unaccompanied minor” onslaught at the border in 2018–2019, Flores came back to haunt the Trump Administration. Kritarch Dolly Gee ruled that “without unnecessary delay” meant no longer than 20 days. She used the Flores Settlement to bust open the borders.

Comes now the Biden Regime with its $1 billion Border Bonanza … and Flores as precedent.

The illegals, i.e., their Treason Lobby attorneys and the American Civil Liberties Union, claim that “families” separated at the border suffered damages and sued under the Federal Tort Claims Act, which permits payments for harm caused by Federal employees acting in their official capacity. FTCA grew out of a U.S. Supreme Court decision, Bivens v. Six Unknown Agents of the Federal Bureau of Narcotics. Prior to Bivens, the United States was immune from lawsuits except for violations of signed contracts.

Though Congress created tort liability in FCTA, the relief is financial and was not supposed to be used to change the law or public policy. (As an aside, that hero of the Constitution, Justice Clarence Thomas, is an avowed opponent of Bivens [Clarence Thomas Thinks You Shouldn’t Be Able to Sue the Feds for Civil Rights Violations, by Colin Kalmbacher, Law and Crimes, February 25, 2020]). Apart from FCTA, individuals can also seek redress and obtain injunctions against federal actions that violate their civil and constitutional rights. But damages are not awarded in such cases.

Just as Meissner and Bill Clinton ignored SCOTUS and federal law with Flores, so the Biden Regime defies FTCA and Bivens. The key principle of federal tort claims is that a plaintiff must show harm; i.e., a tort, an unlawful act by officers of the U.S. Being arrested and separated from one’s parents or children after breaking the law is not a tort. Example of a tort: an FBI sniper shoots your wife in the head while she is holding your baby. Your wife was unarmed and not threatening anyone [Idaho shootout survivors get $3 million settlement, by Carl Cannon,  Baltimore Sun, August 16, 1995].

A possible example applicable here: an illegal is arrested unlawfully. But this would be almost impossible to prove. In these cases, none of the arrests, deportations, or criminal prosecutions were unlawful. Federal law authorizes the arrest of illegal aliens [8 USC 1357, Powers Of Immigration Officers And Employees, Law.Cornell.edu].

Nor is there any right, once paroled, released, or deported, to be reunited with a spouse or children. The government might have an interest in deporting families together, but it is neither required by law nor any SCOTUS decision to do so. Perhaps DHS should have kept better track of illegal aliens and deported them together, but given the hundreds of thousands who zerg-rushed the border, that was impossible.

Similarly, illegal-alien arrestees and convicts have no right to be reunited with family members after release. Americans released from federal prison are not “reunited” with families at the expense of the federal government. They get a set of civilian clothes and a bus ticket back to the federal district where they were convicted.

But twisting the concept of a tort claim isn’t the settlement’s only problem. Indeed, it might be the lesser of two.

Recall, FCTA was not meant to be used to change public policy. But as with Flores, which did alter public policy despite federal law and court precedent, the “remedy” for the border “separations” will change public policy. Biden won’t just turn a gaggle of law-breaking foreigners into instant millionaires. He must include “a pathway to remain in the country,” as the ACLU’s torpedo said of the hoped-for settlement. In other words, illegals get instant legalization, too.

My take: this is yet another case of “sue and settle,” whereby the government invited the lawsuit to pursue politically untenable policy changes behind the scenes [Stopping Sue and Settle, by The Editorial Board, Wall Street Journal, October 18, 2017].

What was the invitation? If not a sub rosa phone call from someone at DHS to the ACLU, perhaps during the Trump Administration, then certainly when Biden said the “separations” were a “moral stain” on the nation. That provided not only the excuse for a big payout, thus ensuring ever-lasting loyalty at the ballot box, but also the “pathway” to make them voters. (Some lawsuits were settled, by the way, during POTUS 45’s term [U.S. in Talks to Pay Hundreds of Millions to Families Separated at Border, by Michelle Hackman, Aruna Viswanatha and Sadie Gurman, Wall Street Journal, October 28, 2018]).

Biden, Attorney General Merrick Garland, any federal attorney or other government employee, as well as the illegal aliens and their communist ACLU attorneys, should be charged with at least three crimes, not including aiding and abetting illegal aliens [8 U.S. Code § 1324—Bringing in and harboring certain aliens, Law.Cornell.edu]. If the illegals suffered no damages, then those scam artists are defrauding the American taxpayer:

Of course, no one will be brought to book for these crimes; nor will any of Biden’s Open Borders subversives appoint a special counsel.

That leaves impeachment, which should be high on the agenda of 118th Congress if and when the GOP sweeps the House and Senate in 2022.