Biden Rush: Arrests By Border Patrol "Soared To The Highest Levels Ever Recorded"

Usually the border crossing numbers from last month are released near the beginning, or in the middle, of the month, often on a Friday,  the traditional day for burying bad news. This time, they were released on October 22, the fourth Friday of a five-Friday month.

The Washington Post constructed this chart before the release of the official numbers, using "unpublished U.S. Customs and Border Protection data" obtained by them.

U.S. authorities detained more than 1.7 million migrants along the Mexico border during the 2021 fiscal year that ended in September, and arrests by the Border Patrol soared to the highest levels ever recorded...

Illegal crossings began rising [Late, I.E. after the election] last year but skyrocketed in the months after President Biden took office. As CBP arrests increased this past spring, Biden described the rise as consistent with historical seasonal norms. But the busiest months came during the sweltering heat of July and August, when more than 200,000 migrants were taken into custody. 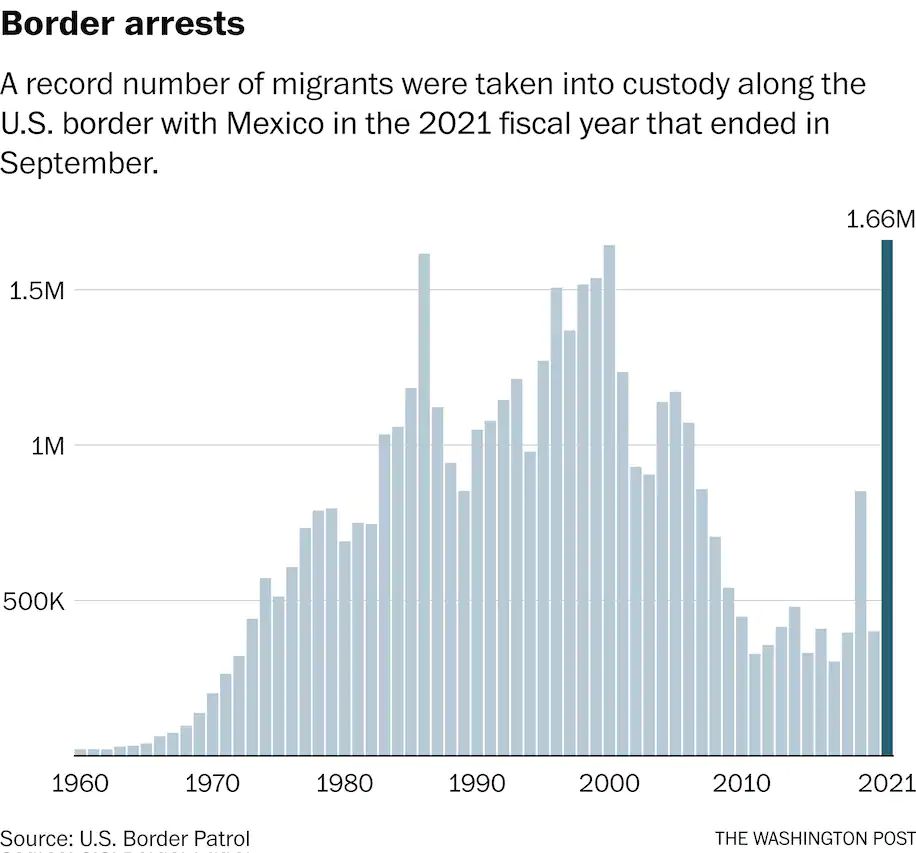 They had to issue the following notable correction:

A previous version of this article incorrectly said that Border Patrol arrests along the Mexico border reached their highest levels since 1986. Historical data shows fiscal year 2021’s figure was the highest total ever recorded. The article has been corrected.

Here is our own interactive chart:

There's actually a slight downturn in the last calendar month, the delay in posting was all about the Fiscal Year. If there's a downturn this month, it may just mean caravans piling up like container ships off the coast of the U.S.

The caravans are coming and they are literally carrying banners with Joe Biden's name on them.