National Data | “Deal With DACA With Heart”? What About American Millennials?

President Trump’s squishy statement in his otherwise-rambunctious Thursday press conference that “we’re going to deal with DACA [Obama’s notorious Deferred Action for Childhood Arrivals temporary Executive Amnesty] with heart” has some immigration patriots worried, although all previous suggestions of Trump softening have proved wrong and there are reports he may be plotting a way round the issue [The White House has found ways to end protection for “Dreamers” while shielding Trump from blowback, by Brian Bennet and Michael A. Memoli, Los Angeles Times, February 16, 2017]. And there’s agitation that a DACA beneficiary has been detained in a recent ICE sweep, perhaps because he’s a gang member. Undiscussed in all this: the plight of American Millennials and how this increase in labor force competition from illegal alien DREAmers, regularly if incredibly portrayed as high-school valedictorians, could impact them.

Job prospects for new college graduates have been bleak for quite some time. The Left-leaning Economic Policy Institute reports that the average college graduate in 2016, between the ages of 21 and 24, makes just under $18.53 per hour, or $38,500 per year for a full-time worker. That is practically unchanged from what the typical graduate made in 2000 ($38,200 in 2016 dollars.)

They are the lucky ones. Nearly 6% of young college grads in 2016 were unemployed, and 12.6% were underemployed (either working part-time involuntarily, or not currently looking for work.) They have become common stereotypes, the college grad working as a Starbucks barista, for example.

The “college premium”—the relative income advantage of young college grads to young high school grads—grew rapidly in the 1980s and 1990s. But it slowed significantly after 2000. And any increase in the college advantage since 2000 is due mainly to wage losses for high school graduates rather than strong wage growth for college graduates.

These statistics reflect the average situation for all recent college graduates—native-born, naturalized citizens, legal non-citizens, and after 2012, DREAMers. Millennials, whether born here or abroad, whether here legally or illegally, simply have not benefited from college as much as similar groups of baby-boomers, Gen-Xers, and other older generations.

Among possible reasons: the loss of good paying manufacturing jobs to computerization, the lingering impact of the Great Recession on employer hiring decisions—and immigration. Already back in 2003, Harvard economist George Borjas found immigration was having a significant impact on college graduates’ incomes, particularly for younger graduates.

The DACA applicants represents a small but significant increase, on the margin, to competition in the millennial labor market. About 820,000 illegals age 15 to 24 had applied for DACA as of August 2016, equal to some 8.3% of the 12 million native-born college students of that age.  The total potentially eligible for DACA has been estimated as high as 1.9 million. [DACA at Four: Participation in the Deferred Action Program and Impacts on Recipients, By Faye Hipsman, Bárbara Gómez-Aguiñaga, and Randy Capps, Migration Policy Institute, August 2016].

This could hardly come at a worse time for American millennials. In the 2015-2016 school year, the cost of attending a four-year public college—including in-state tuition, books, room and board, and transportation expenses—averaged $24,061. (For private schools it was $47,831.)  Public college costs have risen 69% in real terms since 2000, outstripping the 42% rise at private institutions. For much of this period median family income declined, as the Great Depression decimated incomes and employment.

Not surprisingly, student loans are now far more common and burdensome. A Pew Research paper finds that 37% of the households headed by an adult younger than 40 owed money on student loans in 2010, a proportion that has more than doubled since 1989. The average student debt outstanding for households with student loans in 2010 was $26,682, nearly triple the amount of corresponding households in 1989 adjusted for inflation  [Young Adults, Student Debt  and Economic  Well-Being, Pew Social Trends, May 14, 2014]

Researchers at the New York Federal Reserve Bank report that 17% of student loans are in default, while a whopping 63% have missed making one or more payments on schedule.  Default can be ruinous to credit scores and set young graduates back years when it comes to buying a house or a car. High debt can force new graduates to make career choices that are not right for them, stifling their lifetime earnings relative to their debtless peers.

This might be part of the explanation for what we regard as a remarkable statistic: young college educated adults without student debt obligations have about seven-times the net worth of young college educated adults with student debt.  [The Class of 2016 | The labor market is still far from ideal for young graduates By Teresa Kroeger, Tanyell Cooke, and Elise Gould, Economic,  April 21, 2016].

All of which goes to show what a bullet young Americans (and their taxpaying parents) dodged when the various versions of the DREAM Act failed in congress—provoking Obama to attempt to impose DACA by Executive Action.

These bills would have required states to charge in-state tuition for young illegal alien students. In effect, each would have received a tuition subsidy averaging some $6,000 per year.[Estimating the Impact of the DREAM Act, By Steven A. Camarota, CIS.org, November 2010] 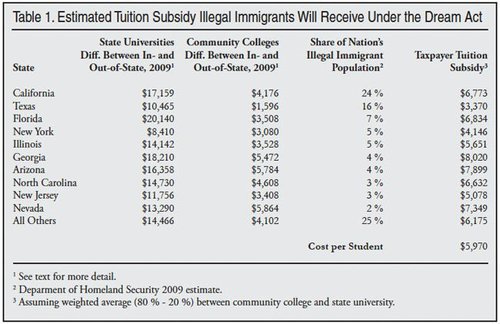 Taxpayers would thus have been compelled to cough up an added $7.8 billion per year for the DACA tuition subsidy—money that might have helped defray college costs for children of U.S. citizens,, foreign-born and native-born American alike. America First? What about dealing with Millennials “with heart” too?