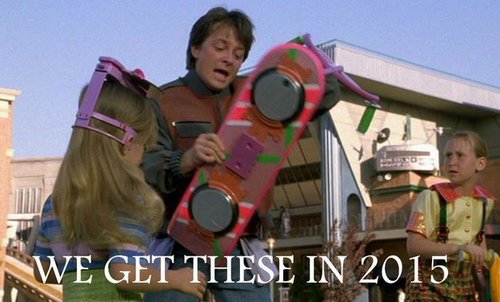 October 21, 2015 Is Back to the Future Day! And, Thanks To Immigration, It’s Not What America Expected. Or Deserved. 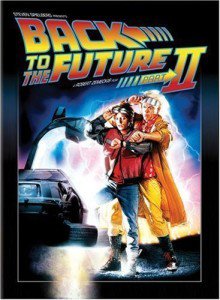 In 1989’s Back to the Future II, Doc Emmett “Doc” Brown and Marty McFly travel to October 21, 2015 to change the future for Marty’s children. Before the events of the first film, Doc Brown told Marty he invented the time machine because “I've always dreamed of seeing the future, looking beyond my years, seeing the progress of mankind.” Well, to use a phrase Leftists always deploy to “argue” for their position, “It’s the year 2015” now. October 21, 2015 in fact. So how about that “the progress of mankind”?

It’s not happening—largely thanks to America’s continuing post-1965 immigration disaster.

Back to the Future II showed the citizens of Hill Valley, California enjoying:

We don’t have flying cars. We don’t have hoverboards. We don’t have food rehydrators. In fairness, we do have video calling, but most of what we saw in Back to the Future II was simply a product of the visual effects artists at Industrial Light & Magic. Fiction, not reality.

But we do live in a vastly different society than Americans of the 1980s. Today, if “Hill Valley” was a real town in California, it would likely be another predominantly Hispanic disaster in what is already a Third World state. Rather than providing a setting for Americana, too many cities in California are simply extended slums, plagued by drought, poverty, cultural alienation, and political radicalism.

And it’s not just California. How would Doc Brown react to the recent statements by a Governor of a Middle American state like Minnesota that critics of the state’s colonization by foreigners were “unacceptable, un-Minnesotan, illegal and immoral”?

Harsh words and heartfelt sentiment were exchanged by community members and local officials on racial issues in Central Minnesota at the St. Cloud NAACP Community Conversation with Gov. Mark Dayton.

“If you are that intolerant, if you are that much of a racist or a bigot, then find another state. Find a state where the minority population is 1 percent or whatever. It’s not that in Minnesota.

(Curiously, this is almost word-for-word what a German official just told his unfortunate constituents. Is somebody writing a script?)

What was this dystopian hellhole of Minnesota like the same year Back to the Future was released?

In the 1970s, Time magazine ran a cover story about Minnesota, with the caption: “The Good Life in Minnesota.” [August 13, 1973]It noted the population of those making possible the good life in the state was then 98 percent white:

If the American good life has anywhere survived in some intelligent equilibrium, it may be in Minnesota. It is a state where a residual American secret still seems to operate. Some of the nation's more agreeable qualities are evident there: courtesy and fairness, honesty, a capacity for innovation, hard work, intellectual adventure and responsibility.

Politics is almost unnaturally clean — no patronage, virtually no corruption. The citizens are well educated: the high school dropout rate, 7.6 percent, is the nation's lowest. Minnesotans are remarkably civil: their crime rate is the third lowest in the nation (after Iowa and Maine). By a combination of political and cultural tradition, geography and sheer luck, Minnesota nurtures an extraordinarily successful society.

Minnesota has its drawbacks. ... Unemployment outside the Twin Cities area is troublesome, and personal income taxes are the highest in the nation. ... Some argue that Minnesota works a bit too well and too blandly, that its comparatively open and serene population is a decade or two behind the rest of the U.S.

Minnesota's people are overwhelmingly white (98 percent), most of them solidly rooted in the middle class. Blacks rioted in Minneapolis in 1966 and 1967, but with only 1 percent of the state's population, they have not yet forced Minnesotans into any serious racial confrontation. Or at least, not apocalyptic confrontation. ... Two black state legislators were elected last fall from predominantly white middle-class suburban districts.

[Looking back at 'The Good Life in Minnesota', by Greta Cunningham, Minnesota Public Radio, August 12, 2003]

Virtually all population growth in the state is non-white, with refugee resettlement of incompatible racial groups (as VDARE.com has repeatedly documented) driving the change.

Events once unthinkable in the bad old days of all-white Minnesota are now regular occurrences as refugees imported to the state gleefully join Islamic terrorist groups. Minnesota pols’ solution: bribe immigrants not to kill people by offering social programs! Heck, those “Libyans” who gunned down Doc Brown in the first Back to the Future film would fit right in in modern Minneapolis.

“The Good Life in Minnesota” has been replaced with a much different life:

Over the past 25 years, Minnesota has seen a substantial shift in its racial and ethnic makeup. The number of Minnesotans born outside the country has tripled, with immigrant and refugee communities now making up a critical component of the state’s economy — and a growing political force.

Today, about 84,000 Minnesotans are originally from Central America, while nearly 40,000 claim Somali ancestry, making Minnesota home to the largest population of immigrants from the Eastern African country in North America. Others have come from India, Vietnam, China and Korea, among other places.

[Who are Minnesota’s new Americans? Here's what the data tell us, by Andy Mannix, MinnPost.com, October 7, 2015]

Well, Doc Brown, you said you wanted to see “the progress of mankind.”

This is “progress” in Minnesota and California: chronic poverty and dysfunction in what was once “the Golden State.” Minnesota suddenly becoming a hotbed of jihad. The governor of this American state telling the people he’s supposed to represent that if they don’t like being replaced, they can leave.