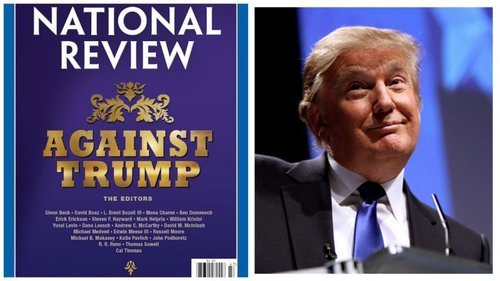 Contrary to the Main Stream Media perception, National Review has not just “purged” Donald Trump from the Conservative Movement. The Oxford English Dictionary defines a “purge” as “an abrupt or violent removal of a group of people from an organization or place.” This implies the purger has the power to remove the unwanted actor and that the purged was part of the entity to begin with. National Review does not have that power—least of all over Trump.

As VDARE.com has repeatedly pointed out and others are beginning to realize, while Donald Trump describes himself as a conservative, he never pretended to be part of the "Conservative movement". Most infuriating to the National Review and Conservatism Inc., he has not changed his positions or rhetoric to fit within their pet causes nor has he begged for the money and endorsements from the typical magazines, personalities, and donors.

Nor does National Review hold the power to define who is and isn’t a conservative. In fact, it hasn’t for some time. When William F. Buckley wrote In Search of Anti-Semitism in 1991, Murray Rothbard responded:

Buckley's latest encyclical may play well in the New York Times, but it's not going to go down very well in the conservative movement. The world is different now; it is no longer 1958. National Review is no longer the monopoly power center on the right.

[A Strategy for the Right, Mises Institute, January 1992]

Today, with the internet and the collapse in the number of people who want anything to do with the “conservative movement” in the first place, National Review’s power to purge is virtually non-existent. As The New Republic’s Jeet Heer wrote in a stream of tweets:

To the extent that NR did once have power to purge, that was in a very different media environment that exists now. NR's power in 1960s was that it was one of the few national outlets for conservative movement. That's not true anymore. The right-wing media landscape is much larger and much more fragmented, and some large outlets/voices are Trumpists. In the world of Breitbart & alt right twitter, NR is like the Pope issuing an encyclical to a throng of ultra-protestant sects.”

(This was far better than his column on the subject, National Review Fails to Kill Its Monster, by Jeet Heer, The New Republic, January 22, 2016).

Not only is National Review not purging Trump from what little is left of the conservative movement, virtually no commentator expects NR’s temper tantrum to have any negative effect on his campaign. Even the magazine itself seems to acknowledge this. Writing in National Review, Mark Krikorian sighed, “The fuss made over the ‘Against Trump’ issue may well help him, at least at the margins.” [Against Trump, for now, January 22, 2016].

National Review editor Rich Lowry responded: “It's possible. But we aren't a super PAC or a political campaign. Our role is to call it as we see it, and let the chips fall where they may” [Inside the ‘Against Trump’ Issue, Politico, January 24, 2016]

National Review publisher Jack Fowler made a similar point, acknowledging that Trump may well win but “we’re about the truth, and the truth wins in the long term." He thundered: "We’re about 2016, but we’re also about 1776. We’re not abandoning principle” [National Review Stands Athwart Donald Trump, Even If It Can't Stop Him, by Michael Calderone, Huffington Post, January 22, 2015].

Jonah Goldberg even acknowledged that the National Review’s anti-Trump stand is at odds with the voters.

“I’m open to the complaint that our self-interest has driven us to become too invested in an ideology that too few voters subscribe to. But if that’s the case, the remedy isn’t to abandon all principle and just join the mob. I’d rather go down with my ship, thank you very much.

Goldberg’s self-congratulatory conclusion: “My job—our job—is to write and say the truth as I see it.”

But while National Review portrays itself as bravely taking unpopular positions out of its devotion to timeless principles, the plain fact is that it has repeatedly abandoned “timeless” principles when they became unpopular with the elites.

Nowhere is this more true than on the issues of race and immigration. And when confronted on these shifts in principle, National Review often resorts to arguments about practicality rather than principles.

One need not believe that one’s own ethnic group, or any ethnic group, is superior to others…in order to wish one’s country to continue to be made up of the same ethnic strains in the same proportions as before. And, conversely, the wish not to see one’s country overrun by groups one regards as alien need not be based on feelings of superiority or “racism”…the wish to preserve one’s identity and the identity of one’s nation requires no justification…any more than the wish to have one’s own children, and to continue one’s family through them need be justified or rationalized by a belief that they are superior to the children of others.”

Jared Taylor asked William F. Buckley his thoughts on the column, and after many evasions, Buckley tersely responded that “It seems to me that the idea traditionally defended of endeavoring to maintain existing ethnic balances simply doesn't work any more.”

In 2007, Ramesh Ponnuru argued that immigration patriots should not oppose birthright citizenship because this “crusade is about as politically counterproductive as they come. It will pit restrictionists against children. And even in the unlikely event it succeeded, it would be (wrongly, in my view) struck down by the courts.” [Getting Immigration Right: A headache and a half for the GOP, October 8, 2007 (not available online)]

This is not the first time Ponnuru argued that immigration patriots should weaken their positions out of expedience.

In 2001, Ponnuru frankly acknowledged the magazine was shifting course from hardcore immigration patriotism to a “restrictionism that can succeed.” [Minding the 'Golden Door', April 23, 2001]

Ponnuru chided immigration patriots for supporting an immigration moratorium because it “made it seem as though they opposed all immigration.” He also dismissed efforts aimed at denying welfare to illegals because “nothing could have been calculated to alienate Hispanics more than the perceived suggestion that they were welfare chiselers.” Most of all, he rejected Peter Brimelow’s argument that immigration policy should not alter “the country's racial composition.” Ponnuru objected that Brimelow “opened the debate on terms that almost guaranteed the restrictionists' failure” because it gave the Left “ammunition” to call them racists.

In both these cases, Buckley and Ponnuru largely avoided challenging immigration patriots’ positions on the grounds of “truth” or “principles.” Indeed, in some cases (like birthright citizenship), they explicitly acknowledged the immigration patriots were correct. Instead, they rejected these positions because the arguments wouldn’t be well received. Ponnuru accused immigration patriots of indulging in “the fantasy that they could make immigration the central, realigning issue of American politics.” (In 2016, he seems to have forgotten this: see Why Immigration Is a Big Deal to Conservatives, Bloomberg, January 20, 2016)

Well, Donald Trump has indeed made “immigration the central, realigning issue of American politics.” He accomplished this feat by using tactics and rhetoric that National Review claimed would lead to failure. And now, suddenly, National Review wants to go down with the ship in order to stop him.

Yet while National Review is hysterical over Trump, the editors are not quite suicidal. After all, when Buckley said arguments against “maintain existing ethnic balances simply doesn't work anymore,” he didn’t identify exactly whom it “doesn’t work” with.

The answer is obvious: American elites. Buckley’s famous quote that “I should sooner live in a society governed by the first two thousand names in the Boston telephone directory than in a society governed by the two thousand faculty members of Harvard University” notwithstanding, particularly in his later years he was much more concerned with elite opinion than popular opinion.

And that explains the magazine’s actions. National Review acknowledges its attack on Trump is unpopular with the grassroots Right—but the move ingratiates the editors with the elites, especially the Main Stream Media elite. After all, that’s who their careers as Professional Token Conservatives depend on.

And never trying to move the Left’s Overton Window is the only principle that National Review really stands for.