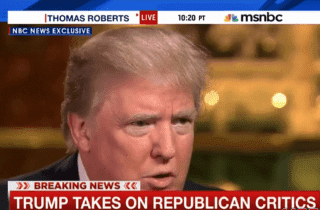 NR's Jonah Goldberg points and splutters at The Donald in a hit piece, never explaining why Trump is wrong in his remarks about Mexicans.

Why is Trump wrong, in other words? He is a "bad deal for the GOP."

Hilariously, Goldberg says Trump shouldn't have listened to those who urged him to run for president.

Nor did it dawn on him that some people say “you should run for president” the way you tell your long-winded uncle “you should write a book.” History is full of failed men who mistook flattery for insight.[ Trump Is a Bad Deal for the GOP, by Jonah Goldberg, July 8, 2015]

Yes, Goldberg, history is full of such men. Someone told Goldberg he should write a book (or two), and he mistook such flattery as the suggestion that he had something original or intelligent to say. Trump has actually responded—see Trump Steamrolls NBC Reporter, Takes Shots at Krauthammer and Jonah Goldberg,by Andrew Kirell, Mediaite,  July 8th, 2015.