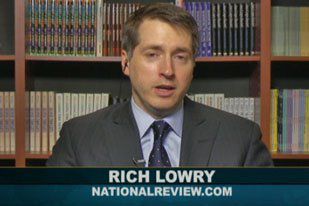 I was surprised by the ludicrously excessive vehemence of Rich Lowry's attack on Donald Trump's debate performance (A Fabulously Awful Night for Donald Trump, National Review, August 15 2015) until I realized this was obviously the pre-determined line handed out by Cuckservative Central (GOP insiders: Donald Trump is biggest loser, by Katie Glueck, Politico, August 7 2015) and had probably been written in advance. Not for the first time, comments from NR's long-suffering readers are savage.

Particularly odd was Lowry's claim that Trump "of course, couldn’t answer about his evidence that the Mexican government is pushing people over the border."  That the Mexican government is encouraging illegal emigration is so obvious that Trump may have though it needed no elaboration, but for the record VDARE.com reported that it had published a comic-book format "Guide for the Mexican Migrant" for illegals ("Avoid attracting attention, at least while you are arranging your stay or documents to live in the United States") over ten years ago.