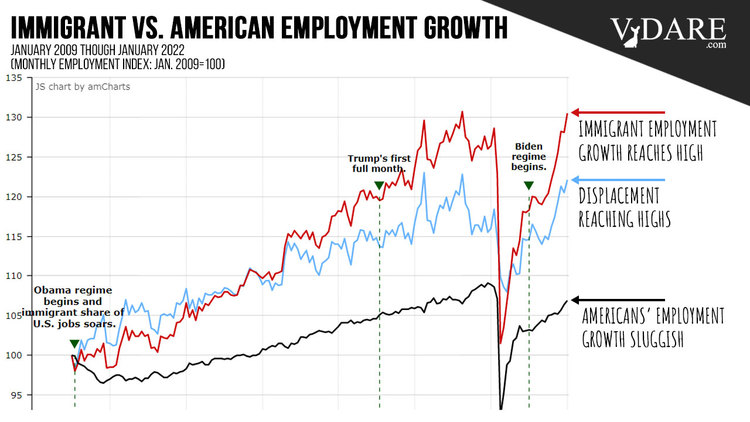 Of course the White House crowed about January’s stronger-than-expected jobs report [Biden takes victory lap with January jobs report, by Nick Niedzwiadek, Politico, February 4, 2022]. But what’s surprising—well, maybe not surprising given Conservatism Inc.'s general brain-deadness—is that the GOP had no clear response [Biden-era job growth is so good, the GOP is literally speechless, by Steve Benen, MSNBC, February 7, 2022]. What both missed: much or all of that job growth, depending which measure you use, was taken by immigrants. And the growth in the immigrant labor force was even greater still. Oh, and wage growth—nominal wage growth minus inflation—was actually negative.

The 467,000 gain in non-farm payrolls in January is even stronger than it looks, as it came despite the spike in absenteeism driven by the Omicron virus wave and was accompanied by significant upward revisions to the gains over the preceding couple of months," Andrew Hunter, senior U.S. economist for Capital Economics, said on Friday in a note on Friday.

For years, VDARE.com noted problems with the Payroll Survey. It consistently reports a total employment figure that is millions below that reported in the Household Survey, and now, in the latest report. Our theory: U.S. businesses are reluctant to acknowledge illegals on their payrolls. But this has never been explored by MSM commentators.

So VDARE.com readers should not be surprised that our analysis of the January Household Survey indicates an employment gain of 1.199 million, a figure more than twice the growth reported in the Payroll Survey.

Significantly, the Household Survey reports employment by nativity. And it shows that immigrants got nearly half of that job growth:

As calculated exclusively by VDARE.com:

Thus the New VDARE American Worker Displacement Index (NVDAWDI), our name for the ratio of the immigrant to native-born employment growth indexes since January 2009, rose to 122.1 from 120.5—a 1.36% rise.

Since we started calculating VDAWDI in January 2009 there has been only one month—April 2018—when our displacement index was higher than it is now.

April 2018 was an anomaly—an anomaly likely soon to be exceeded by real events in Biden’s second year. Despite 1.277 million immigrants reported as unemployed in January, the increase in the foreign-born working-age population continues to run at 1.5 million above the rate of the previous year:

Note carefully what this chart shows. Unlike our other charts, which show absolute values, this one compares each month to the same month of the prior year. So the immigrant workforce population grew by 1.538 million in January 2022 compared to January 2021. The corresponding increases for November and December were 1.318 million and 1.225 million, respectively.

In contrast, for most of the last Trump year of 2020, the immigrant workforce population declined year-over-year. This far exceeded the net exodus during the 2008 Great Recession, and the brief net exodus during Trump’s first year, when his mere presence seemed to have jawboned illegals into fleeing.

Another displacement metric—the immigrant share of total employment—also rose to levels not seen since April 2018. Our analysis shows that 17.979% of jobs were held by immigrants in January. Back in April 2018, immigrants held 18.083% of all jobs.

Bottom line: even in this confused labor market, the Biden Rush is finally showing up in the employment data. Native-born Americans are being seriously displaced and immigrants, legal and illegal, are seizing most or all the fruits of the expansion. The Political Class, Democrat and Republican, doesn’t want to know.