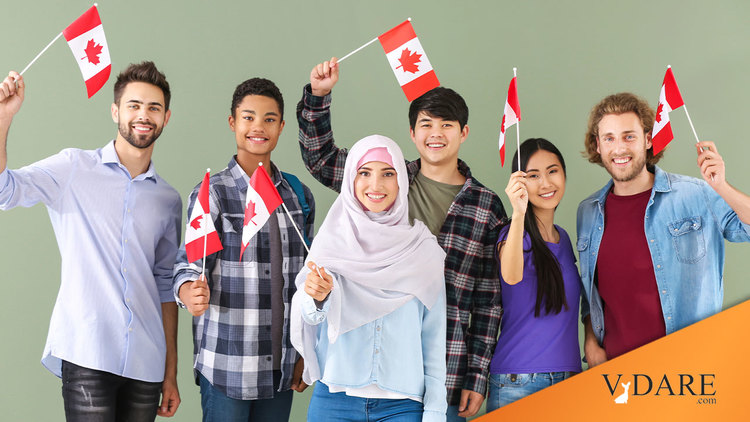 Gunnar Alfredsson
A+
|
a-

As Canada’s federal capital of Ottawa dug out from a winter storm Friday morning, the city was essentially under martial law. An unprecedented police action in the bright but frigid (35 degrees Fahrenheit) morning began with multiple arrests and the reinforcement of over one hundred police checkpoints. It was a tumultuous week: Justin Trudeau’s Liberal minority government invoked the Emergencies Act, a law that confers sweeping powers on the federal government, and a crucial parliamentary debate was conveniently cancelled citing security concerns [Speaker cancels Emergencies Act debate on Friday due to 'police operation,' by Christopher Nardi, National Post, February 18, 2022]. And overshadowed by other events, the Trudeau Regime also announced its new projected immigration intake for the year—another key component of its coup against the Historic Canadian Nation.

The federal government of Canada announced it would increase its newcomer admissions rate to just over one percent of Canada’s population [Canada sets ambitious immigration targets for post-pandemic recovery, by Laura Osman, Globe and Mail, February 14, 2022]. Federal Immigration Minister Sean Fraser said that Canada will admit 431,645 permanent residents in 2022, 447,055 in 2023, and 451,000 in 2024. This is equivalent to the U.S. admitting almost four million legal immigrants annually, over three times the current influx.

These new numbers surpass that record. The purported justifications for this reckless program are typical: the Canadian population is aging, and the economy will benefit from a huge influx of newcomers in the post-pandemic recovery to fill open job positions. And yet according to an Angus Reid poll conducted last June, 39% of Canadians think that immigration levels are too high [As Ottawa prepares to ramp up immigration post pandemic, Canadians are divided over target levels, Angus Reid Institute, June 28, 2021].

The plain fact is that the Trudeau Regime is Electing A New People. People of European heritage, who make up the core populace in Canada (as the U.S.), are seen as a nuisance, a problem to be solved. Whites, and their multiethnic allies who actually enjoy life in the West, are seen as an impediment to establishing deracinated, authoritarian economic zones populated by a compliant underclass.

Canada’s intensified immigration intake is intrinsically linked to the Freedom Convoy and Trudeau’s attempts to impose Leftist authoritarian rule. In the Canadian Left’s warped ideology, the admirable solidarity on display by working-class truckers and their families is indicative of “white supremacy.”

For weeks, truckers took care of their pets and their children amidst a convivial atmosphere complete with saunas and bouncy castles while displaying the psychological traits unique to Western peoples: “a predisposition for fairness, honesty, and cooperation, patience and self control, time drift and hard work, free will and the capacity to make one’s own decisions, common sense and nonconformist thinking over media-corporate controlled thinking" [“White Supremacist Misogynistic” Truckers = Peaceful Family Oriented Protests, by  Ricardo Duchesne, Council of European Canadians, February 19, 2022].

Several live streams documenting the Freedom Convoy’s presence in downtown Ottawa depicted peaceful assemblies, flag waving, and interviews. Other scenes that have been depicted throughout the Truckers’ stay in Ottawa have been overwhelmingly jovial: there was dancing, live music, DJs, and revelry. But these are traits that anathema to BLM-Antifa shock troops who abhor the family, revel in drug taking, and engage in nihilistic arson and property destruction.

The racial targeting of white truckers was shockingly apparent—Trudeau officially exempted refugees, asylum seekers, immigrants, and other ethnic minorities from being arrested. His Emergency Measures Regulations: SOR/2022-21 order bans people from taking part “in a public assembly that may reasonably be expected to lead to a breach of the peace” but, incredibly, does not apply to

…any person in a class of persons whose presence in Canada, as determined by the Minister of Citizenship and Immigration or the Minister of Public Safety and Emergency Preparedness, is in the national interest.

It appears as though the Canadian government views native Canadians as second-class citizens who should have fewer rights than foreigners. How can such brazen discrimination based on skin color and nationality be in any way legal? [Trudeau’s Prohibition on Protests Exempts Refugees, Immigrants and Ethnic Minorities, February 20, 2022]

Events seemed to progress with dizzying speed throughout Friday and Saturday. Incidents captured on social media platforms illustrated the brutal crackdown. Ottawa police warned media that they would potentially be arrested.

All media who are attending the area, please keep a distance and stay out of police operations for your safety. Anyone found within areas undergoing enforcement may be subject to arrest. There will be a media availability later today at 474 Elgin Street. #ottnews

About an hour ago the Youtuber ZOT was arrested by Ottawa police in the middle of a livestream. As he was being given a "last warning" by an officer, two others moved in and placed him under arrest before the stream cut out. #FreedomConvoy2022 pic.twitter.com/exS8hlNQhN

Another independent streamer, using the pseudonym Ferryman’s Toll, is shown in this video as he was taken away by police.

The Ferryman’s Toll who joined us live from Ottawa last night during Flashback Friday was just arrested by regime enforcers.

Reporter Joe Warmington tweeted a video, which has since gone viral, of a woman being trampled by police horses later on Friday evening right in front of the Chateau Laurier, Ottawa’s iconic gothic hotel.

This is disturbing. Is the woman with the walker trampled by Mounted Unit horses alive? Is she in surgery? Has ⁦@SIUOntario⁩ been notified? Do you have any concerns or comment ⁦@OttawaPolice⁩ ⁦@JustinTrudeau⁩ ⁦@fordnation⁩ ⁦@JimWatsonOttawa⁩ - Why? pic.twitter.com/X251vZiIaq

In his subsequent article, Warmington wrote that the trampling incident and two other incidents were grotesque, including a protester behind police lines being repeatedly stuck with an officer’s rifle; and one driver “had his truck windows smashed by Ottawa Police (with) guns drawn and (he was) dragged out of his vehicle by force” [ WARMINGTON: Police horses trample demonstrators at Freedom Convoy protest in Ottawa, Toronto Sun, February 18, 2022].

Another video, Tweeted by iPolitics reporter Rachel Emmanuel, captured horse-mounted police pushing their way through the crowd while being flanked by officers on foot.

RCMP on horses just pushed back the crowd. The scene in front of the senate building is absolute chaos right now. pic.twitter.com/4ewGRx0njg

Independent journalist Andrew Lawton witnessed the same cavalry charge right before he was pepper sprayed.  Others were arrested at gunpoint. In yet another video, posted to a Telegram channel, a protester was dragged and then kneed multiple times by a masked police officer.

Canada’s truckers instinctively knew that something had gone wrong with their country’s political elite, and they decided to do something about it. Their revolt was completely unanticipated. And no one can anticipate what the consequences will be.

Gunnar Alfredsson [Email him] is a writer and researcher based in Ottawa, Ontario.