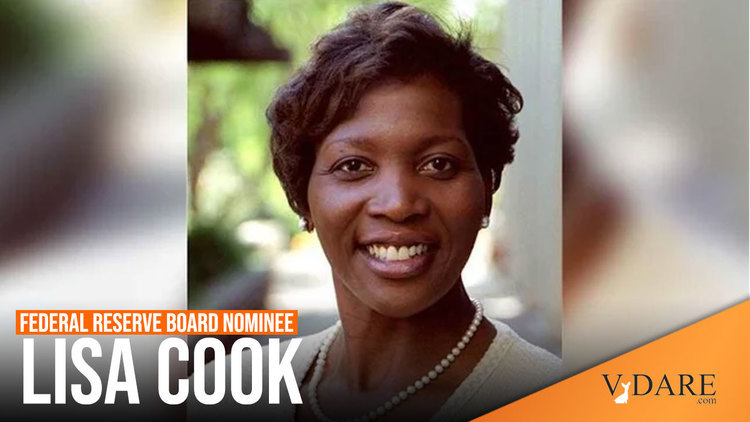 Besides being a black woman at a time when the Biden administration is publicly committed to appointing a disproportionate number of them, economist Lisa D. Cook’s prime qualification for her nomination to the Board of Governors of the Federal Reserve is a celebrated paper on black inventors. Her work raises one of the more troubling issues in political philosophy.

While most economists are agreed that the capitalist system generates more wealth than any other, what if capitalism can never generate what is now called “equity”: equal outcomes by race and sex?

What if—no matter how thoroughly any and all discrimination, abuse, and unfairness is rooted out of the capitalist system—blacks and women will on average be less likely to strike it rich or even just to perform up to par in demanding jobs than whites and men?

… on university campuses in the current year, these are not questions with which all professors of economics are happy to publicly wrestle. A safer approach is to blame any shortcomings in the performance of the good people like Lisa Cook on the bad people: i.e., white men. Not surprisingly, many of her readers, such as Cook’s interviewer on NPR, see this graph as proving blacks achieved equality with whites in inventiveness by 1899 (before the apparent nosedive in 1900 from which Cook attempts to draw large lessons). But Cook graphed white patents per million whites on the left axis (from 150 to 550) and black patents per million blacks on the right axis (from 0.0 to 1.0), a big no-no in academic data graphics precisely because it often misleads readers.

But…besides overstating black inventiveness by using a shifty graph design, she also understated the number of patents earned per million blacks by about 85% here due to an arithmetic error she made.

So, here’s my version of her graph, correcting both of her mistakes: Read the whole column there.