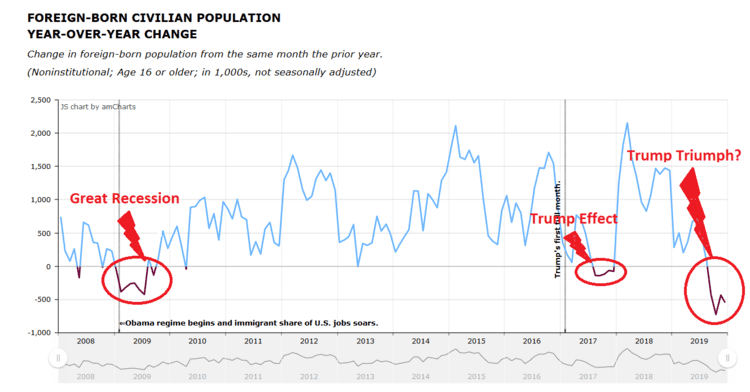 December  the fourth straight month of absolute decline in the foreign-born working-age population (16 years+).  It dropped by 547,000, or 1.27%, compared the same month last year. In percentage terms, this exceeds year-over-year drops for November and October, which saw declines of 1.00% and 0.99%, respectively, although it lags October’s 1.68% shrinkage. The decline follows a protracted slowing in the immigrant workforce growth rate that can be traced back to early 2018.

This current year-over-year immigrant workforce decline actually exceeds that seen in the 2008 Great Recession. The immigrant workforce population last shrank for successive months in last half of 2017, when the late lamented “Trump Effect” was literally scaring immigrants away. And back in 2008-9, the outflux was driven by economic malaise. But now the economy is strong.

Remarkably, this reduction seems to have been administrative measures: Trump’s Muslim ban (upheld by the Supreme Court) his revised public charge rules, even more thorough adjudication by USCIS. Note also that Trump has sharply reduced the “refugee” intake, from Obama’s peak of 85,000 to a proposed 18,000 for fiscal 2020.

“Among immigration lawyers, the cumulative effect of these procedural changes is known as the invisible wall,” Rachel Morris lamented in the Huffington Post  [Trump Got His Wall, After All, November 24, 2019].

Meanwhile, the BLS reported 160,000 new payroll jobs were created in December—slightly below the Wall Street consensus (165,000).

But the Household Survey of Employment, on which our monthly displacement analysis rests, shows a strong 210,000 employment gain for the month, with native-born Americans gaining positions while immigrants were losing them.

Trump has not yet reversed the Obama damage, but he does seem to have gotten the displacement deterioration in his own first years under control. From January 2017 through December 2019, he has presided over a labor market in which immigrants gained 1.288 million jobs, a 4.96% increase, while native-born Americans gained 5.434 million, a rise of 4.31%. In percentage terms, the immigrant/native-born gap in job creation under Trump—less than 1.0 percentage points in favor of immigrants—is comparatively low. As recently as April it was 7.1 percentage points, with immigrant employment rising 8.9% from the start of his administration, while native-born American employment gained 1.8%.

After peaking at 17.8% in February, the immigrant share of total employment drifted downward. May through July were particularly good – native-born Americans gained jobs each month, while immigrants lost them.

But the long-term Obama-era trend is still unbroken.

Since peaking in May (when more than 144,200 migrants were apprehended ,the highest monthly total in more than 13 years) apprehensions have declined by 72%.

Most of the decline occurred at legal border crossings where, at one time, 90% of asylum seekers “passed” their initial screening interviews, were given a court date, and waived in. Most melted into the interior without appearing in court, creating an immigration court backlog of almost one million cases.

Today the pass rate is less than 50%, as Border Patrol officers are now conducting interviews once done by human rights lawyers and refugee workers. According to the Huffington Post’s Morris, above, the U.S. Citizenship and Immigration  Service is “…also hiring 500 new asylum officers, targeting people with law enforcement or military backgrounds, who, according to USCIS spokesperson Matthew Bourke, are ‘uniquely equipped to support the agency’s improved vetting procedures and fraud-detection efforts.’”

The data also show that 4.64 million native-born and 863,000 immigrants were unemployed in December, but over the last year unemployment numbers have declined for both groups. Immigrants actually enjoyed a slightly larger percentage decline (10.66%), than native-born (8.37%.)

Bottom line: This is a formidably strong economy for both immigrants and native-born. Because there are fewer of the former, and more of the latter, the aggregate numbers favor the native-born. The past few months have particularly good for native-born Americans.

But more than three years after Trump’s great victory, GOP Senators are still on the donor-driven immigration bandwagon. Continued immigration-driven demographic drift will be suicidal for the GOP.  Yet that exactly what Senators like Utah’s Mike Lee are fighting for as the New Year begins.

Perhaps the most discouraging news in the December report: the anemic wage growth, amounting to just 2.9% over the past 12 months—far below the 3.4% peak reached in February, and down from the 3.3% year-over-year average in December 2018.

“It’s easier to get a job than a raise in this economy,” Grant Thornton chief economist Diane Swonk  told Patricia Cohen of the New York Times [After a Decade of Hiring, Plenty of Jobs but Raises Are Tiny, January 10, 2020]

We say: Employers, after decades of relying on a steady stream of cheap immigrant labor, are reluctant to acknowledge that the good old days are over.

If they are. In a disastrous January 10 interview with Laura Ingraham, President Trump seemed unfamiliar (not for the first time) with the fact that skilled immigration will depress American graduates’ incomes [In Immigration Debate, Trump Says We Don’t Have Enough American Workers to Fill Skilled Labor Jobs, by Neil Munro, Breitbart, January 12, 2020].

Fine summary by @USTechWorkers of @realDonaldTrump repeating @WSJopinion lies about immigration. V. common among plutocrats, WSJ Edit Page does a lot of damage. Trump needs to get out to more rallies!https://t.co/ECpSn36MGx