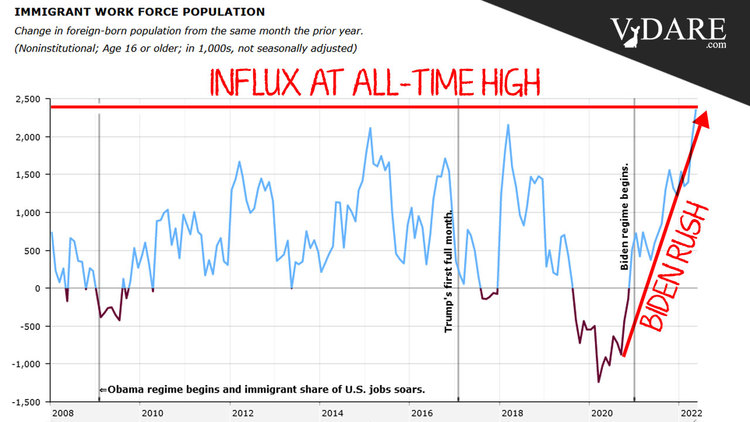 As usual, the Regime Media put a positive spin on the May Jobs Report released last Friday [WATCH: Biden hails ‘historically robust’ May jobs report as hiring remains strong, PBS, June 3, 2022] although the 390,000 net jobs growth reported by the widely cited survey of Employers was actually the first sub-400,000 month in a year. Also as usual, there was absolutely no Ruling Class mention of the immigration dimension: immigrants (legal and illegal, government data does not distinguish) apparently took almost half—some 46%—of these new jobs. For some reason, this interest is unique to VDARE.com. And above all, there was no mention of the astonishing Full-Merkel surge in the Immigrant Work Force Population. (See above.)

Thus, for example, the labor union–oriented Economic Policy Institute has all kinds of information and wonderful charts about the May Jobs Report, including the interesting news—curiously unmentioned by Biden—that black unemployment (6.2%) and Hispanic unemployment (4.3%) is higher than white unemployment (3.2%).

But, not for the first time, EPI completely ignores the immigration dimension. This is because, like the labor movement in general, it is now controlled by Woke college-indoctrinated bureaucrats, rather than Gompers-type sons of toil. [Tweet EPI and ask why.]

The collapse of the southern border is now showing up in the data:

This surge in the immigrant workforce is truly extraordinary: an increase of 2.36 million over the past 12 months. This is the largest gain, year-over-year, in the past 15 years. The corresponding increases for February, March and April were 1.345 million, 1.397 million, and 1.970 million, respectively.

(This increase is despite the fact that 958,000 immigrants reported as unemployed in May—a sign that the labor market is truly messed up.)

In contrast, for most of 2020, the population of working-age immigrants declined year-over-year. This decline far exceeded the net exodus during the 2008 Great Recession, and the brief net exodus during Trump’s first year, when his mere presence seemed to have jawboned illegals into fleeing.

The immigrant population of working age started growing again in absolute terms only in December 2020—when the election results spurred a renewed invasion: La Invitación—the Biden Rush [They Heard It through the Grapevine: Illegals Are Coming from All Over, by Mark Krikorian, CIS.org, May 19, 2021].

Not surprisingly—although the feed-through can take time—the immigrant share of U.S. employment has now also reached an all-time high:

Pro-immigration economists make all kinds of sophistical arguments about this phenomenon—such as that, although the Editor of VDARE.com (me) is an immigrant, I’ve still created a business that supports numerous starving American-born freelancers (PLEASE HELP SUPPORT THEM HERE!) so it’s a net benefit.

But the gross numbers here are simply too large.

The “other” employment survey, of Households rather than Employers, showed job gains moderating even more in May (to 321,000). But, because, unlike the Employer Survey, it reports nativity status, it picked up a troubling rise in native-born American displacement.

So the New VDARE American Worker Displacement Index (NVDAWDI), our name for the ratio of the immigrant to native-born employment growth indexes since January 2009, rose to a record 123.0 in May from 122.9 in April, a gain of 0.1%.

The overall unemployment rate remained at 3.6%—slightly above its pre-COVID 3.5%. Labor force participation ticked slightly higher, to 62.3% from April’s 62.2%, suggesting that a slightly larger share of the population was working or looking for work.

In May 158.4 million people held jobs in the U.S. Each 1% rise in immigrant employment share represents a transfer of about 1.58 million jobs from native-born Americans to immigrants.

We are told incessantly that the labor market is strong, that the demand for labor is far greater than the supply. But if true, employers should be raising wages to lure workers back to work. That’s not happening: Workers are still losing ground to inflation, with average hourly earnings up 5.2% year-over-year in May, while the CPI rose 8.1% in April, the latest data point. The consensus is that May will be worse [Biden, economy imperiled by predicted May inflation spike,  by Sylvan Lane, The Hill, June 9, 2022].

The big picture: The U.S. economy still has roughly 1 million fewer payroll jobs than before the mass layoffs that began in February 2020. And immigrants are gaining many of the new jobs.

Maybe that’s why real wage growth is negative. And why the Regime Media doesn’t want to talk about it.