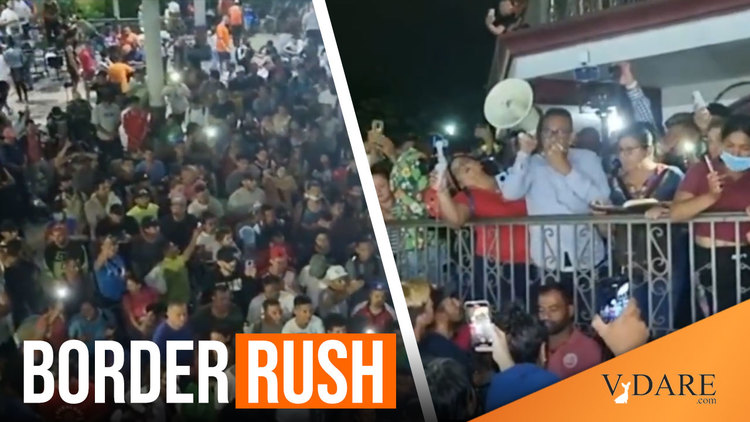 The Border Patrol had better brace itself. A caravan of at least 11,000 and as many 15,000 “migrants” is leaving Tapachula, Mexico for the U.S. border.

A freelancer  put the number at 7,000. But The Guardian claims the number will be twice that [Up to 15,000 may join largest ever migrant caravan to walk through Mexico to US, by Lillian Perlmutter, June 3, 2022].

Of course, the Guardian opens its account with the touching tale of a “migrant” woman whose chihuahua will offer emotional support during the trek.

Citing caravan organizer Luís Villagrán, director of the Center for Human Dignification, whatever that is, The Guardian assures readers that 70 percent of the caravan’s members are “women and children, aged between infants to people in their 70s.”

Video and photographs show mostly men, but in any event the “migrants” are mostly from Cuba, Venezuela, and Nicaragua, although Haitians, Central Americans, and “even citizens of India, Bangladesh, and several African countries” plan to jump the border. They know Traitor Joe Biden will release them.

More from The Guardian:

Villagrán and the migrants are demanding humanitarian visas … so the group can pass through migration checkpoints without being arrested or attacked by [the] Mexican National Guard, as happened in April. …

[M]migrants have poured into Tapachula’s parks and shelters. ... Migrant shelters that once housed no more than 400 people are now accommodating nearly 2,000. Bathrooms overflow, food dwindles until it is just one scoop of beans, and migrants sleep in the hallways, or on spread out sweatshirts in the jungle.

The caravan will move north by the coast. A hurricane might be the only thing that stops this tsunami of penniless illiterates from hitting the southwest border. Let’s Go Brandon certainly won’t.