A new automation report has been published and it tackles the measurement of a vital trend, namely the amount of robotization that has already occurred.

As has been noted here, in 2013 the Associated Press published a series documenting how the Great Recession had prompted many businesses to invest in technology, thereby killing middle-class jobs and slowing the recovery.

NEW YORK (AP) — Five years after the start of the Great Recession, the toll is terrifyingly clear: Millions of middle-class jobs have been lost in developed countries the world over.

And the situation is even worse than it appears.

Most of the jobs will never return, and millions more are likely to vanish as well, say experts who study the labor market. What’s more, these jobs aren’t just being lost to China and other developing countries, and they aren’t just factory work. Increasingly, jobs are disappearing in the service sector, home to two-thirds of all workers.

They’re being obliterated by technology. . .

The new report, titled Robots and Jobs: Evidence from US Labor Markets is a thorough and wonky 91 pages, aimed at a technology and university audience. Fortunately there are tech explainers around to translate the analysis-speak into regular English. Plus, the charts included in the Qz.com piece below are enlightening, particularly the first one which shows that robots have been increasingly used in American factories and elsewhere for decades.

Interestingly, the article begins with the automation warning from the outgoing President Obama, who nevertheless was the Immigrationist-in-Chief whose liberal policies admitted huge numbers of superfluous foreigners to compete with Americans, for example three million immigrant workers in 2013 alone. But in his final weeks he noticed the automation job threat. Oh.

With millions of humans being replaced by smart machines, importing immigrant workers is surely a foolish and obsolete policy that should be consigned to the ash heap of history.

In his final speech as US president, Barack Obama warned of the “relentless pace of automation that makes a lot of good, middle-class jobs obsolete.” Bill Gates, co-founder of Microsoft, has said that governments will need to tax robots to replace forgone revenue when human workers lose their jobs.

If the past is prologue, these concerns are warranted.

In a recent study (pdf), economists Daren Acemoglu of MIT and Pascual Restrepo of Boston University try to quantify how worried we should be about robots. They examine the impact of industrial automation on the US labor market from 1990 to 2007. They conclude that each additional robot reduced employment in a given commuting area by 3-6 workers, and lowered overall wages by 0.25-0.5%.

A central question about robots is whether they replace human workers or augment them by boosting productivity. Acemoglu and Restrepo’s research is a powerful piece of evidence on the side of replacement. So, brace yourself: According to the International Federation of Robotics, there are already between 1.5-1.75 million industrial robots in operation, and some observers expect that number to more than double by 2025. 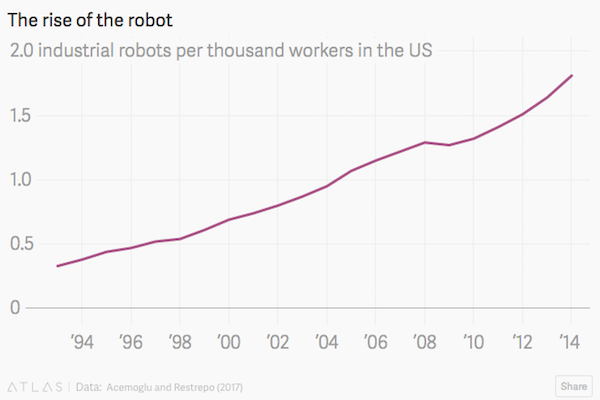 But not all robots are created equal. For their study, the economists use the definition of the International Organization for Standardization, which defines industrial robots as machines that are automatically controlled, reprogrammable, and multipurpose. By this definition, an elevator is not a robot, because it cannot be made to do anything besides shuttle people from floor to fl

Industrial robots are most commonly used in the automotive industry, which accounts for 39% of robot usage in the US. It’s no surprise, then, that workers in America’s Midwestern carmaking capitals have been the most affected by automation. 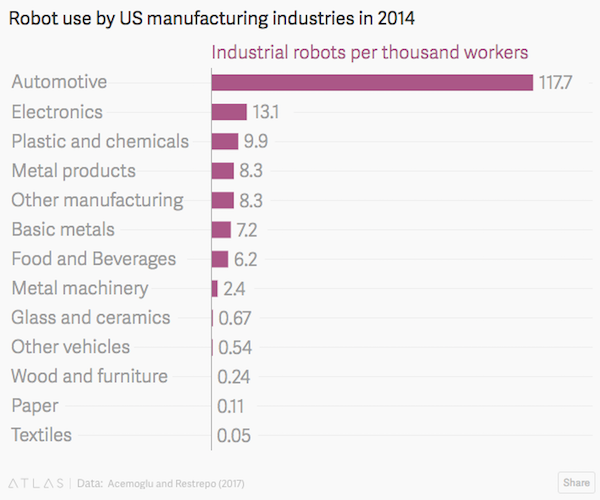 Assessing the impact of robots on jobs is no simple task. Advances in other kinds of technology, the spread of the internet, and increased trade with China and Mexico also led to changes in the US labor market over the period studied by the economists.

In order to isolate the effect of robots, Acemoglu and Restrepo used a clever statistical trick. They collected data on adoption rates of industrial robots in Europe, and then analyzed what happened to American labor markets by comparing industry trends with their equivalents in Europe. This isolated the changes likely caused by the spread of robots, and not some other factor peculiar to the US.

However you measure it, the short-term impact of automation has been wrenching for many workers. Yet, history also suggests that fears of new technologies leading to persistently high unemployment are unfounded. Over the long term, markets always find a way to make use of humans’ skills. Assuming this time really isn’t different, they probably will again.