The exchange occurred when the two candidates were arguing about Amnesty:

But I would note not only that — Marco has a long record when it comes to Amnesty. In the state of Florida, as speaker of the house, he supported in-state tuition for illegal immigrants. In addition to that, Marco went on Univision in Spanish and said he would not rescind President Obama’s illegal executive Amnesty on his first day in office. I have promised to rescind every single illegal executive action, including that one.

[Audience responds with a mixture “of applause and booing”]. 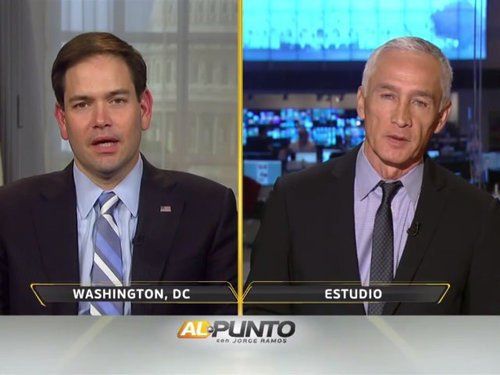 I’m guessing that Cruz was referring to an April 2015 interview, when Rubio appeared on Univision and in a Spanish-language interview with Jorge Ramos, stated he wanted to accomplish the same ends as Obama’s Administrative Amnesty through legislation.

Cruz was correct, of course. But Rubio suddenly interrupted Cruz, just as Cruz was beginning to say “And on that question…”

Now, Rubio could have denied Cruz’s allegation. Or he could have said he was misquoted, mistranslated, or misrepresented in some way.

But how he actually chose to defend himself was revealing.

RUBIO: Well, first of all, I don’t know how he knows what I said on Univision, because he doesn’t speak Spanish. And second of all, the other point that I would make...

We’ll never know what Rubio meant to say “second of all” because he was interrupted by Cruz.

But note that Rubio’s first point was to ridicule Cruz, not for his policies, but for not knowing Spanish.

As I’ve pointed out before, the Spanish-language press seems to believe Rubio is more of an “authentic Latino” than Cruz. Rubio’s snide comment seems designed to fit in with that Narrative. He was trying to appeal to the (mythical in my opinion) Hispanic bloc vote.

After all, Rubio’s comment doesn’t make any sense. Has Rubio not heard about interpreters and translators—or patriotic Americans who know Spanish and try to keep up with this stuff? By now, a lot of informed Americans know about Univision and its agenda. Here at VDARE.COM, we regularly warn Americans about it.

And even if Cruz doesn’t speak Spanish, so what? How does it make a difference in the truth of what Cruz said?

Indeed, Rubio implicitly concedes that things can be said in Spanish that English-speakers aren’t going to know about (unless they are informed by someone who does know Spanish).

That’s precisely what Cruz was trying to pin Rubio down on in the first place. That’s why Americans should vehemently oppose any political use of the Spanish language—because it just helps politicians lie more efficiently.

But as Rubio began his “second of all”, Ted Cruz jumped back into the fray, visibly angered and speaking Spanish. We’ve been told Cruz doesn’t speak Spanish well and he himself has said his Spanish is “lousy.” But here Cruz spoke Spanish very aggressively, as if it were  the beginning of a schoolboy fight. (There’s been some MSM effort to spin this as backfiring on Cruz because his accent wasn’t good.[ Ted Cruz Tried To Show Off His Español To Marco Rubio, But He Fell Flat, by Cristian Farias, HuffPost, February 18, 2016] I think that’s unfair, as the sentence was grammatical.  I had my Mexican wife listen to it, and she thought Cruz sounded like a Cuban, hardly surprisingly.  And it seems a little ridiculous to judge somebody’s language ability on one sentence, although as Federale has pointed out, that’s what our country’s naturalization exam now does.

Cruz is in effect saying: “Yes I do know Spanish, and if you talk to me in Spanish I will understand.”

But why did Cruz respond in this manner? He could have said, in English: “Marco, why are you saying one thing in English and another thing in Spanish?”

This statement could have conceivably put Rubio on the defensive. But even if it didn’t (Rubio can be quite slippery), Cruz would have put the language question front and center in the debate.

And it didn’t work. Simultaneously, Rubio was also talking, changing the subject (“Look, this is a disturbing pattern now, because for a number of weeks now, Ted Cruz has just been telling lies. He lied about Ben Carson in Iowa”.)

The bottom line: Cruz missed an opportunity. It’s disturbing that he didn’t highlight the language issue. And it’s not surprising that Rubio was able to slip away.

Note that Cruz has a Spanish-language portion of his campaign website, and Donald Trump’s website apparently doesn’t. And Trump has already used the language issue against other candidates, as when he called out Jeb Bush by saying Jeb “should really set the example by speaking English while in the United States.”

There’s absolutely no political reason for Republicans to start campaigning in Spanish. Ironically, with all the hysteria about the Hispanic vote and how Trump is going to ruin it for the Republicans, according to a recent poll Donald Trump is actually the favorite among Latino Republicans with 38%, as opposed to 15% for Cruz—and just 8% for Rubio!

While Trump probably won’t get the majority of Latinos in the general election, it’s obviously telling that the two Spanish-surnamed candidates together have a smaller amount of Hispanic Republican support than Trump.

The political use of the Spanish language is a negative development in the U.S. politics. It’s not that I’m against Americans learning Spanish. As I have pointed out, I teach high school Spanish, and I believe some Americans should learn Spanish.

What I object to is the idea that Americans have a civic duty to learn Spanish and that it should be used by politicians and candidates to communicate with American citizens. It threatens our common political culture.

What happened at this debate is just a small example. Cruz made a great point about Rubio’s Spanish-language Hispandering. I’m sorry he wasn’t able to follow up by emphasizing the necessity of English.