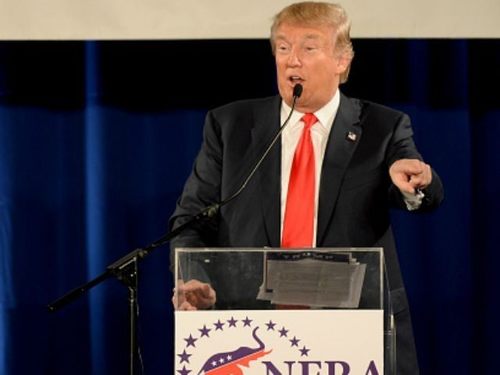 Trump: ¡Jeb! Should be a Better Role Model by Speaking English When in America

From an interview in Breitbart:

“I like Jeb,” Trump said. “He’s a nice man. But he should really set the example by speaking English while in the United States.”

I’d add that Presidential candidates should engage in public discussions in the national language* of the voters so all his cards are conveniently on the table. You’ll notice that liberals are constantly accusing Donald Trump of “dog whistling” in secret formulations that they can’t quite put their fingers on but they are sure that only white racist brains can pick up. Obviously, Trump is the frankest candidate in decades, so there is a huge amount of projection going on here.

But the principle that Presidential campaign discourse should be public and accessible to the vast majority of voters is a good one. And that’s why ¡Jeb! shouldn’t be running an English-language campaign and a Spanish-language campaign. Politicians are two-faced enough without letting them be two-tongued as well.

* If a candidate wants to ride a mule down to the bottom of the Havasupai Canyon and address indigenous Indian voters in Havasupai, that’s fine, but immigrants are supposed to be able to pass an English test to get citizenship and the vote. If they obtained citizenship fraudulently due to a lack of English ability and thus can’t follow what, say, their husband, the former frontrunner, is saying in English, well, too bad.