Memo From Middle America | What Columba Bush, Ethnic Chauvinist, Says In Spanish When Hispandering For The Dynasty 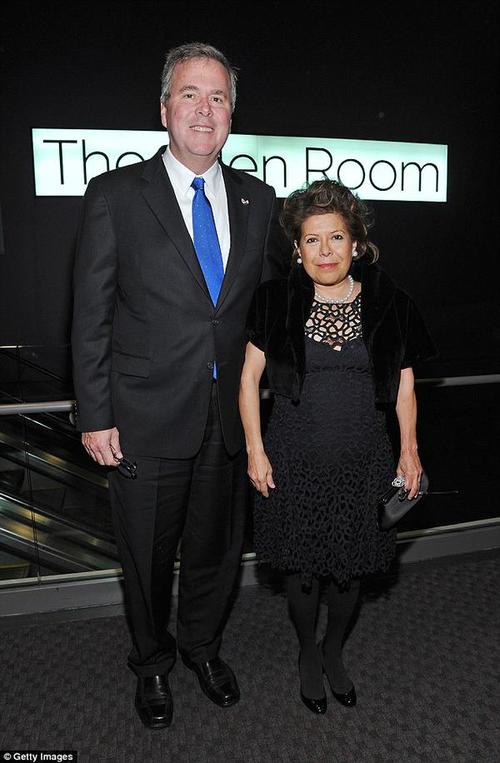 The Main Stream Media tells us Columba Bush, Jeb’s Mexican-born wife, is his “secret weapon” and will help him win a chunk of that elusive-but-just-around-the-corner Hispanic vote [How Jeb Bush’s wife could help win him the White House, by Jonathan Easley, The Hill, January 28, 2015]. But while the MSM gloats that Columba would be the nation’s “first Latino First Lady,” it is less eager to remind Americans of Columba’s long history of Hispandering for the GOP—and of what she actually says when she speaks in Spanish, her preferred language.

Instead, we are treated to hagiography about Mexican teenager Columba Garnica meeting Jeb Bush, marrying in 1974, and living happily ever after [The Year That Changed Jeb Bush Forever, by Michael Kruse, Politico, May 21, 2015].

Despite the alleged impending breakthrough with Hispanic voters, however, we are also told Columba is a very private person, hates politics, and is not comfortable speaking English.

I don’t want to attack Columba personally, and it’s not a bad thing if a politician’s wife wants a private life. We’d all be better off if Michelle Obama kept to herself instead of meddling in school lunchrooms across the nation.

Yet it’s hard for a potential First Lady to stay out of the spotlight. And there are issues here bigger than personalities.

Take language. How can Columba have been married to Jeb for 41 years, residing most of that time in the U.S., serving as First Lady of a major state, and still not be comfortable speaking English?

Actually, given the current linguistic situation in the United States (especially in Miami) and the ins and outs of language learning (in which I’ve been involved for decades), I find it totally believable.

Fluency in a foreign language does not mean one speaks it perfectly, or like a native. Fluency is fluidity—the ability to converse in a language, to ask and answer questions, and give and take.

Apparently Columba Bush fits into that category. At a Congressional hearing in 2003, for example, Columba gives a short statement (beginning at 22 minutes on this video) and you can note her thick accent. Note how she pronounces “girls” as something like “girrs.” [Girls and Substance Abuse, C-SPAN, February 5, 2003]

Nor is it strange that she’d speak with an accent. Foreign language speakers speak with accents every day and are still understandable.

Nonetheless, after decades of living in the U.S and being married to a gringo—and not just any gringo, a Bush—you might expect her to talk more fluently. Jeb, in contrast, is very comfortable speaking Spanish.

But, remember, the family speaks Spanish at home and has lived in Miami for many years. Indeed, even as Florida’s First Lady, Columba was unhappy in Tallahassee, the state capital, and preferred Miami.

As a counter-example, let me offer my own situation. Like Jeb, I have a Mexican-born wife, though my wife Lilia and I have been married for less time and have lived in the U.S. for only seven years.

We speak with each other in Spanish, a habit we developed before we got married. And she speaks with our sons in Spanish. But I speak to our sons in English, and have since they were babies, regardless of where we lived.

Lilia speaks and understands English very well, and is comfortable speaking it. (She was once my student, so if she didn’t that might be a reflection on me!)

We currently live in a community in the United States without many Spanish-speakers. Lilia conducts the vast majority of her activities outside the home in English (and inside the home when she’s watching television or helping with homework). In fact, once we were negotiating a loan in the bank and she picked up a detail that I missed.

In fact, far from guarding Columba’s privacy, the Bushes have been having Columba Hispander for them for decades.

Reportedly, Columba became a U.S. citizen so she could vote for her father-in-law George H.W. Bush,—something she called, ignoring the implied insult to Americans, a “difficult decision”. [The Mysterious Columba Bush, by Hanna Rosin, The Atlantic, June 2015].

During the 1988 Republican convention, in a carefully-scripted and choreographed nomination process, Bush I was nominated by Phil Gramm, and then seconded by a whole succession of speakers crassly chosen to represent geographical and ethnic diversity, including Elaine Chao, Bob Dornan and the late Joe Paterno.

The final seconder: none other than Columba Bush, daughter-in-law of the candidate, who delivered her seconding speech in Spanish. [Nomination of Bush as Pres. Candidate, CSPAN, August 17, 1988, 1 hour, 3 minute mark].

But it gets worse, as you can see in this 1988 campaign ad (if you don't see the video, click the link below)

The people in the ad are Columba, her three children (George P., Noelle and John Ellis) and father-in-law/grandfather George H.W. Bush.

First, Columba speaks in Spanish about how father-in-law Bush is going to look out for the interests of Hispanics. (Do they have different interests from the rest of us?)

This election can be the most important in our history.

For the first time, our voice can be heard.

For the first time we can elect a president who worries about us, who understands the values and our traditions of our families.

For the first time, all this will be possible,

Believe me, or ask my father–in-law.

Then, George W. Bush says in English (with Spanish subtitles)

As President, I have a lot of reasons to help Hispanics everywhere, because I’ll be answering to my grandkids, not just to history.

The Great White Benefactor, dispensing benefits to the Hispanic Masses in return for political support!

So Bush Dynasty Hispandering is not new. It didn’t start with Dubya, it started with Daddy Bush back in the 1980s. Twenty-seven years later, they’re still at it.

Needless to say, the Bushes have never been able to get most Hispanics to go along with it. But they have been able systematically to betray their own (essentially white) base.

The question now: how long will the historic American nation let Jeb get away with it?