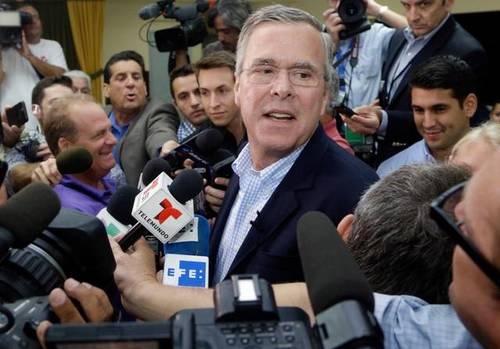 Campaign Strategy Memo to ¡Jeb!: Spanish Is Uncool, Even to Spanish-speakers

I understand why Jeb Bush would assume that his campaigning in Spanish about how Donald Trump isn’t a true conservative makes Jeb look cool. After all, his wife only speaks Spanish, and who is cooler than Columba Bush?

What Jeb doesn’t comprehend is that speaking Spanish isn’t very cool these days even to Spanish-speakers everywhere in the U.S. except Miami. Jeb lives in South Florida where there are a lot of rich, stylish upper crust folks from Latin America, so he gets a distorted picture. Sure, Jeb’s world is full of Ferrari-driving Spanish-speakers who are worried that Trump might undermine the carried interest deduction for hedge funds. But Jeb attacking Trump in Spanish for not being a true blue Republican reflects the peculiar demographics of Jeb’s daily world.

The current uncoolness of Spanish in the rest of the country can be seen in the lack of demand in America for current pop culture products dubbed into Spanish. For example, even in Southern California, blockbuster movies are seldom released dubbed into Spanish. I could drive today to the City of Commerce to see Mission Impossible: Rogue Nation with Spanish subtitles, but I can’t find any evidence that the Tom Cruise movie is playing dubbed into Spanish anywhere in Southern California. At the City of Commerce theater, eight of the 14 films are showing with Spanish subtitles, but none are dubbed.

Here in the San Fernando Valley, home to 700,000 Latinos, Mission Impossible doesn’t appear to be playing even with Spanish subtitles anywhere. At the Plant 16 (owned by the same chain as the City of Commerce theater) in largely Hispanic Van Nuys, a working class but not impoverished part of the San Fernando Valley, none of the current 16 screens are showing Spanish subtitles, much less using Spanish dubbing. (Later this week an animated film from Mexico in Spanish will be debuting there, however.)

This isn’t part of a conspiracy by Hollywood to assimilate young Latinos into speaking English. If there was much demand, the industry would be happy to meet it. For example, when searching Google for a general article about dubbing movies into Spanish for release in America, the most recent one I found was this one from 1986 about how Steven Spielberg was experimenting with having films he produced like E.T. and American Tail released in Los Angeles dubbed into Spanish.

But that hasn’t much caught on over the last 29 years. Why? One reason is because young people in Van Nuys associate speaking Spanish with talking to their grandmothers. In contrast, when they go out on the town, they want to hear Vin Diesel, Paul Walker, Chris Pratt or Adam Sandler speaking English, because English is cool. Spanish isn’t.