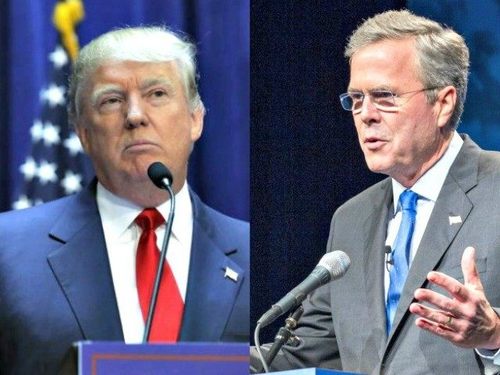 ¡Jeb! Slams Back at Trump ... in Spanish

Jeb Bush, with Donald Trump on his mind, takes the border

MCALLEN, Texas — In this predominantly Hispanic border town, Jeb Bush dismissed Donald Trump’s proposal of building a wall to stop the flow of undocumented immigrants through Mexico and called for “a comprehensive” border security strategy — and he did it mostly in Spanish.

Comparing the two videos from the same event, Jeb is a more appealing speaker in Spanish. He seems more like a plausible leader when speaking his confident, personable Spanish than he does when speaking English, a language in which he seems weak, uncomfortable and furtive:

If American citizens were given the right to vote for President of Mexico, I’d vote for ¡Jeb!

“Mr. Trump’s plans are not grounded in conservative principles,” Bush said during an appearance at a Mexican restaurant Monday afternoon.

“His proposal is unrealistic. It would cost hundreds of billions of dollars. It will violate peoples civil liberties. It will create friction with our third-largest trading partner that’s not necessary, and I think he’s wrong about this. If he’s serious about this, he might want to read my book, “Immigration Wars,” which I published four years ago.”

The visit to this south Texas border town, an arid patch of used car lots and agricultural warehouses just north of the Rio Grande where 90 percent of the population speaks Spanish, comes as Bush continues to feud publicly over immigration issues with Trump, who currently leads all comers in the GOP nomination fight. …

“What’s happening here on the border is really bad; it’s becoming a Third World country, almost,” said Aurora Blanco, a beautician from McAllen who is a Republican and open to supporting Bush. “The border — they haven’t fixed it and we need somebody to start again with new fresh policies.”

Bush, who has seen his poll numbers dip in the past month, has drawn criticism from two different directions on the issue of illegal immigration — from Trump, who has blasted him for not taking the problem seriously enough, and from those on the left, offended by his use of Trumpian language last week.

Last Wednesday, just as Bush started to intensify his criticism of the New York City businessman for not being a true conservative, the former Florida governor was put on the defensive over his use of the term “anchor babies” in a radio interview.

Bush declined to comment on Trump’s statement and chided the media for allowing Democrats to take his statement “out of context,” noting that he has been “immersed in the immigrant experience” in his upbringing in Texas, his 41-year marriage to a Mexican woman and their bilingual children.

“This is ludicrous for the Clinton campaign and others to suggest that somehow I was using a derogatory term,” he said, before offering a new explanation of what he was trying to say last week in talking about “anchor babies.”

“What I was talking about was the specific case of fraud being committed where there’s organized efforts — frankly, it’s more related to Asian people coming into our country, having children in that organized efforts, taking advantage of a noble concept, which is birthright citizenship.

“I support the 14th Amendment,” he continued. “Nothing about what I’ve said should be viewed as derogatory toward immigrants at all.

“I think we need to take a step back and chill out a little bit as it relates to the political correctness that somehow you have to be scolded every time you say something. It’s not fair to be taken out of context.”

Democrats, however, blasted Bush again for “tripling down” on the anchor babies line, Jeb’s apparent effort to talk about birth tourism, a recent trend that has seen families, many of them Chinese, willing to pay large sums to have their children born in the United States.

“This latest comment from Bush shows just how out of touch he is,” said the DNC’s director of Asian American and Pacific Islander Engagement, K.J. Bagchi. “The only thing worse than Jeb Bush’s words about immigrant families may be his policies towards them.”