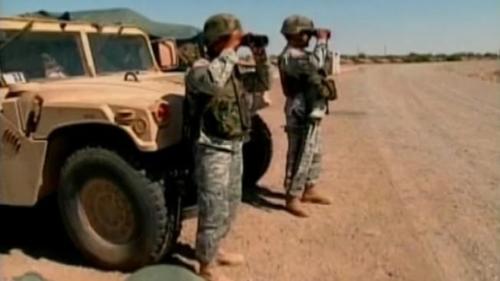 Ten years ago, I was deployed with the Texas Army National Guard to Iraq. In fact, it was on Thanksgiving Day 2005 that I was informed that I was to fly out of Iraq the next morning. While we were still training stateside, we were told that “we have to fight them over there so we don’t have to fight them over here.” But the fact is that today, thanks to our immigration policy, a whole lot of “them” are already “over here.” And we’re getting more and more of them. “Fighting them over there” didn’t work—if it that was ever the idea.

Of course, as we are constantly told, most Muslims are not terrorists. But as the Muslim population increases, the pool of potential terrorists is also increasing, not to mention the even greater danger of political infiltration.

Yet our bipartisan leadership is clearly determined to bring in even more and more.

Speaking in Malaysia recently, Obama promised to keep taking in refugees “as long as I'm president we are going to keep stepping up." Obama visits Asian refugee center amid raging debate in US, by Josh Lederman, AP, November 20, 2015)

(The “refugee center” Obama visited in Malaysia houses Rohingya—a Muslim ethnic group in Burma, a majority Buddhist nation. But supposing the Rohingya were not Muslim, would Muslim-majority Malaysia be taking them in?)

Nor does newly-elected GOP Speaker of the House Paul Ryan want to limit Muslim immigration. When the topic came up on the Hannity show—apparently even Sean Hannity is starting to figure out demographic issues!—Ryan responded:

Well, first of all, I don’t think a religious test is appropriate. That’s not who we are. We believe in the First Amendment of religious freedom. ... I think a security test is the proper test.

Paul Ryan Tells Sean Hannity He Will Not Support Any Cuts To Muslim Immigration: ‘That’s Not Who We Are’ , by Julia Hahn, Breitbart, November 19, 2015

Oh yeah? In the first place, Speaker Ryan, the constitutional injunction against a religious test has nothing whatsoever to do with immigration policy. The United States can permit or deny entry to any foreigner on any basis it chooses.

In the second place, “That’s not who we are” is hardly a rigorous argument—especially when the U.S. did use religious tests to admit, for example, Soviet Jews.

So where does Ryan explain why the mass immigration of Muslims is good for the United States and the American people?

Of course, he claims to support security checks of the “refugees.” But, honestly, who really believes that any serious checks are going to be made? What, are they going to write a letter asking the Syrian government to vouch for the “refugees”?

Even under ideal conditions, the Arabic surname system is more complex than our English surname system, and even their alphabet is incompatible with ours. That makes it even more difficult to verify who people are than with Mexicans, and that’s bad enough.

But these aren’t ideal conditions—with a civil war raging in Syria and rampant identity fraud being carried out on an international scale.

Don’t take my word for it. James Comey, the FBI director himself, has said that it’s “impossible” for his office to vet every Syrian refugee. [FBI Director: It’s ‘Impossible’ To Vet Every Single Syrian Refugee [VIDEO] by Christian Datoc, Daily Caller, November 19, 2015]

Tellingly, the Obama administration won’t even respond to a letter sent to it by Senators Ted Cruz and Jeff Sessions, asking about the immigration histories of 72 specific individuals charged with various forms of terrorism in just the past year [No Answer For Senators on Immigration History of US Terror Suspects, by Rachel Stoltzfooss, Daily Caller, November 17, 2015]

And the whole Middle East “refugee” flow is now flowing into the Western Hemisphere route to the U.S.A., as a number of recent incidents demonstrate clearly:

And this is probably the tip of the iceberg. But then, our leaders don’t want to secure the border anyway, so why is it surprising that it would attract Middle Easterners just as it attracts Latin Americans?

The common denominator: our bipartisan leadership is electing a new people by any means necessary.

Refugee RacketCamp Of The Saints
<< Previous
Next >>
LATEST