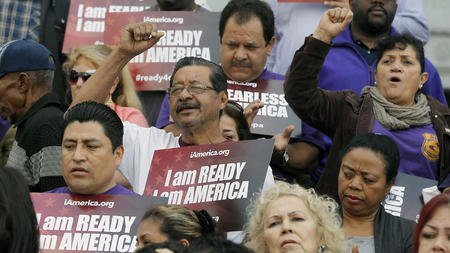 It's a rare occasion when conservatives can cheer the judicial branch of the federal government, but a federal appeals court has thrown up another roadblock to Barack Obama's illegal and unilateral plan to impose amnesty on Occupied America.

A federal appeals court dealt a severe and possibly fatal blow Monday to President Obama’s executive actions to allow up to 5 million immigrants living illegally in the United States to stay and obtain work permits.

The decision by the U.S. 5th Circuit Court of Appeals may have come too late for the administration to appeal to the Supreme Court and win a reversal before Obama leaves office.

This ruling by the Appeals Court actually expands the rather technical grounds relied upon by Andrew Hanen in his initial initial ruling. While the Appeals Court called Hanen's ruling "impressive," it critically expanded the battlefield to discuss President Obama's lack of legal authority for his actions.

The 5th Circuit opinion actually goes further than Hanen's, holding not just the administration took shortcuts with procedural rules, but that Obama and Secretary of Homeland Security Jeh Johnson lacked the legal authority for their actions. [Judge] Smith said the Immigration and Naturalization Act simply doesn't confer the power the administration is claiming.

Republicans celebrated the ruling, mostly, one suspects, because it saved them the responsibility of having to do anything. Yet even as the courts (for once) acted in defense of the rule of law, cringing mooncalf and new Speaker of the House Paul Ryan decided now is the perfect time to open the floodgates to more low skilled immigration.

The first immigration bill introduced under Rep. Paul Ryan’s speakership Wednesday would bypass the annual 66,000 cap on H-2B work visas by allowing foreigners admitted in any of the three previous years to remain and not be subject to the cap.

Critics say it will lead to more competition for what are often middle-class American jobs and will eventually lead to more illegal immigrants as the foreign workers overstay their visas.

This is literally the first thing this traitor did as Speaker. If Obama decides to disregard the Court and push forward with his amnesty, something tells me Ryan won't do much to resist.