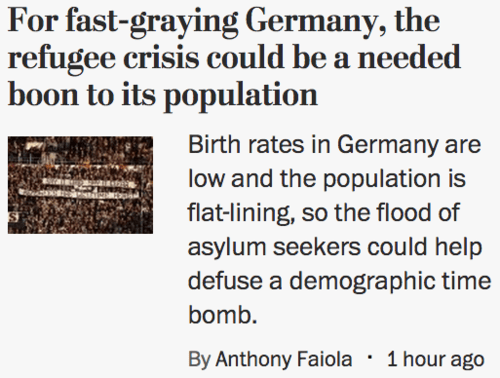 WaPo: "Flood of Asylum Seekers Could Help Defuse a Demographic Time Bomb"—But What About Real Bombs?

Above is from the front page of the Washington Post.

When I was in the market research business back in the last century, the word “demographics” was understood to have a multidimensional meaning. It referred to things like sex, race, religion, age, education level, marital status, income, language, own or rent, and so forth, almost ad infinitum.

I’ve noticed, however, that as part of the Narrowing of the Western Mind, the word “demographics” increasingly means only “age,” and with that the assumption that young is better. Without that intellectual impoverishment of the term “demographics,” the phrase “defuse a demographic time bomb” would strike editors as obviously comic, if not sinister.