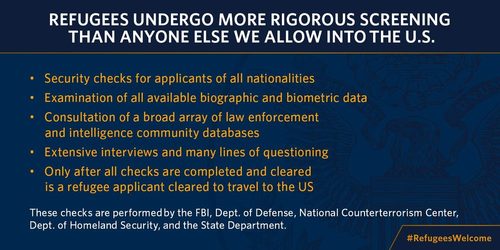 Americans keep being hectored to take "refugees" from terrorist-producing countries because to do otherwise would be "a betrayal of our values," as President Obama said on Monday.

The rise of Donald Trump reminds us of the popularity of another, long-forgotten American value: protecting Americans.

Contrary to Obama's laughable reference to "the universal values" that "all of humanity" share, most of the world does not share our values, at all. They barely seem to share our DNA. As indignantly explained by the lawyer representing two Iraqis accused of child rape in Nebraska, America's views about women and children "put us in the minority position in the world."

The New York Times boasts about how amazingly painstaking the "vetting" of Syrian refugees will be, but I notice the main point the paper keeps stressing is how long it will take. Twenty-four months!

"Waiting" is not "vetting." What is 24 months to people who can hold a grudge for a thousand years?

As we found out from Michael Steinbach, assistant director of the FBI, in congressional testimony last month, there are no Syrian computer databases for our investigators to use in their famed "vetting" of refugees.

"You're talking about a country that is a failed state, that does not have any infrastructure," he said. "So all of the data sets—the police, the intel services—that normally you would go to seek information don't exist."

It seems that another value the rest of the world doesn't share with the West is our painstaking record-keeping. There's no Syrian FBI running the National Crime Information Center. Syria barely has a phonebook.

It's possible that during that agonizing 24 months of waiting, someone will warn our immigration officials about particular refugees. Then, our government will admit them anyway—as they did with Boston Marathon bomber Tamerlan Tsarnaev.

Tamerlan's suspected co-conspirator in the murder of three Jews, Ibragim Todashev, was another beneficiary of America's generous humanitarian policies—humanitarian toward foreign criminals and terrorists, monstrous toward Americans.

Our crack investigators admitted Todashev after concluding he had a credible fear of persecution in Chechnya. Meanwhile, his own father said, "He has nothing to fear ... he would have faced no oppression."

Good job, meticulous vetters! (Luckily, during an interrogation after the Boston Marathon bombing, Todashev attacked an FBI agent and got himself killed, saving the taxpayers 60 years of room and board.)

American officials were also warned about the blind sheik, Omar Abdel-Rahman, not only by U.S. consular officials in Egypt—but by Hosni Mubarak, the president of Egypt himself.

But the Blind Sheik was allowed to go about his business in America, plotting terrorist attacks with other widows and orphans, such as Ramzi Yousef, mastermind of the 1993 World Trade Center bombing—and American asylee.

Under our immigration policies, being a member of a noted terrorist group qualifies you to come to America; being a talented scientist from Switzerland does not.

Our aggressive refugee vetters couldn't even figure out which Iraqis were helping American troops during the war and which were trying to kill them. During the terrorism prosecution of Iraqi "refugees" Waad Ramadan Alwan and Mohanad Shareef Hammadi, the FBI produced Alwan's fingerprints from IEDs that had been used against American troops in Iraq.

Talk about a fine-toothed comb!

Obama pulled every last American troop out of Iraq, then brought enemy troops to America, as refugees.

Incidentally, every one of these terrorists was a "legal" immigrant. How many World Trade Centers, Boston Marathons and Fort Hoods do we need before Republicans drop the "Illegals, bad; Legals, good" shibboleth?

Some Republicans have called for admitting only Christian refugees—the main point of which is to allow Jeb! and Rubio to talk tough on immigration, without alienating their imaginary Hispanic base.

Fazliddin Kurbanov was admitted as a Christian refugee in 2009 from the booming world power of Uzbekistan. He claimed that he and his family were being persecuted in the majority Muslim country.

Soon after arriving, Kurbanov realized: He was a Muslim, after all!

He began communicating with the Islamic Movement of Uzbekistan, telling them: "We are the closest ones to the infidels .... What would you say if with the help of God we implement a martyrdom act?"

At trial, Kurbanov's defense was that he was just trying to get information on the terrorists in order "to capture them."

The jury was unconvinced, perhaps swayed by the stores of ammonium nitrate, acetone, aluminum powder and Tannerite found in Kurbanov's apartment. Our immigration officials would have found Kurbanov's story as believable as his Christianity.

America is under no obligation to admit anyone, least of all perpetually aggrieved, welfare-dependent Muslims, some percentage of whom, we know to a certainty, will end up being terrorists.