Letter From Baltimore: We’re Going To Be Detroit, Sooner Rather Than Later—But What About America? 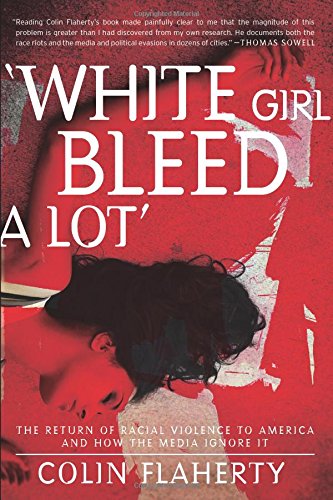 VDARE.com readers have probably heard enough about Baltimore, which arguably lost its last intelligent public voice the week Henry Mencken died. Not that long ago, really…1956. But it isn’t often you get to watch a city die in real time. And you have to wonder: will this happen to America?

Baltimore’s last few weeks have brought a dozen or so street attacks by young black gangs on whites (and on a few blacks, too), a pistol-whipping by black teens of a white resident in an upscale neighborhood, at least 11 carjackings, a runner pushed into the harbor, and—as only one measure of what the future holds—the news that in 13 of the city’s 39 high schools, not a single student tested as proficient in math. 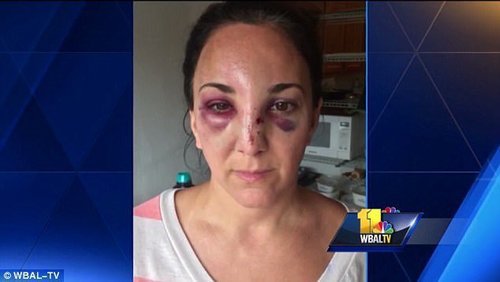 Of course, the beatdowns and robberies are all for fun, for the most part. Colin Flaherty is right, white girls do bleed a lot. The young woman pictured right made the U.K. Daily Mail after being set upon by a gang of eight or more, including girls wielding boards, in a neighborhood popular with prosperous young urbanites. [Halloween horror as woman is left with a broken nose and eye socket after being attacked by TEN teens brandishing wooden bats - the FOURTH time gang have targeted upscale Baltimore neighborhood, by Keith Griffith, November 11, 2017.] The attack left her with a broken nose and a broken eye socket.

'I feel lucky to be alive': Woman jumped, savagely beaten by 10 teens in Baltimore https://t.co/z39ZB4IVQH pic.twitter.com/Uf0hBFn9rf

So far, the fun hasn’t resulted in a killing. But it fits into this context: Baltimore seems likely once again to end the year with the highest or second-highest per capita homicide rate in the U.S. The slightly undercounted murder toll: 303 (undercounted because it excludes, for example, 66-year-old Margaret Hall, who was killed in August when a gang member fleeing police crashed into her car). This total is higher than that of New York, which is 14 times Baltimore’s size. Hide the bodies as you will, the city is on track for upward of 350 homicides, for a rate of almost 57 per hundred thousand. That’s ten times the national average. (St. Louis aims again for top billing at about 63 per 100k.)

The local response is interesting. If events come on a weekend, they get lost on the Baltimore Sun’s website, where the top news after a half-dozen Halloween beatdowns was about the local football team’s loss (with a catchy “5 Things We Learned” from the state U team’s loss a few decks down). That’s what matters in a shrinking, 62% black, formerly industrial city.

The focus makes sense, because you can do something about football failures. You can’t do anything about crime in Baltimore, and any five things we might learn from observation would have to be unlearned in a hurry, in the name of Political Correctness.

So “Five Things We Learned from Gang Assaults and 303 Murders” won’t be a headline you see anytime soon.

To all appearances, Baltimore hasn’t learned a thing.

A few particulars. The beatdowns drew attention from television news because so many involved white people being targeted in neighborhoods that draw tourists, students, and comfortable locals.

“I feel lucky to be alive,” the young woman above said. “It could have been a lot worse.”

A family from New Jersey that was attacked on October 21 at the Inner Harbor—the city’s main tourist destination—offered somewhat harsher sentiments, vowing never to return. “They swarmed us. They hit my husband in the head. They knocked him out…and then it was just complete bedlam” [ NJ Family Visiting Baltimore Haunted By Random Teen Attack At Inner Harbor, by Alex Demetrick, CBS Baltimore, October 30, 2017].

The same night, visitors from the Maryland suburbs were attacked. These victims were African-American. 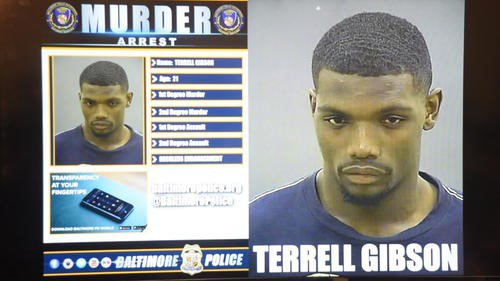 To appreciate Baltimore, it helps to know that in July, Smith’s brother, who’d had a few arrests, was recently shot to death in his home—pictured right, the “man charged.” [ Man charged in shooting death of Dionay Smith, By Michael Brice-Saddler, Baltimore Sun, July 9, 2017 ]

Usually there’s no convenient footage, but in March a man was chased by a gang along Calvert Street in broad daylight and robbed of his phone within a couple blocks of the Courthouse and there was video:

As to the public sector response, it came at the end of this week—from Mayor Catherine Pugh. [Email her]

Having removed offensive statues in the summer, she might have thought all was looking up. Unfortunately, the gang suspects shown at the top may not have known who Roger Taney was—or that they’d been liberated.

Or maybe the gangbangers did sense the last. If they’re bright enough to have a sense of humor, Pugh supplied material. Rather than a “get tough” policy on juvenile crime—which the quivering white police commissioner had floated—Pugh took a…holistic approach. For once, the language of the Baltimore Sun can’t be improved on:

The mayor ordered the directors of more than half of the city’s 55 departments to report to meetings daily at 8 a.m., when they will plan with Police Commissioner Kevin Davis where weeds should be cut, lead paint covered and drug houses boarded up and job applications can be handed out, among other tasks. . ..

“Violence in the city is out of control,” she said. “I want every neighborhood to know I am extremely concerned and focused on reducing violence.”

Among other casualties in Baltimore is the possibility of satire. The Sun’s editorialists immediately came to Pugh’s support—and chastised Commissioner Davis. Yes, tying up the BPD with discussions of weed-cutting might have some downside, the editorialists acknowledged, but “[p]anic over youth crime in Baltimore is not new; every few years, a string of incidents captures the public’s imagination and leads to calls for police to do something;” and

the one approach we know [that] will not solve the problem and will likely make it worse is to punish more young people in the adult criminal justice system. Whatever benefit may be achieved by taking youth offenders off the streets today will come at a tremendous cost when these young people eventually emerge from adult prisons.

Curiously, this view differs significantly from that of VDARE.com Editor Peter Brimelow: The Answer To Race Riots Is Ruthless Coercion. What Is America Waiting For?

My comment: Could it be that if people who commit armed robbery at age sixteen remain a threat to society at twenty-five, they should never emerge?

And some city leaders make the point more broadly. City Councilman Brandon M. Scott [Email him]is chairman of the council’s public safety committee. “We have been treating the disease of gun violence using policing, and we were wrong in that,” Scott said recently. “Gun violence is a disease and should be treated from a public health standpoint” [As Baltimore’s Homicides Reach 300, Activists Call for Another Cease-Fire Weekend, by Ericka Blount Danois, The Root, November 3, 2017]

Oh yeah? This “disease” is called “free will.” 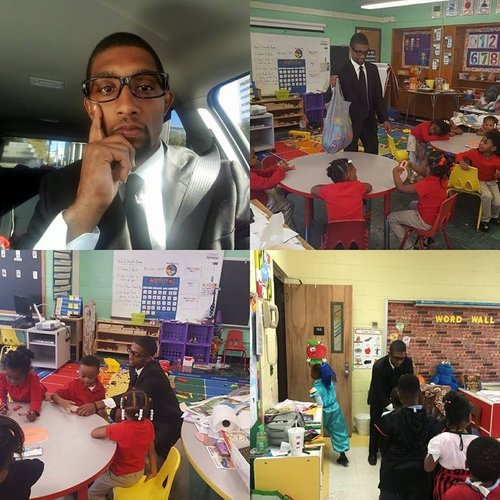 It’s interesting that a population so steeped in the mythos of slavery—when free will was in fact denied their ancestors—doesn’t dare accept that. Greeting Mayor Pugh’s new initiative, City Councilman Scott expressed approval: “He said that addressing broken street lights, vacant buildings and other problems can cut down on crime,” the Sun reported.

While younger African-Americans were attacking more than a half-dozen people in the Federal Hill neighborhood on Halloween, Councilman Scott dressed up as Malcolm X and visited District 2 classrooms distributing treats. 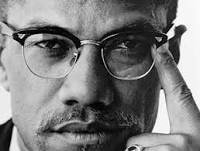 This recent violence is the surface decay. The social rot in Baltimore is broad and deep. Since the summer, Feds have charged eight Baltimore police detectives with crimes including armed robbery that were committed while they worked in cahoots with a heroin gang. Press releases from the Department of Justice, U.S. Attorney’s Office, District of Maryland: 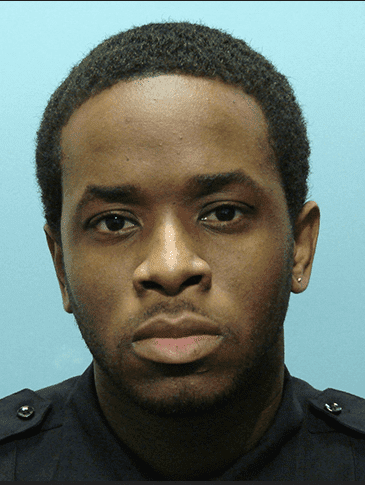 Pictured right: Detective Momodu Bondeva Kenton Gondo. None of the coverage says he’s a Nigerian immigrant, as his name seems to suggest. But then, none of the coverage says the detectives are black. Since the indictments, which hit Gun Trace Task Force members, gun arrests have dropped by “hundreds,” according to the Sun [ Baltimore gun arrests decline by hundreds after indictments of Gun Trace Task Force members,  By Luke Broadwater and Kevin Rector, November 9, 2017]

Perhaps it’s too much to expect a police force to be significantly better than the community from which it’s drawn, unless you can imagine some outside source of moral authority. Baltimore is under black political control, with a few leftover white enablers. Its Political Class is drawn from a community that blames everything except human agency for black failure. Priorities—removing Confederate statues and restricting police action to that which is acceptable to the crime-ridden and crime-prone community—are set accordingly.

Under a settlement with the Obama Justice Department, Baltimore policing hereafter is under the supervision of a civilian oversight panel drawn from these constituents [ Pugh appoints nine to Baltimore Civilian Oversight Task Force mandated by consent decree , By Kevin Rector, Baltimore Sun, November 9, 2017

Anyone expecting a crackdown on violent crime is deluding himself. City Councilman Brandon Scott, representing the community, will cry foul.

This social infection has spread to every aspect of Baltimore life. The schools with the lowest proficiency rates have the highest graduation rates, thanks to falsified grades.

And, as noted above, at 13 of the city’s 39 high schools, not a single student tested as proficient in math.

Top pay for principals at these schools is $179,000. Baltimore spends $15,564 per student annually, fourth-highest among the U.S.’s hundred largest districts. [For Md. schools, more money is not the answer, By Christopher B. Summers, Baltimore Sun, March 1, 2017

There’s clearly something wrong that decades of money and good intentions haven’t fixed.

A shocking thought: It may be the population.

You stop for breakfast at an inner-city diner frequented by cops, and the African-American grill cook complains about the BPD not stopping the drug trafficking behind his house. “I keep calling [the police] and nothing happens. Why don’t you do something?” he demands of a fat black cop.

Replies the cop, “I don’t want to lose my job.”

The Mayor has had one big-ticket solution, not to crime but to homelessness: Raise $350 million from mostly private sources to build housing and provide services for the poor.

Along the same lines, in October, the city entered a settlement with the Department of Housing and Urban Development—that’s Trump’s HUD!—by committing to provide 1,500 low-income housing units for the poor in “communities of opportunity” [ Creating opportunity for Baltimore's children Baltimore Sun, Editorial, October 4, 2017]

So Baltimore’s future is taken care of, thank you.

But what about America?