Another Triumph Of The Late Obama Age Collapse: Baltimore Cops Shot At Sunday Night, 2nd Time In Past Week 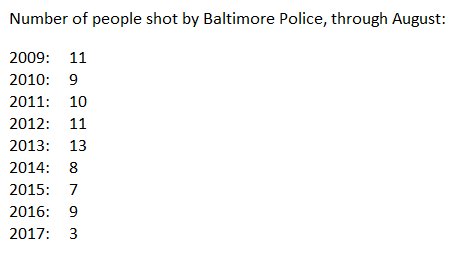 So, Baltimore 2017 counts as a triumph of Black Lives Matter.

Here’s a question inspired by Baltimore: Nationally, have more blacks been murdered by other blacks due to the Ferguson Effect in the three years since Black Lives Matter emerged than were lynched in the entire history of the United States?

If on the day before the Black Lives Matter movement emerged in August 2014 with backing from the Obama Administration, the prestige press, and respectable NGO’s like Soros, you had projected the number of blacks who would be murdered by other blacks over the next three years, based on the long term decline in homicides due to better medical care and more electronic surveillance making it harder to get away with murder … have the incremental above-trendline number of blacks murdered by other blacks since Ferguson three years ago exceeded the number lynched in history?

The NAACP says that 3,446 blacks were lynched in American history.

A lot of evidence suggests that the murder spike over the last three years has been largely confined to heavily black cities. If all of the increase in homicides post-Ferguson has been blacks killing blacks, then the incremental number of black deaths since Ferguson must by now be over 5,000, or at least 1.5 times the total number of blacks lynched ever.

Many thousands of additional murdered blacks sounds pretty bad. But that’s just my reprllent opinion. For a more respectable perspective on all the dead black bodies with holes in them that have been piling up since the advent of #BlackLivesMatter, here’s the New York Times:

The idea that the police have retreated under siege will not go away. But even if it’s true, is it necessarily bad?

What if the police are pulling back not because they feel under siege, but because the protests have made them more sensitive to community concerns? What if they are just doing what the critics want?

It is possible to draw that conclusion from a new, yet-to-be-published study of 118 police departments in Missouri by Professor Pyrooz and his co-authors.

The number of traffic stops, car searches and arrests declined from 2014, the year Mr. Brown was killed, to 2015, especially in communities with a larger share of African-Americans. When the police did conduct a search, they were more likely to find contraband, suggesting that they were using better judgment. The changes were unrelated to fluctuations in crime.

Scholars like to call such pullbacks “de-policing,” which sounds like something no community would want. But Professor Pyrooz argues, “Some places are overpoliced, and de-policing is actually a good thing.”

That’s the final line in the NYT article.