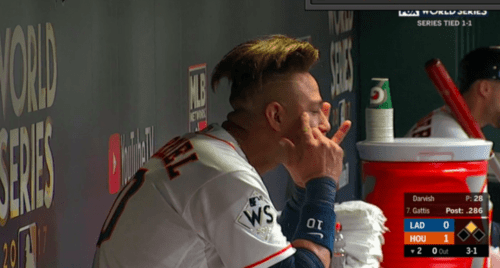 Steve Sailer did a blog titled Asian Journalist Cherishes Memory of Being Otherized 50 Years Ago, a fair description of Baltimore journalist Fern Shen's November 2 NYT Op-Ed How Racism Made Me a Dodgers Fan.

The recent incident where one non-white immigrant MLB player made "Chinese eyes" at another (offender Yuli Gurriel,is a Cuban-Hispanic of apparently mixed ancestry, offendee Yu Darvish is Iranian and Japanese) brought back memories of her 1960s girlhood where she was the only Chinese child in a majority-white (luckily for her—the other choice in those days was majority black) classroom and rotten little kids  would do this to her.

However, I failed to note this:

So it was a bit of a shock to be confronted recently by some young white children in a supermarket parking lot in Baltimore. They were up in my face, doing the old ching-chang-charlie gibberish. It didn’t upset me so much as startle me; it was like seeing a ghost.

Yes, it's important to note when the people hurling racial abuse at Asians are white—since it happens so rarely.  (Steve Sailer commented that "Baltimore, of course, is notorious for its roving gangs of racist white children.")

It reminded me of a blog I wrote 9 years ago, about a Filipino teacher in Baltimore, who also received a lot of abuse:

Danilo Danga, 33, is in his fourth year teaching special education at Baltimore's Calverton Elementary/Middle School. He taught English and social studies in the Philippines for eight years.

At first, he says, students disrupted class and cursed at him, yelling, "Shut up, Jackie Chan!" and other taunts.

Colleagues advised him to assert himself and offer rewards for good behavior. He did. Among the rewards was Filipino chicken adobo he cooked himself.

"Each year is becoming better and better," he says. "I'm excited to come to school every day despite all the challenges." [Schools in need employ teachers from overseas, By Emily Bazar,USA TODAY October 22, 2008]

My first thought was “What kind of rotten little kids yell 'Shut up, Jackie Chan!' at an Asian immigrant teacher?” and my second thought was “I bet I can guess!” (The school Danga taught at was 4 percent non-Hispanic white.)

Anyhow, while I willingly concede that the rotten little kids who did this to Fern Shen were badly brought up, she was obviously better off in a Catholic school in New Jersey in the 1960s than Ying Ma (author of Chinese Girl In The Ghetto) was as an immigrant to Oakland, California:

"During my secondary school years, racism, and then the combination of outrage and bitterness that it fosters, accompanied me home on the bus every day. My English was by now more fluent than that of those who insulted me, but most of the time I still said nothing to avoid being beaten up. In addition to everything else thrown at me, a few times a week I was the target of sexual remarks vulgar enough to make Howard Stern blush. When I did respond to the insults, I immediately faced physical threats or attacks, along with the embarrassing fact that the other "Chinamen" around me simply continued their quiet personal conversations without intervening. The reality was that those who cursed my race and ethnicity were far bigger in size than most of the Asian children who sat silently.

The racial harassment wasn't limited to bus rides. It surfaced in my high school cafeteria, where a middle-aged Chinese vendor who spoke broken English was told by rowdy students each day at lunch time to "Hurry up, you dumb Ching!" On the sidewalks, black teenagers and adults would creep up behind 80-year-old Asians and frighten them with sing-song nonsense: "Yee-ya, Ching-chong, ah-ee, un-yahhh!" At markets and in the streets of poor black neighborhoods, Asians would be told, "Why the hell don't you just go back to where you came from!"

Black Racism: The Hate That Dare Not Speak Its Name, by Ying Ma, published in The American Enterprise, November 1998.