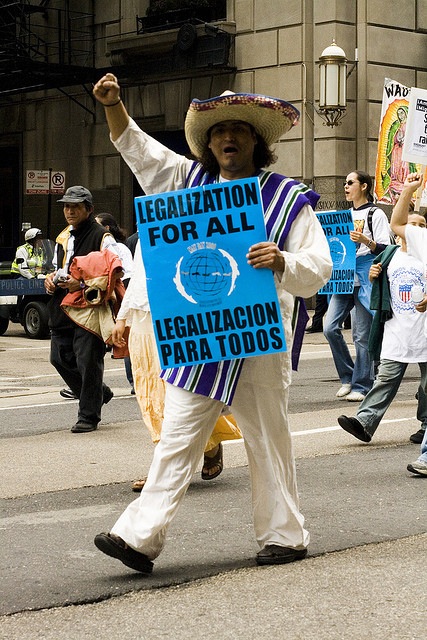 has been published, and he is trying to thread the needle between rewarding illegal behavior and punishing it.

The former governor’s solution is to give legal permanent residency to foreign lawbreakers. That would please the job grabbers just fine, but whole-enchilada border busters like Frank Sharry say no way, such a strategy would create a “permanent underclass.”

Unlike the illegal aliens themselves who care only about the money, the raza gang is more concerned with gaining additional political power and establishing a permanent Democrat majority via demographics.

No illegal aliens are requesting to become Americans; they instead demand legalization because they understand that means they get all the goodies right away.

As I’ve noted before, in Illegal Aliens Length of Residence Demonstrates Amnesty Is Unnecessary, life “in the shadows” can’t be all that bad. According to Pew Hispanic, “63 percent of unauthorized adults had been in the country 10 years or more,” so they must be pretty happy with their sub-second-class status.

Remember that the immediate legalization in all plans we’ve heard so far confers the economic advantages of American citizenship with no annoying responsibility.

All of the amnesty schemes instantly confer the top payoffs that illegal aliens desire, namely access to American jobs and protection from deportation. Plus, nobody will be checking whether the millions of amnestied are learning English or paying back taxes. The big raza dream is a mega replay of Reagan’s 1986 amnesty travesty, only with ten times as many recipients.

Why should we open up our labor market to foreign lawbreakers when 20 million American citizens are unemployed? And poor people have suffered the most, with their already low wages feeling the downward pressure of increased competition of cheap foreigners.

The only way to end illegal behavior is to punish it, as we do in every other area of lawbreaking in society.

Former Florida Gov. Jeb Bush said Monday he does not support a pathway to citizenship for undocumented immigrants living in the U.S., a central provision of immigration reform plans being considered by Congress.

Bush has long chided the Republican Party to adopt immigration reform and improve its outreach to minority and immigrant voters. But he said that a path to citizenship would violate the rule of law, and instead is proposing giving a path to legal permanent residency to many of the 11 million undocumented immigrants in this country.

“Our proposal is a proposal that looks forward. And if we want to create an immigration policy that’s going to work, we can’t continue to make illegal immigration an easier path than legal immigration,” Bush said during an interview on NBC’s “Today” show. “I think it is important that there is a natural friction between our immigrant heritage and the rule of law. This is the right place, I think, to be in that sense. Not to take away people’s rights.”

Bush, a potential 2016 presidential candidate, is promoting his new book titled “Immigration Wars” that he co-authored with conservative attorney Clint Bolick. It hits the shelves this week, and it will include concrete details on how they believe immigration reform should be handled.

The ex-governor’s stance is notable because of his reputation as an immigration moderate within the GOP, especially during the 2012 campaign season when he criticized GOP presidential candidate Mitt Romney for his opposition to immigration reform that legalized undocumented immigrants. As early as June of last year, Bush said he would be supportive of either a path to citizenship or a path to legal residency.

Now, Bush’s position on a path to citizenship is to the right of the bipartisan “Gang of Eight” Senate proposal, which has been endorsed by his former political mentee Sen. Marco Rubio (R-Fla.) and several other Republican lawmakers.

The Senate’s plan would offer temporary legal status to undocumented immigrants who apply, pass a criminal background check, pay fees, and back taxes, and learn English. Those eligible immigrants would then be able to pursue a green card, and then full citizenship once certain border-security metrics are met along the U.S.-Mexico border. President Barack Obama’s plan contains a more direct path to citizenship that is not specifically tied to a border security “trigger.”

A path to citizenship has long been the number-one policy priority for immigrant-rights groups, who say that citizenship is necessary for immigrants to compete in society. The alternative, according to these groups, a population of second-class citizens.

But Bush aligned himself with other Republicans who say that a path to full citizenship is not necessary.

He said that offering a path to citizenship to undocumented immigrants currently in the U.S. could incentivize future waves of illegal immigration.

“I think there has to be some difference between people who come here legally and illegally,” Bush said. “It is just a matter of common sense and a matter of the rule of law. If we’re not going to apply the law fairly and consistently, we’re going to have another wave of illegal immigrants coming into the country.”

Despite the divisions over key issues like a path to citizenship, Bush sounded optimistic that Congress could pass a comprehensive immigration reform bill.

“This is the one place where cats and dogs seem to be getting along a little more,” he said. “So I am optimistic there could be a consensus going forward on immigration.”