Tamar Jacoby And "California Without A Mexican"

Tamar Jacoby is such an obnoxious robo-cheerleader for the big business open-borders side that she does our work for us. (See Our Friends Tamar and MEChA.) Her screed in yesterday's LA Times is another example.

The only problem: Much as we need better enforcement, on the border and in the workplace, that's only half the answer. And without the other half—better, more realistic immigration laws—it will wreak havoc.

We've already had a preview of the likely consequences, and not just at the movies. For several years now, tougher border enforcement, plus competition from higher-paying hospitality and construction jobs, have deprived farmers in California and other states of the foreign workers they need to plant and harvest their crops.

The crisis peaks every year in August and September, and the photos start showing up in the newspapers: piles of rotting pears, strawberry plants choked by weeds, unpicked cucumbers grown to monstrous sizes and melons oozing in the fields. California without a Mexican [August 25, 2007]

Tamar neglects to mention that agriculture can avail itself of unlimited H2A visas to hire foreign pickers. But the truth is too tiresome when there's an extra nickel to be made by screwing the American public.

She also makes the same arguments as slave owners in the 1850s, bracero employers in the 1960s and mill owners in the early 20th century dependent on child labor—namely that their industries would collapse without exploitable workers.

If millions of Mexicans weren't volunteering to work for coolie wages, then agribusiness would automate its production, just like every other modern industry. As a result of America's dependence on foreigners to harvest our food, this country has fallen behind in agri-tech, and other countries are in terms of creating machines to do the drudge work like mowing,

To get an idea of what's possible, check out some recent harvesting technology. A company in San Diego, Vision Robotics, sees the mechanized future and is designing for it. Shown below is a harvesting machine specific for salad greens designed by another company: 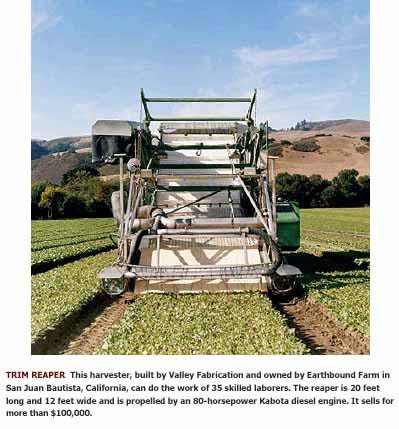 Remember that in 2004, a low-skilled immigrant household cost the taxpayer around $19,588 annually, according to a study by Heritage scholar Robert Rector. That cheap labor gets more expensive all the time.