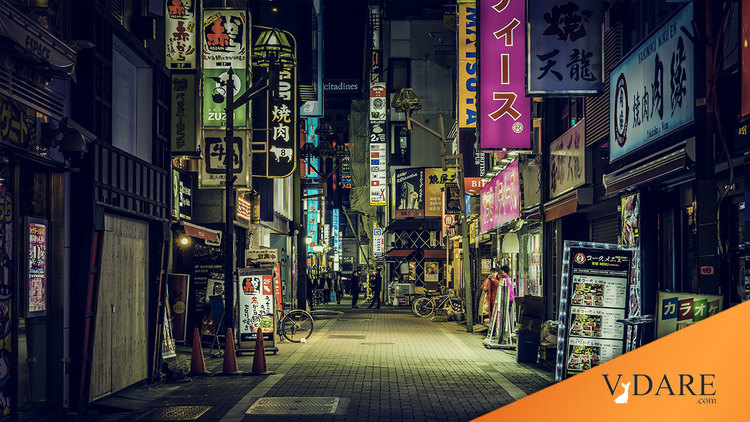 Immigration is on the world's mind. In the U.S., which had 974,000 legal immigrants last year, President Clinton just announced measures aimed at curtailing the estimated 300,000 illegal immigrants also arriving annually. In Germany, France and even in Australia, intakes have been cut back, and immigration has become a hot political issue. But there's one place immigration won't be reduced: Japan. There's already virtually none.

Japan is not discussed at all in University, of Maryland economist Julian Simon's The Economic Consequences of Immigration, one of the most celebrated texts on the subject. Simon argues forcefully that immigration is a good thing economically. Yet Japan has still achieved the highest sustained long-run growth rate of any major industrialized country. How?

Interviewed by Forbes (Apr. 2, 1990), Simon said: "How Japan gets along I don't know. But we may have to recognize that some countries are sui generis."

The recent political turmoil in Japan may lead to some fundamental changes. But immigration is not likely to be affected much, judging by Forbes' recent conversation with a Japanese consular official who wished to remain anonymous.

FORBES: I'd like to know the procedures to follow to immigrate to Japan and obtain Japanese citizenship.

ANONYMOUS JAPANESE OFFICIAL: [Complete surprise and astonishment] Why do you want to immigrate to Japan? ... There is no immigration to Japan.

ANONYMOUS JAPANESE OFFICIAL: There might be three people a year who become Japanese [chuckles]. And even they don't stay long, they try to go elsewhere, like the U.S.

He's not joking. Japanese entry statistics don't seem to recognize the concept of an immigrant, as opposed to a visitor. So Forbes has used the stock of legal permanent foreign residents in Japan—roughly equivalent to U.S. green card holders—as a proxy for immigration flow.

In 1991 there were about 900,000 permanent foreign residents in Japan legally, significantly less than 1% of Japan's 124 million population. This proportion has remained remarkably stable. (Japan's illegal population is reportedly increasing but still minute at perhaps 300,000 total.)

By contrast, according to Washington, D.C.'s independent Center for Immigration Studies (CIS), foreign-born residents are almost 9% of the 258 million U.S. population. (This estimate includes some illegals, but CIS says this would wash with the undercount of legals.) And the U.S. foreign-born population is rising rapidly-according to one estimate, to 12% by 2010.

Since 1945 a mere 222,000 foreigners have acquired Japanese. citizenship, including those who have married Japanese. By contrast, over 8 million have become Americans.

Underpinning Japan's radically different immigration policy: what appears to be a rigorous national consensus about what it means to be Japanese. This is a particularly unpleasant problem for the small Korean-descended minority in Japan. "It's only Westerners who think they can tell Koreans from Japanese," says Jared Taylor, a Louisville, Ky.-based consultant and author of Shadows of the Rising Sun: A Critical View of the "Japanese Miracle." "The Japanese can't. But Koreans are regularly fired, have their engagements broken off, when their ancestry is discovered."

Japan's zero-immigration policy may seem unpleasantly chauvinistic to most Americans. But it clearly has not prevented the most remarkable economic performance of the post-World War II era. GNP is up nearly ten times since 1955 and is now perhaps about half that of the U.S., which has not quite tripled in the same period. How has Japan done it?

One partial answer: capital investment. It is clear that the Japanese do save and invest more. According to the OECD, Japan's gross savings ratio in 1990, almost 35%, was 20 points above that of the U.S. And its gross fixed capital formation had averaged 9% growth over the previous five years, more than three times the American rate. This could mean that the Japanese, by substituting capital for labor, can grow without requiring additional bodies.

But economists are uneasy about the applicability of these statistics. And some major industrial countries come significantly nearer the Japanese savings and investment rate without matching its growth. Moreover, Japan achieved impressive growth rates before World War II, although its savings rate was then much lower.

The basic reason for Japan's immigrant-less expansion goes to the fundamental causes of economic growth.

"However surprising it may seem to laymen, growth in capital and labor is relatively minor as a determinant of economic achievement," says Peter Bauer (Lord Bauer), the famous British development economist ( Forbes, Feb. 22, 1988). "For example, the work of Simon Kuznets [such as his Modern Economic Growth: Rate Structure and Spread ] showed that increases in capital and labor together accounted for no more than 10% of the West's increase in output over the last 200 years, and possibly less. The balance was caused by innovation—new ideas, new institutions, new ways of working." 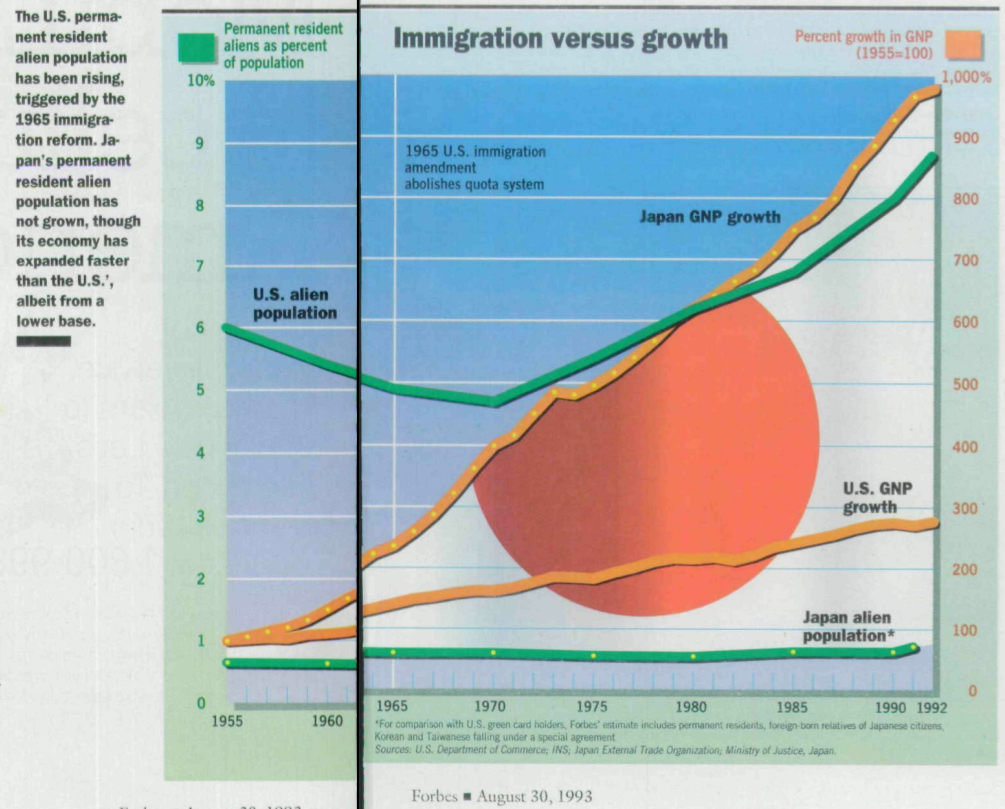 "There's no question that the key to Japanese economic growth is not the savings rate but institutional innovation," says Chalmers Johnson, a prominent Japan-watcher at the University of California, San Diego.

"It goes beyond substitution [of capital for labor]," agrees Kent Calder, director of the Program on U.S.-Japan Relations at Princeton University. He points out that when Japan's textile industry began to press for immigrant labor in the 1960s, "the bureaucracy quietly clamped down on it." Instead, the industry automated, focused on higher-value-added synthetics and ultimately moved low-skill production overseas.

Both Johnson and Calder expect marginal increases in Japan's use of contract foreign labor, long-term "trainees" and other subterfuges. But no fundamental change.

Japan has a demographic problem—a rapidly aging population. But it also still has surprisingly large reservoirs of underutilized labor—which in turn shows how effective innovation in its efficient sectors must be.

More than 7% of Japan's work force is still in its highly protected agricultural sector, two or three times the U.S. or U.K. proportion. Thus, allowing more food imports not only would benefit Japanese consumers but also would free additional domestic labor for other uses. Japanese women of childbearing age leave the work force more than in other industrial economies. Women who do work are notoriously restricted. So, by opening more opportunity to women, Japan could create vet more available workers from the existing population base. Finally, Japan's fragmented distribution sector is heavily overstaffed.

The bottom line: With innovation and better use of its existing labor force, Japan could well continue to prosper without opening its islands to immigration. Recently Forbes asked immigration advocate Julian Simon: Given Japan's apparent demonstration that growth through innovation is a viable alternative, is immigration necessary for the U.S. economy?

"I've never said it's necessary," Simon replied. Beneficial, in his opinion. But not a sine qua non of sustained growth.