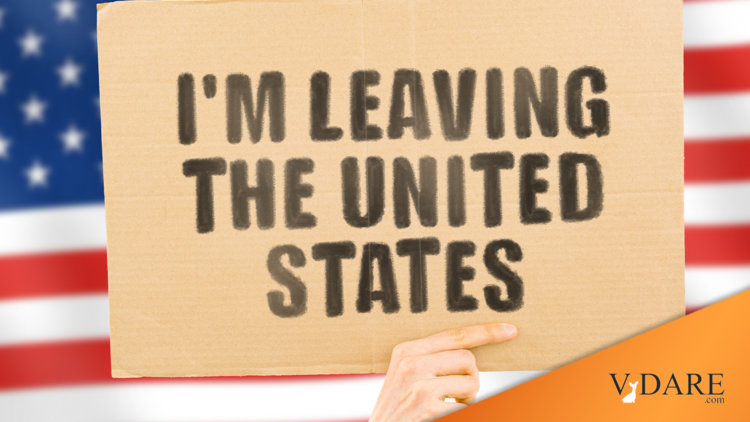 A Reader Asks If It's Time To Abandon Ship And Leave The US, John Derbyshire Replies

From:  A Reader In The Former City Of Minneapolis [Email him]

John Derbyshire's discussion of the various factions in our current Civil War was clarifying, and predictably depressing.

Depending on the outcome of the coming elections, I am seriously thinking about leaving the U.S.A. for somewhere else. I don’t know what or where, but it will be a place where people know who they are and who their friends and enemies are. It would be a place where there still exists something like a national community of interests, values and beliefs. The U.S. is no longer such a place.

I’m thinking of Israel for example, or Japan. I haven’t thought this through, and I suspect that the question isn’t quite as simple as I have put it, but I don’t want to live out the rest of my days during a period of revolutionary struggle in this country.  I only have a decade or two at most remaining, and I would prefer to not spend that time bearing witness to the steady erosion of "the traditional American way of life."

Do you consider it traitorous to abandon the fray?  I’ve never been a "go down with the ship" kind of guy.

John Derbyshire writes: I got the preceding from a reader in Minneapolis, although he identifies the city as "(What used to be) Minneapolis." I reproduce it here with his permission, slightly edited. He opened with some kind words about my various writings, which I would blush to include.