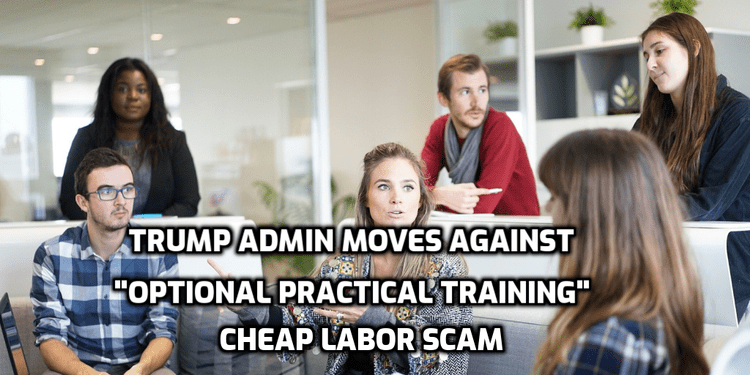 The mass of under-the-radar employment schemes for aliens to subsidize Big Tech while it censors patriotic Americans is in the news again.  The Trump Administration, at least the few remaining patriots, is attempting to end the most egregious scheme to subsidize the tyrants at Big Tech, the Optional Practical Training (OPT) program, where foreign students in the United States on an F-1 Non-Immigrant Visa (NIV) are authorized employment and whose employers do not pay various payroll taxes, like Social Security and Medicare deductions.

Under the George Bush Administration, the once minor OPT program, limited to foreign students, usually upperclassmen, while enrolled in classes, was expanded to renewable two and three year periods after graduation.  It is now a gateway for Big Tech to transition these low wage workers into H-1B NIVs and maintain them in a helot-like class of employers who are ever dependent on their employers for eventual sponsorship for legal permanent residence.

Trump administration hard-liners have taken aim at OPT, though not mentioned is Curricular Practical Training (CPT), a similar program to OPT, but for foreign students in graduate studies programs.  Both OPT and CPT actively encourage students to attend diploma mills or to remain in the United States endlessly as students obtaining multiple degrees.  Most students who do this are technically working illegally, as both OPT and CPT only allow employment during actual school semester or quarter;  foreign students are prohibited from working during semester or quarter breaks and summer break.  However, most continue to work when out of school during those breaks.

Previously, most colleges and universities acted ethically, and limited OPT and CPT to upperclassmen and second year graduate students, but recent trends have seen institutes of higher education marketing OPT and CPT to students, especially foreign students who do not have the financial resources to pay for their education.

Now higher education has an opening for poorer students who previously must have had to have the full cost of their full undergraduate program or graduate program paid from outside the United States, or by the student working illegally.  Now, they offer basically full-time employment from day one to their foreign students, many in Indian job shops, but many still work illegally in jobs unrelated to the undergraduate or graduate degree.

At the direction of the White House, the Department of Homeland Security has sent recommendations for further restricting legal immigration during the COVID-19 pandemic, according to one former and two current administration officials.

Among the recommendations expected to be considered is the suspension of a program for foreign students to stay in the U.S. to get one or two years of occupational training between secondary education and full-time employment, a move many in the business and university communities are fighting.

The program, known as Optional Practical Training, or OPT, is an incentive for foreign students to come to U.S. universities, as it provides some cushion between school and employment. Talk of suspending OPT has pitted business interests against immigration hard-liners like President Donald Trump’s senior adviser Stephen Miller, the officials said.

As usual, the fake news reporters don’t understand the issue, presenting this as “women and immigrants hardest hit” theme of the press’ war on immigration enforcement.  The issue of CPT is not even mentioned.  Are journalists completely ignorant of the subjects they cover?  They say it is about protecting Americans from the China Flu, but that is not correct.  It is about the 30 million unemployed in the United States.  But the pointy head intellectuals just whine about muh racisms.

“Suspending or ending OPT makes no practical sense — it solves no problem, it reduces the quality of America’s higher education system, and it threatens the international exchange of ideas so vital to academic freedom,” said Julie Schmid, executive director of the American Association of University Professors.

“International students contribute nearly $41 billion a year to the U.S. economy. Our campuses and our communities benefit from the contributions international students make to education and research,” Schmid said. “This move does nothing to ensure the health of U.S. citizens during the COVID crisis. As with Trump’s Muslim ban, this is just bigotry posing as concern for national security.”

The real question, though, is: Will Ken The Knife Cuccinelli and Stephen Miller have the power to impose this policy on the Deep State and Jared Kushner?

However, it does not look good.  In another area of import to patriotic immigration reformers, the Deep State saboteurs have been resisting collecting DNA samples from arrested illegal aliens and only now is something being done, after it was imposed in 2005 by legislation.

The Trump administration has begun implementing a 2005 law after years of pushback inside the agency.

The Department of Homeland Security is inching toward implementation of a decades-old law directing it to collect DNA from the undocumented immigrants arrested by its officers.

U.S. Immigration and Customs Enforcement has started a small pilot project in Dallas to collect DNA samples of undocumented immigrants who are arrested. And Customs and Border Protection started another pilot program months ago.

It’s a far cry from the robust implementation Congress envisioned when the DNA Fingerprint Act became law in 2005. And the moves, which may seem small, come after years of pushback from senior officials in the department, who argued the requirement was cumbersome and unhelpful.

DHS’ steps toward implementation of the law come after harsh criticism from whistleblowers and a government oversight office, and after a bit of arm-twisting from the Justice Department. The move will concern civil liberties advocates, who have long said a massive database of immigrants’ DNA could be ripe for abuse.

No surprise, though, ICE SVU will not collect DNA from those age 13 or younger.

As with fingerprints, ICE said it won’t collect DNA samples from anyone age 13 or younger.

The good news is that someone in the Trump Administration has learned that the Resistance bureaucrats at DHS are generally lying and sabotaging Administration policies.

That long resistance to implementation from DHS generated concerns in some corners of the Trump administration. And despite the incremental shifts from ICE and CBP, those concerns persist.

“There are people, including at the leadership levels of DHS, CBP and ICE, who are determined to prevent the DNA Fingerprint Act from ever going into effect,” one senior administration official told POLITICO. “These individuals are willing to continue to ignore the law and put the safety of the American people at risk. The Obama administration is alive and well at DHS.”

As the greatest man in law enforcement has said, welcome to the party, pal.