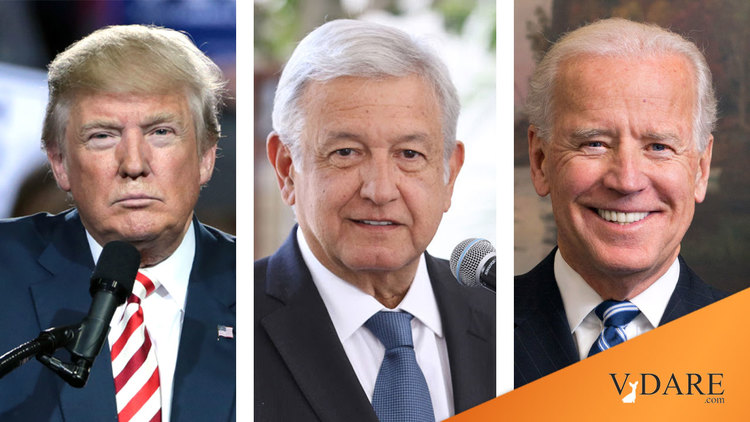 Trump, AMLO, Biden and the Borders

We're now in the Biden Era, and the border is changing. It's worth reflecting on what Donald Trump accomplished on the border with the help of Mexican President Andres Manuel Lopez Obrador (AMLO).

AMLO was elected on July 1, 2018 (took office on December 1, 2018).  I wrote an article about AMLO which was published on July 6, 2018, on VDARE.COM. (See it here). This is what I said in that article about a Trump-AMLO political relationship: "I suspect, by the way, that Trump and AMLO might get along."

I was right about that. AMLO and Trump did get along well. In Mexico, AMLO went out of his way not to criticize Trump.

But here's what I was wrong about.  After AMLO won, then-President Trump said of him that "I think he’s going to try to help us with the border." In that article I said "Will President AMLO, who Trump says is going to “help us with the border,” seal Mexico’s southern border?.... I doubt it....If he wants to help us, he has to prove it. I just don’t believe he, or any Mexican leader, would do it."

I'm happy to say that I was wrong. President Trump, thinking outside the box and using his foreign policy power, threatened Mexico with tariffs if they didn't reduce the quantity of Central Americans passing through Mexico. And what do you know, AMLO and Mexico did it !

Now here we are in 2021. Biden is changing the border. Crossings have increased.

AMLO is a realist. AMLO knows that Biden is now the president, and he has to deal with Biden. (See my recent article which discusses that).

There is also evidence that, under the table, the Biden administration may be encouraging that. According to Reuters

"Biden has been gradually unraveling many Trump-era immigration policies. Yet the new administration has encouraged Mexico and Guatemala to keep up border enforcement in their countries to stem northward migration, according to two Mexican officials and a U.S official, all speaking on condition of anonymity. Diplomats and experts at immigration think tanks told Reuters that it would be politically expedient for the Biden administration to keep asylum seekers and other migrants from trekking en masse to the country’s southern border, especially as Mexico and the United States are being ravaged by the coronavirus pandemic and seeking to contain its spread." [Insight: U.S. continues plan to keep Central American migrants at bay, by Laura Gottesdiener, Frank Jack Daniel and Ted Hesson, Reuters, February 12, 2021]

Isn't that interesting? Though the Biden administration doesn't say so publicly, under the table they are encouraging Mexico and Guatemala to keep the flow low.  There's a political reason for this.

"They also said any rush to the U.S border could hand Biden’s political opponents ammunition to sink the rest of his immigration agenda, which includes providing a pathway to citizenship for immigrants already in the United States and reducing asylum application backlogs."

In other words, if the U.S.-Mexico border becomes a big disaster and the American public knows it, that could make it less likely for Biden to be able to pass an amnesty.

Already, it's being reported that another caravan is forming in Honduras and El Salvador. In order to travel overland to the U.S., such a caravan would have to pass through Guatemala and then all the way across Mexico to get to the U.S. border. (See map here).

So if Guatemala and Mexico protect their borders, it helps us.

Here's a message which the Mexican Embassy in Guatemala tweeted recently: "Mexico does not promote nor permit the irregular entry of migrant caravans to its national territory." 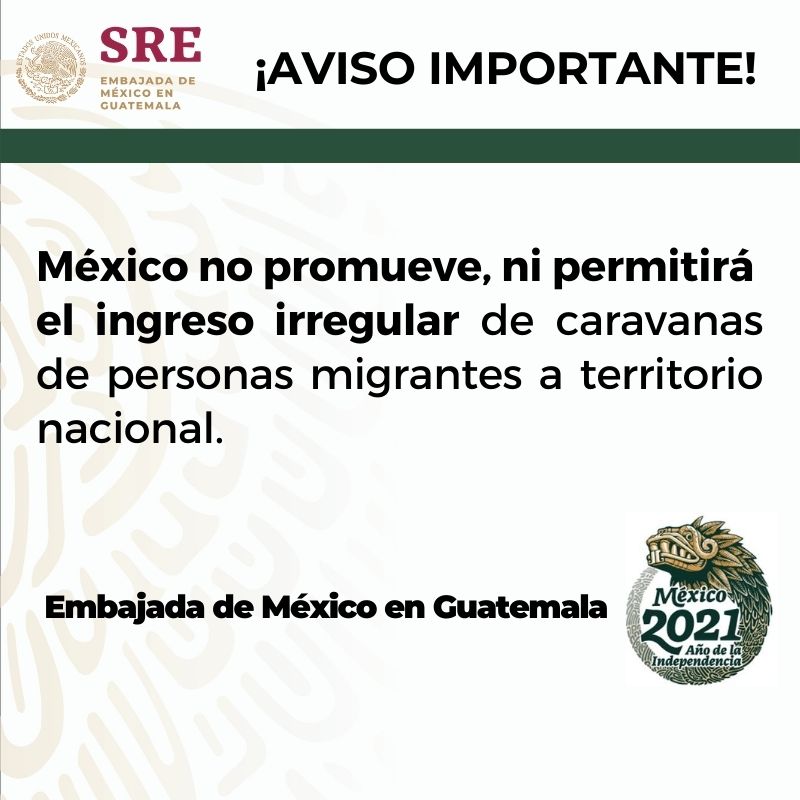