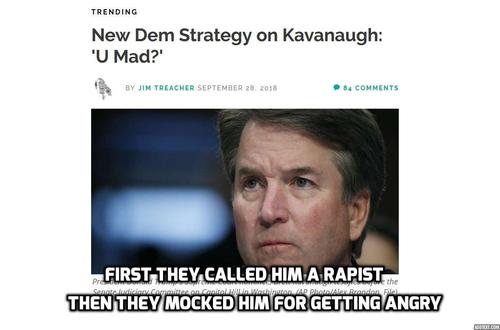 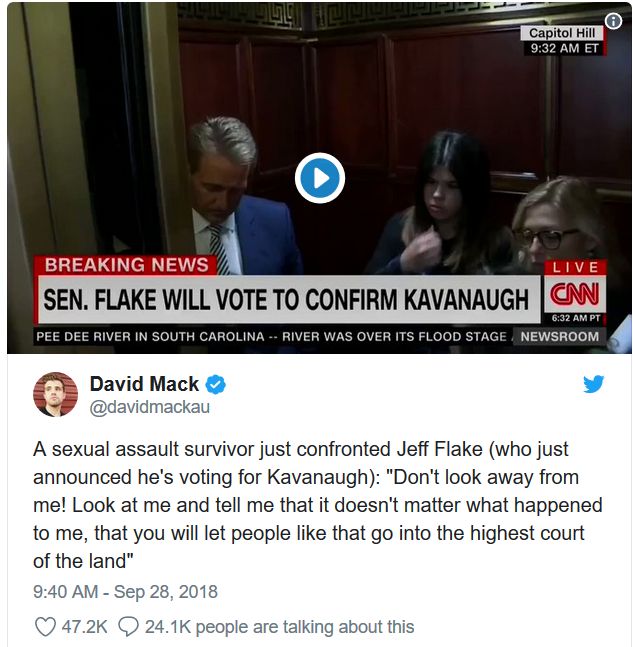 This has, in my opinion, been an unfortunate week in the politics of our republic.

From a partisan political point of view the Senate Judiciary Committee hearings on Judge Kavanaugh. have ended well, with Kavanaugh being voted through by the committee. The entire Senate will vote on his appointment to the Supreme Court next week.

Goodwhites are fighting a fierce rearguard action, though. A key figure here has been Senator Jeff Flake of Arizona, a Mitt Romney-style open-borders social conservative who is retiring from politics at the end of this year.

Flake announced this morning, Friday, that he would vote to advance Kavanaugh's nomination to the full Senate. Then midday he was cornered in an elevator by two shrieking women and apparently lost his nerve: He told the Judiciary Committee when he got out that he'd vote aye to advance the nomination only on condition the full Senate delays their vote for a week. [Trump agrees to FBI probe of Kavanaugh, bows to Flake, Dems, by Lisa Mascaro, Alan Fram and Mary Clare Jalonick, AP, September 27, 2018] Score one for hysterical harpies, score zero for the dignity of Senatorial process.

Favorite books of mine when I was a child were Richmal Crompton's "William" stories, about a high-spirited suburban English boy named William Brown who did naughty things and got into adventures. William's nemesis was a little girl named Violet Elizabeth Bott, whose main technique for getting her own way with William and his friends was to announce that if she didn't get her way, she would scream and scream until she threw up. In British English, with a lisp, her line was: "I'll thcream and thcream and thcream 'till I'm 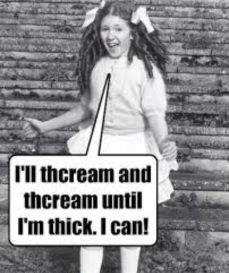 It worked with eleven-year-old William and his pals; clearly it still works with Senator Flake.

Still, unless the opposition can pull off a new stunt between now and next Friday—which can't be ruled out—failing that, the omens for eventual confirmation don't look too bad.

The thing people want to know is, what effect will these confirmation hearings have on the mid-term elections?

It's not easy to figure out. With the Presidency not in play, mid-term races are more local. Property taxes, highway maintenance, and shenanigans in the State Assembly loom larger than relations with China or terrorism or the National Debt. If you don't know all the local issues and controversies—and I'll admit I don't—it makes the mid-terms hard to call.

And then there's the famous base, the voters who take their politics most seriously. They're more prominent in mid-term voting than less committed types who will show up every four years to help pick a President but take a political nap in between times. Both big parties have a base, of course.

What makes the effect of the Kavanaugh hearings hard to estimate is that there was something here to please both bases. The mid-terms may hinge on whose base got pleased more.

Prior to these hearings, the phrase being bandied about was "enthusiasm gap." The Democrats' base voters were more fired up, pundits told us, their hatred of Trump just more intense after two years' exposure to him, their ranks fortified by two more annual cohorts of adult voters coming out of our colleges.[ The ‘Enthusiasm Gap’ Could Turn A Democratic Wave Into A Tsunami, By Nate Silver, Five Thirty Eight, March 14, 2018]

Those cohorts of younger voters have been marinated for four years in CultMarx ideology from anti-white, anti-male professors; and they've been subjected to careful sculpting of news and commentary by the social-media monopolies whose products they are addicted to.

Contrariwise, the pre-hearings wisdom went, Trump's base was disheartened and disappointed by Trump's failure to accomplish the big-ticket items they voted for in 2016: firm enforcement of immigration laws, properly defended borders, disentangling us from military commitments abroad.

It's nice that the economy's doing well, we got tax cuts, and our Israeli embassy has been moved to Jerusalem, but those are not things that brought out the Trump voters two years ago. Trump talks a good game, but he's visibly failing at the one thing above all a President needs to succeed at: getting Congress to turn his proposals into legislation.

So that was the situation pre-hearings. The Tutsis (Goodwhite Democrats) were still fired up by hatred of Trump and indignation at Mrs. Clinton's losing in 2016—unfairly, they are sure. The Hutus (aka Deplorables) were discontented, their 2016 passion deflated by the President's failure to move us any real distance away from invade-the-world, invite-the-world neoconnery.

The Kavanaugh hearings were not displeasing to Tutsis. Dr Ford's testimony, and the whole story she told, reinforced their fantasies of preppy white men having their way, coasting through life on arrogance and privilege, while non-male non-white serfs groan and suffer under the iron heel of oppression. So Tutsis are still fired up. The hearings did nothing to cool their ardor.

The Hutus will, however, I think, have gained more from the proceedings, thereby closing the enthusiasm gap some. There was a lot for a Hutu to like there.

Mainly there was Judge Kavanaugh himself, of course. He was firm and clear, he showed spine, and he gave as good as he got.

He mixed some yin in with the yang, too, some feminine in with the masculine, choking up when he talked about his daughter praying for Dr Ford.

If I am at all representative, Hutu men winced at that. We'd rather a man kept his composure in public. Hutu women, however, really go for that stuff. I doubt the Republican Party lost male Hutu votes on account of Judge Kavanaugh's tears, but it picked up a few thousand on the distaff side.

Similarly, though in reverse, with Dr Ford's testimony. Tutsi voters just had confirmed what they already knew: that women are helpless victims of the evil patriarchy; but that a few, possessed of boundless courage, dare to kick against the pricks—that's a Biblical allusion, you folks sniggering in the back row there—and expose the sneering preppy rapist. "Dr Ford, I am in awe of your bravery," swooned Ellen DeGeneres, as if the woman had rescued infants from a burning building.

Hutus watching Dr Ford, on the other hand, got reminders of all the things they dislike about Tutsi women—the kind of women who end up as Professors of Psychology at colleges in Silicon Valley. The glassy frown, the snippy self-righteousness, the vocal fry and rising tones: Hutu teeth were being set on edge from sea to shining sea.

So net-net there, I'd say there will surely have been a closing of the enthusiasm gap. Tutsis are stewing in righteous indignation just as they were before, perhaps just slightly more. Hutus saw a man take a stand against the mob, throw some of their b-s back in their smug faces. It was heartening, encouraging.

And then there were the Senators themselves. 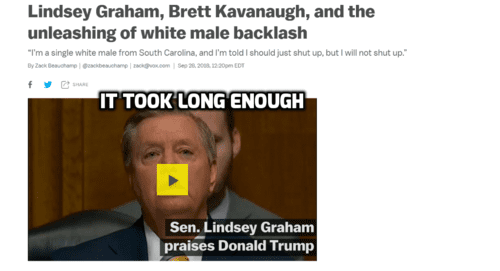 You have to think that GOP party bosses have been hearing from their voters this past couple of weeks. I don't know how else to account for Lindsey Graham going off like an air-raid siren the way he did. (And that simile, for the benefit of the back row again, is a pop culture reference.)

On the particular issue of Lindsey Graham I have mixed feelings. It was fun to watch the Senator fume and froth, but I don't want to see his stock rise any higher than it is. On the National Question Graham's been firmly and consistently supportive of the cheap-labor open-borders lobbies, the modern equivalent of the Slave Power. I don't want to see a guy like that have any more authority and influence than he currently has.

It's nice that Senator Graham has found his high dudgeon at last. Now that he's found it, though, how long will it be before he turns it against immigration patriots?

That's a quibble, though. Overall, I do believe the Kavanaugh hearings have been a positive for Trumpism. The hearings have made ever more clear the turn to Leninism among the Tutsi elites, in particular among congressional Democrats. By "Leninism" I mean the pursuit of political power by all means available, clean or dirty, without moral or ethical restraints.

Nothing matters to these people but power: not our institutions, not our laws and customs, not out history, not our Constitution, not truth or falsehood, not science or reason, not decency or respect, only Lenin's who-whom—whose boot is stomping on whose face? They are determined that it shall be their boot, our face; and in their view, every means is legitimate to bring that about.

The U.S. Senate was a last bastion of constitutional collegiality, even into the Trump era. In April last year three Democratic Senators voted to confirm Neil Gorsuch to the Supreme Court. I wouldn't bet on that happening this time around. We are now firmly in an era of smash-mouth politics, of Leninist who-whom. 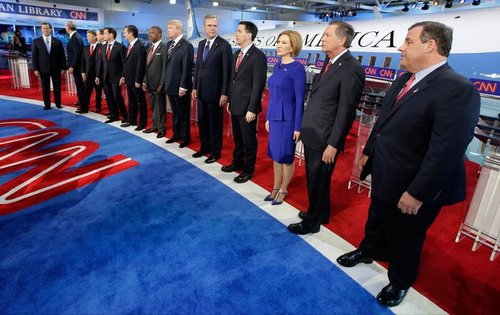 GOP voters have been waking up to this. That's why they chose Trump in 2016 over a raft of more traditional, gentlemanly, fight-fair Republican candidates—the types we knew would fold like cheap suits any time someone barked "racist!" or "sexist!" at them. Trump, the voters perceived, is not like that. Trump can play the smash-mouth game. That's why we wanted him.

It's also why a lot of us, especially in the older cohorts, have mixed feelings about Trump. Some of that is just a natural fondness for the familiar. The more collegial, well-mannered style of politics is what we grew up with. We hate to see it go; we just don't think there's anything we can do to stop the going.

Geezer nostalgia's only some of it, though. There are good reasons for a thoughtful person of any generation to look with foreboding on this newer, coarser style of politics.

If personal character, decency, and forbearance count for less, while ability to smash mouths counts for more, we shall be heading down towards Third World-style gangster politics. If some smart, conscientious patriot in the gentlemanly George Kennan mould is shut out of public service because he said something unflattering about Mexicans or tried to grope some girl at a high-school party, his place will be taken by someone colder, more ruthless, more selfish, more skilled at lying.

The key word there is of course "gentlemanly." Could any concept be more at odds with the zeitgeist than gentlemanliness? It's hard not to think there's a demographic dimension to this. That older style of courtesy, forbearance, and compromise that used to inform our politics was a white-European thing, perhaps particularly an Anglo-Saxon-Celtic thing.

As that population dwindles while others swell and organize, who-whom takes over, and we view ourselves not as fellow-citizens in a common polity, but as victims and oppressors.

You don't have to like this transformation. I personally prefer the older, more collegial style. The Kavanaugh hearings, however, made it clearer than ever, clear enough for even the least attentive GOP voters to see, that this is our politics today, the only game in town.

If one side is playing smash-mouth, the other side has a plain choice. Either we play smash-mouth too, or we lose all our teeth while the enemy keeps his. In Orwell's stark formulation: "If someone drops a bomb on your mother, go and drop two bombs on his mother."