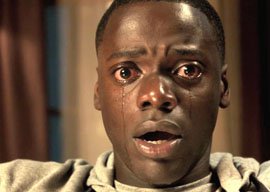 Get Out, a remarkably racist kill-the-white-people horror movie that makes Django Unchained seem like My Dinner With Andre, is the box office and critical smash of the winter. …

Get Out could have been a very amusing movie, but Jordan Peele correctly perceived that in this era there is big money in supplying audiences with their politically correct racial hate uncut with much in the way of wit. People don’t want intelligence in 2017, they want anti-white animus. …

Get Out is clearly modeled on the funny scene in Woody Allen’s Oscar-winning Annie Hall where Alvy Singer has an Easter ham with Annie’s ultra-WASP family.

For an alternative view of Get Out, here’s Cosmopolitan:

Get Out Perfectly Captures the Terrifying Truth About White Women

There are many scary things about the movie, but scariest of all is its realistic depiction of racism.

In Get Out, writer-director Jordan Peele takes 90 minutes to meditate on a lesson Kim Kardashian once spelled out for America via snake emojis and Taylor Swift: White women are not to be trusted.

… Peele brings Get Out to a higher level of horror, at least for any person of color in the audience. We’re all keenly aware of how possible it is.

The film begins with Chris (Daniel Kaluuya) traveling home for the weekend to meet his girlfriend Rose’s (Alison Williams) parents who live on the set of a horror movie — excuse me: in a secluded, wooded, mostly white suburb. …

It’s a literal and visual representation of building a better life in America on the backs of the subjugated.

As the plot unravels, it seems that Rose is willing to take Chris’s suspicions seriously and, as the title indicates, get out. …

But here, condensed into one 10-minute span, I recognized the sinking feeling of being betrayed by a white woman you’ve stanned for, loved, liked, or even simply been mildly okay with. …

For some, it’s the 53 percent of white women who voted for Trump, or finding out that the leader of your local NAACP chapter is literally a white woman in disguise. For others it’s finding out that Taylor Swift’s been coasting on America’s fear of black men for years. I feel it every time I realize there’s a white women on my Twitter timeline who will tweet in earnest for Planned Parenthood while sparing only a perfunctory tweet for Black Lives Matter or the Standing Rock Sioux. …

Jordan Peele is married to and expecting a child with a white woman, Brooklyn Nine-Nine’s Chelsea Peretti. He’s also biracial; his mother is white. …

White women have always played, and continue to play, a large part in upholding the supremacy. They have not held the best interests of people of color. Putting full trust in them has often been to our detriment. Rose’s willingness to put herself and, essentially, the survival of white bodies above the well-being of black people was as unsurprising as it was terrifying. In Get Out, whiteness trumps all, and the true horror is leaving the theater knowing that, in this case? It’s not just a movie.

This essay seems like the kind of thing you didn’t see all that much of before about Obama’s second term. This was in Cosmo, for heaven’s sake. This kind of naked racial hostility was less socially encouraged before about 2012 or 2013.