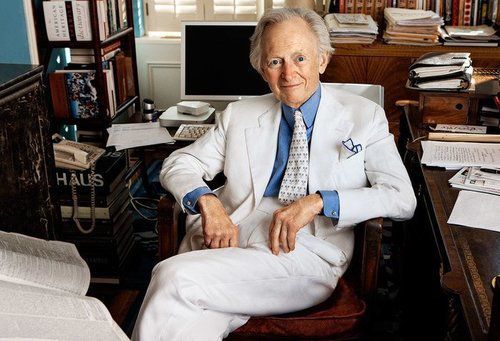 Tom Wolfe And The God of Things As They Are

I share the general sadness—which I think is particularly felt among us of the stone-kicking community—at the passing of the writer Tom Wolfe. Reviewing his novel I Am Charlotte Simmons, I prefaced my review with some general expressions of admiration, thus: 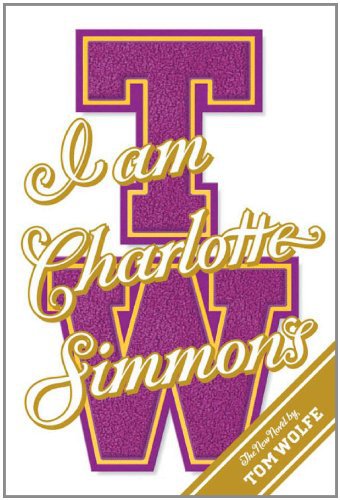 How does this conservative look forward to a new Tom Wolfe novel? Let me count the ways.

•  The political incorrectness.  Well, not exactly that. Tom Wolfe takes no point of view, has no bill of goods to sell. He just calmly, coolly records the way things are, the way people look and talk, the commonplace, mostly harmless, prejudices and solidarities that have survived 30 years of relentless media and educational indoctrination against them. Among the characters in I Am Charlotte Simmons are basketball players named Treyshawn, Dashorn, Cantrell, Vernon, and André. Would you care to hazard a guess as to what color they are? A Jewish student, trying to get out of trouble with a Jewish professor, makes sure "to let it be known that his family was Jewish, by packing his great-grandparents, pogroms in Eastern Europe, fear of being forcibly dragooned into military service in Poland, Ellis Island, the Lower East Side, and sweatshops into a single sentence, without losing track of the syntax …" For goodness' sake, Tom, don't you know you're not supposed to notice this stuff?

•  The class angle.  Modern U.S. society is addled with class snobbery. Poor and rural Americans are coarse-looking, ill-dressed, speak in dialect, and have lousy dietary habits. Rich suburban and high-urban Americans would much rather have nothing to do with them. When confrontations do occur, the rustics are insecure but defensive, the rich patronizing but impatient, with a frisson of guilt. Again, these are things known to everyone, but we are not supposed to notice them. Wolfe does notice them, and draws them to a "t."

•  The cold eye.  I don't know how the future will rank Tom Wolfe as a novelist, but he is a simply terrific journalist. Oh, sure, he exaggerates some when writing fiction to get the effects he wants; but you could put a Wolfe novel under a steel-mill press and not squeeze a single drop of sentimentality out of it. Wolfe's authorial tone to the reader is: You don't have to like this, and I'm not too crazy about it myself, but this is the way it is, and we both know it. Our society is awash with the grossest kind of sentimentality — in movies and TV, saturating the sappy nostrums of the Sunday magazine-supplements and corporate mission statements, pouring in from self-help cranks, victim-industry moaners and weepers, love-the-world useful-idiot politicians and Oprah-fied pain-feelers. Wolfe is the antidote to all this sugary glop. There isn't enough of him to have much effect, unfortunately; but when you're drowning in treacle, the merest squirt of lemon juice is refreshing. Wolfe worships the God Kipling worshipped, The God of Things As They Are.

•  Gray's Anatomy.  This fine old classic must never be far from Wolfe's working area. He is exquisitely precise about the naming of body parts. Who can forget the young attorney's sternocleidomastoid muscles in Bonfire of the Vanities? In this new book there is an iliac crest or two, but the main concentration of anatomical attention is on the absurdly pumped-up — jacked! ripped! — upper bodies of the athletes and frat boys. Lats, traps, delts, abdominals — here we are in all the sweaty narcissism of modern gym culture.

•  Typographical vitality.  A copy editor once sent back a manuscript of mine with all the italics, semicolons, dashes, parentheses, and exclamation marks stripped out. She was, I learned later, a disciple of some dogmatic imbecile — was it Strunk? — who had pronounced that the barest text was the best text. Well, the hell with her, and him. Our Tom shares my opinion that every key on the keyboard is there to be used, including the shift key. In I Am Charlotte Simmons he has even ventured a typographic innovation (I think — it is new to me, at any rate): using strings of colons for ellipses in interrupted or disconnected thought. Like this:

•  Neat plotting.  Wolfe isn't one of the great plotters — not a Wodehouse, not even a Trollope — but he understands the principles of moral balance and equity that make a novel satisfying to the reader. Virtue need not triumph, but ought at least survive; evil need not be routed, but ought at least be chastened; and there must be a sufficient number of secondary characters we are sufficiently interested in that the author's giving us some hint of their subsequent fate at the book's end adds minor satisfactions to the major ones.

•  Dramatic variations of depth.  Here a 500-word description of a seedy disco, all the details colored in: there a discussion of sociobiology. Here a blow-by-blow account of a college basketball game: there a rumination on neuroscience. Wolfe manages not to be show-offy with the intellectual stuff he puts into the novel. It's pretty basic anyway, and mainly there just to moor his characters' pleasures and sorrows to big old eternal truths. No harm in that, if deftly done.

The title on that review reminds me that Tom inspired one of the regrettably tiny number of genuine witticisms I have ever uttered in a life of slow thinking and staircase wit.

This was at a private dinner some years ago. There were fifteen or twenty of us around the table, including Tom Wolfe and TV producer Perry Wolff.

Now, Tom could be a little prickly—testy in disagreement. He was gifted with self-awareness, though; so no sooner had the testiness come out than he regretted it, and tried to make amends.

That's what happened on this occasion. He had a mild disagreement with Perry Wolff over something, I forget what. (Probably the social value of TV. Perry is a great believer in TV as a force for good. Tom was more skeptical.)

Tom said something sharp in response to Perry, and there was a little tension in the air. Realizing this, Tom did the gentlemanly thing, walking back his remark and adding some soothing words. Perry took it in the right spirit, there was relieved laughter around the table (there might even have been applause, I don't recall), and the two men shook hands collegially, smiling.