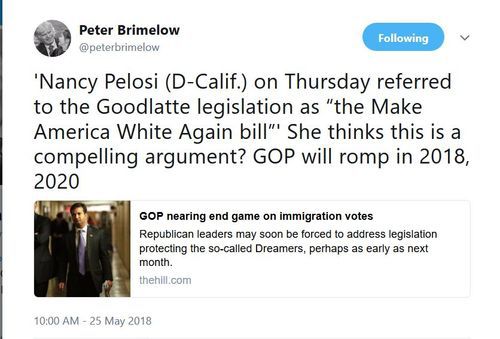 The midterm elections this coming Fall are shaping up to be really interesting, culturally as well as politically.

The political question is of course whether the Republican Party will lose control of the House and/or the Senate.

Current pollster wisdom is: Yes, the GOP will likely lose the House, but probably not the Senate. There are plausible alternative scenarios, though, that have Republicans holding on to both chambers, although with a reduced majority in the House. [What Happens If Republicans Keep Control Of The House And Senate?, By Perry Bacon Jr., FiveThirtyEight, May 22, 2018]

That would be interesting. As you've heard if you pay attention to party politics at all, the first midterms generally go badly for the party of a new President. For Republicans to maintain control of Congress would be a surprise.

The political rules are not what they once were though: "once" there meaning prior to … oh, let's say, November 8th, 2016. Donald Trump's victory rewrote the rule book. Surprises are no longer as surprising as they used to be.

The issue raised by a Republican victory in the midterms would be: Is the Sailer Strategy now seriously in play?

The Sailer Strategy is the one proposed by our own Steve Sailer back in November of 2000. That year's presidential election, George W. Bush v. Al Gore, had culminated in a very narrow win for Bush in the Electoral College, followed by a messy squabble over vote recounts in Florida.

Dubya's main problem, Steve argued after crunching the numbers, was that he had only won 54 percent of the white vote. If he had got just three percent more, 57 percent, he would have won in an electoral college landslide, even allowing for some alienation of the non-white vote.

The GOP could win more elections by raising its fraction of the white vote minimally than by somehow grabbing vastly higher fractions of the minority vote.

Of course, that is only true while whites are a big majority of the electorate, as they still were in the year 2000. They are still a majority, although less of one than eighteen years ago. The Sailer Strategy is still viable; and with sensible patriotic immigration reform it will continue to be so.

The underlying cultural question here is: Is the worm turning?

Are an electorally significant number of white Americans fed up with the anti-white propaganda, the appeals to white guilt, that have dominated public discourse for the past generation? If so, are they sufficiently fed up to swing an election? The 2016 result suggests that they may be.

Back of that is a larger question. One of the most under-appreciated books of the past twenty years has been Eric Kaufmann's The Rise and Fall of Anglo-America, published in 2004. Kaufmann argues that there has been a tension in the collective American psyche between, on the one hand, the universalist ideals implicit in the founding documents, and on the other, the ethnic self-awareness of the WASP ascendancy. That tension was resolved, he says, in the middle twentieth century by a decisive rejection of white-European ethnonationalism in favor of cosmopolitan universalism.

Nothing lasts for ever in human affairs. Hence the larger question: Is white America, or some politically consequential portion of it, now alienated from that universalism? If so, what will they turn to?

The Social Justice Warriors of course have a ready answer for that. Unmoored from cosmopolitan universalism, they tell us, white Americans will revert to being cross-burning, hood-wearing, neo-Nazi yahoos.

All that illustrates is the utter poverty of imagination on the political Left. In their minds, the only possible future is a reprise of the past.

A revival of the WASP ascendancy is likewise out of the question. That ascendancy was anyway undermined from the middle nineteenth century on by the great waves of non-Anglo-Saxon, non-Protestant Europeans settling in the USA.

But perhaps a more generalized white-identity consciousness will take hold. That would be better than the white ethnomasochism we are currently awash in, but not something I personally would welcome whole-heartedly. A nation of endlessly-squabbling identity groups would, it seems to me, be a dismal thing.

My own ideal: a racial and ethnic super-majority, tolerant and hospitable to small minorities of others: what I call "salt-in-the-stew diversity." A little salt in the stew improves it; too much spoils it. Numbers, numbers, numbers.

Here's a commentator who agrees with me: the guy—we know it's a guy—who dwells anonymously in Château Heartiste.

Now, Heartiste isn't to everyone's taste. His language is rococo, often crude, sometimes anti-Semitic. If you are not too repelled, though, and persevere with him, there are pearls of wisdom in there.

Personally, I don't relish a society structured solely around identity politics. It's gauche, claustrophobic, miserably stressful, and a mockery of the transcendent. But damned if I'm gonna idly sit by as every other group looks out for themselves at my group's expense. That's a suicide pact. But the only way out of this inevitability is to restore Whites to demographic primacy in their homelands, from which perch Whites can safely and confidently eschew identity politics without risk of parasitic infection.

My idea of a great country to live in: One that's so explicitly homogeneous that these implicit identity conundrums never need addressing.

That's taking the large cultural view of things. To return to immediate politics, what we likely have is a swelling number of white Americans who, while not locked into any real kind of white-identity mindset, are definitely anti-anti-white—sick of hearing themselves, their families, and their ancestors belittled and insulted.

While the Democratic Party is committed to anti-white positions, that swelling number of anti-anti-white whites is electoral gold for the Republican Party.

Whether the Republican Party—also commonly known, let me remind you, as the Stupid Party—has enough sense and skill to mine that gold, is an open question.

There are some hopeful signs from the White House, although that is of course not the same thing as the Republican Party.

Hopeful signs, none the less: Senior presidential adviser Stephen Miller, in an interview with Breitbart News this week, promised that Trump will go into the midterms with an aggressive strategy on immigration both legal and illegal.

The National Question is, as I said last week, a hundred-dollar bill lying on the sidewalk for the GOP to pick up. Will they have the wit and courage to pick it up, in the teeth of opposition from their donors in the cheap-labor lobbies?

We shall find out in November.