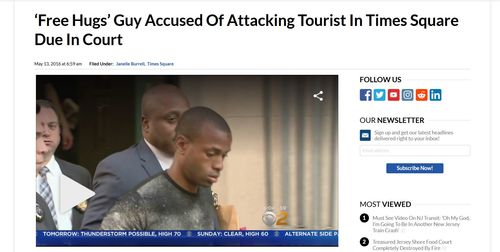 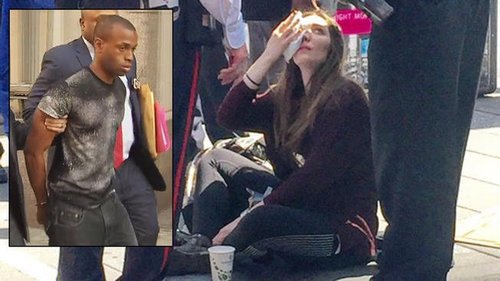 The black man who has been arrested for “randomly” throwing a little white boy over the 3rd floor railing at the Mall of America in Minnesota turns out to have a long history of acting like a vicious loon. But, despite all the talk by the great and the good about how America must get rid of Mass Incarceration, Emmanuel Deshawn Aranda was out and about.

Likewise remember the Free Hugs guy, the Times Square Hug Thug, Jermaine (a.k.a., Jeremy) Himmelstein? Despite having a name like a member of the Beastie Boys, he’s black. For years he’d been panhandling with a “Free Hugs” sign at tourist destinations in Manhattan. But when a white girl would tell him she didn’t want a hug, he sometimes would get really mad and punch her. He did it to a young lady I know four years ago, giving her a concussion. Finally, three years ago, his violent attack on a young woman tourist from Canada in Times Square was caught on video.

What with this being Himmelstein’s seventh arrest, it appeared he might finally be going away for awhile. But he was let go as “mentally unfit to stand trial.” By April 2017, he was back in the news:

The suspect, arrested in a now internationally-known attack on a tourist in Times Square last year, has a history of similar arrests dating back to 2013

The notorious “free hugs” sign-wielding man arrested in an attack on a Times Square tourist last year that became international news is allegedly harassing women on the street once again, an I-Team investigation has found.

Jermaine Himmelstein was found mentally unfit to stand trial in the attack on a 22-year-old Canadian woman in the Crossroads of the World last May, prosecutors say, and the case against him was dismissed. Prior to that, he’d been arrested at least six times for allegedly striking or harassing women, and, according to one disturbed woman in Union Square, he’s at it again.

The woman told NBC 4 New York this week that the 25-year-old Himmelstein was carrying his now infamous “free hugs” sign “and all of a sudden he started coming after us.”

The woman, who was crying as she relayed the story, said Himmelstein said she “had a problem with him and that he was going to beat the bleep out of us.”

Himmelstein admitted following the woman several blocks and cursing at her, but he said it was just a threat.

Himmelstein’s record of violence against women dates back to at least 2013. Some of the arrests involved allegations he punched women, in some cases for refusing to give him hugs.

In one attack in Washington Square Park, he allegedly told the victim, “you’re pissing me off, and I assault people when I’m mad.” In a subway attack last year, the threat was, “You will respect me when I knock you out.” …

Himmelstein spent six months at Rikers during the ensuing investigation, but city officials declined to say if he received mental health treatment there. …

The woman filed a complaint with police after the confrontation with Himmelstein. The NYPD said that, due to the nature of the incident, he couldn’t be arrested until officers witness him do it again.

And then in October 2017, the inevitable:

UNION SQUARE, Manhattan — The “free hugs” man with a history of harassing women is in custody again for attacking a woman in Union Square.

The victim, who told her story exclusively to PIX11, said Jermaine Himmelstein attacked her when she refused to hug him.

She said she was out with her mother and friends taking photos when he approached her multiple times.

“I did not expect for this guy to attack us,” she said. “From behind he runs and hits me right in the face with an open palm and just knocks off my glasses … and then runs off,” she said.

… His latest victim, however, told PIX11 she’s determined to make sure that doesn’t happen again.

“It seems to me that he keeps doing it and getting away with it,” she said. “And it’s scary because women shouldn’t be afraid to walk in their own city.”

Himmelstein was taken into custody Saturday and booked on assault charges.

New York City has a gigantic police force, so if they can’t get a notorious girl-puncher out of their prime tourist attractions, I just don’t know …

Don’t the British have some kind of ASBO system for giving bad actors detailed instructions of what they can’t do? Why, for example, is the Hug Thug allowed in any tourist destination?