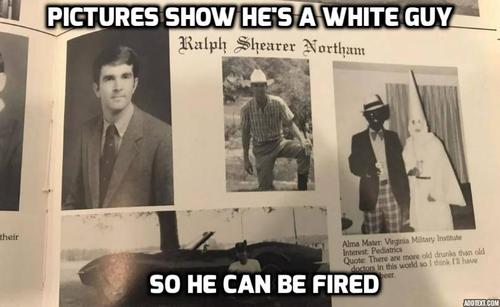 Not everyone this happens to is white—genetics blogger Razib Khan got fired from the NYT for having written a letter to VDARE.com in which he disagreed with us. Not everyone it happens to is a guy—Justine Sacco was fired for a Tweet, and it could easily happen to Kaitlyn Jenner, who despite other life changes remains a Republican, and certainly has a history of being "White Guy". But the principle remains that it you are a white guy, you can be fired.

Ralph Northam is a left-wing Democrat, who before he was revealed as a white guy, favored taking down Virginia's Confederate Monuments, although allowing local option for communities that wanted to keep them. He's opposed to the Death Penalty, and in favor of some gun controls. His opinion of Trump, he said, after explaining his experience as a medical doctor, was that Trump was "a narcissistic maniac."

But none of this matters, because he's a white guy, descended from slave owners, a graduate of VMI, who served as a medical officer in the American Army during the Reagan Administration. He's what the Soviets called a "Former Person".

The various people who want him to step down—resign from the Governorship to which the people of Virginia elected him—include Kamala Harris, Julian Castro, Ted Lieu, and a white guy, Eric Swalwell:

Leaders are called to a higher standard, and the stain of racism should have no place in the halls of government. The Governor of Virginia should step aside so the public can heal and move forward together.

If he does resign from office, he'll be replaced by this guy, Lieutenant-Governor Justin Fairfax: