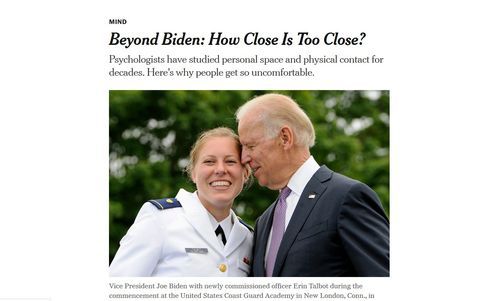 Hillary should have made this video into a campaign commercial in 2016: the way she keeps tapping Joe Biden on the elbow to try to communicate to him that he can stop hugging her now makes her seem more relatable.

Beyond Biden: How Close Is Too Close?

Psychologists have studied personal space and physical contact for decades. Here’s why people get so uncomfortable.

On Wednesday, the former vice president and potential presidential candidate Joe Biden released a video in which he discussed the importance of personal space. “Social norms have begun to change,” he said. “They’ve shifted, and boundaries of protecting personal space have been reset — and I get it.”

Is that true? Has society gotten more standoffish? My impression was that over my lifetime society has instead moved in Biden’s direction by getting huggier. A decade ago, when I was more sociable, it seemed like grown-up ladies at, say, school parent events were trying to hug me all the time. I would stand several feet away and lean over for a brief shoulder-to-shoulder embrace, which wasn’t too bad. But of course I’m not exactly Vice Presidential material.

Similarly, the Fast & Furious movies usually begin with the franchise’s Random Family all hugging each other for about five minutes.

Has that changed since then?

Thinking about it some more, I see we probably need a distinction between huggy and handsy.

One explanation for Biden’s tendency could be that he’s a less sloppy version of the often tired and emotional EU supremo Jean-Claude Juncker who is huggy and kissy and does odd things:

But by all accounts, Biden is like Trump: somebody who decided at an early age, after observing relatives’ struggles with the bottle, to never drink. So, I dunno …

Is there some other drug Biden could be on?