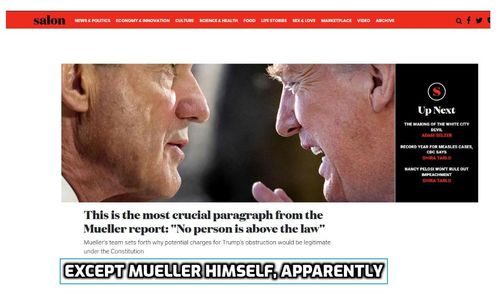 According to Robert Mueller, a president can be guilty of obstruction of justice simply by exercising the powers of the president—if he does so with "an intent to obtain an improper advantage for himself or someone else, inconsistent with official duty and the rights of others."

Wow. That's a new standard for a president's Article II powers! I don't see it in my pocket Constitution.

What Mueller is saying is that he should hold the position of supreme exalted master president to review all decisions made by the man who was elected to the office of president by mere voters.

Mueller can't say Trump obstructed justice. The investigation found no Russian "collusion," or related crimes, so there was no justice to obstruct. That's why there's nothing in the report about "perjury," "destroying evidence" or any other recognizable crime, like, say, "accepting a cash bribe."

Instead, Mueller proposes to review the decisions of the person duly elected president on a purity-of-motive standard. "An improper motive," the Mueller report states, "can render an actor's conduct criminal even when the conduct would otherwise be lawful and within the actor's authority."

If a special counsel is entitled to sit in judgment on a president's motives for exercising his constitutional powers, there will never be a president who is not under investigation for everything he does. Mueller is claiming that prosecutors and Congress have a right to probe the president's state of mind when he orders the 101st Airborne into action or nominates a new Supreme Court justice.

While we're at it, can the president convene a commission to investigate the motives of a member of Congress for voting a particular way? How about a Supreme Court justice? (I've been dying to get to the bottom of Justice Roberts' vote to uphold Obamacare.)

I'm fine with the new standard, provided it's retroactive and the punishment is death.

Have I got "corrupt" for you!

In addition to perjuring himself, suborning the perjury of others and hiding evidence in a private citizen's civil rights lawsuit against him, Bill Clinton issued a number of highly unusual pardons when he was president.

Clinton crony Susan McDougal, the Clintons' partner in the Whitewater Development Corp. scam, was convicted on charges of fraud and conspiracy. She sat in jail for 18 months on contempt of court charges rather than answer questions about whether Bill Clinton had lied in his testimony about Whitewater.

Is there any possibility that Clinton issued that pardon with "an intent to obtain an improper advantage for himself"? Any at all?

In July 1999, Hillary Clinton indicated that she would be running for the U.S. Senate from New York. Weeks later, President Clinton offered clemency to members of the Puerto Rican terrorist group F.A.L.N, responsible for 130 bombings in the 1970s and '80s that killed five, maimed more than 80 and caused almost $3 million in damage.

Was Clinton's motive for this pardon to help Hillary win the Puerto Rican vote in New York? Time for a purity-of-heart investigation!

(Principled as ever, Hillary initially supported the clemencies, until they turned out to be wildly, shockingly unpopular, whereupon Hillary remembered that she opposed them.)

Over the objections of everyone, President Clinton also granted a full pardon to Marc Rich, an international fugitive wanted on more than 50 counts of wire fraud, racketeering, evading $48 million in income taxes and trading with the enemy—specifically, conspiring with Iran as that country was holding 52 Americans hostage.

What possible explanation can there be for such a pard— Oh! Look at this! Rich's ex-wife gave $450,000 to Clinton's presidential library, more than $100,000 to Hillary's Senate campaign and more than $1 million to the Democratic National Committee.

Is it possible that Clinton's pardon of Rich was intended to "obtain an improper advantage for himself or someone else, inconsistent with official duty"?

How about the Clinton pardons for which his brother-in-law, Hugh Rodham, was paid $400,000? I'm not a fancy prosecutor in Robert Mueller's office, but it sure looks to me like selling those pardons constituted "an improper advantage" at least to Hugh.

I haven't even gotten started. This is just the pardons!

To mention a few other curious exercises of Clinton's Article II powers, there was also the sudden decision of his Department of Justice to investigate the NYPD, then presided over by—I'm sure this is entirely a coincidence—Hillary's presumed opponent for the Senate, Mayor Rudy Giuliani.

May we ask about the feds' motive for turning with a blind fury on the police department that had slashed New York City's murder rate by 67%?

And what was President Clinton's thinking when he approved the sale of sensitive ballistic-missile guidance technology to China over the objections of his own Pentagon, State Department and Justice Department? Here's something any independent counsel might want to look at: The Chinese had just funneled millions of dollars in illegal campaign donations to the Democrats.

Does that get a purity-of-heart investigation?

How about Obama? When he said if he had a son, he'd look like Trayvon Martin, and then sent three White House officials to Michael Brown's funeral—more than he sent to Margaret Thatcher's funeral—did Obama seriously believe Martin and Brown were innocent victims? Or was he just trying to gin up the black vote to help Democrats' electoral prospects—i.e. trying "to obtain an improper advantage for himself or someone else, inconsistent with official duty and the rights of others."

I'm sure Democratic presidents will be treated EXACTLY like President Trump.

Remember the most egregious of the Clinton pardons, the one granted to tax cheat and friend-of-the-Crazy-Ayatollah Marc Rich? Of course you do—it was just few paragraphs back.

Guess who investigated that pardon and concluded that Clinton's motives were pure? Yes: That would be James Comey.