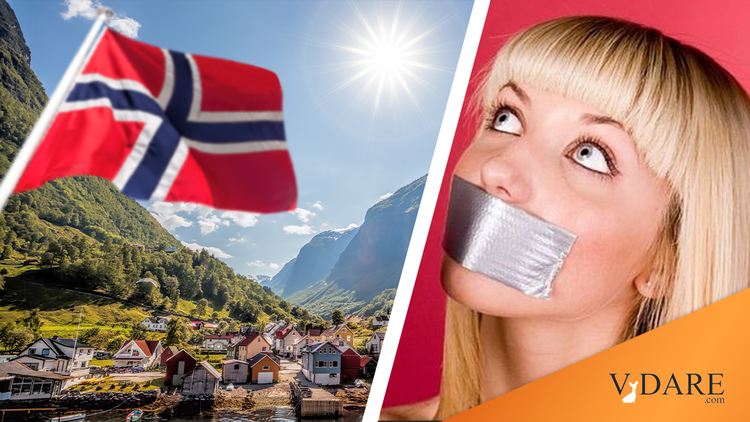 When you think of Western European soft totalitarianism, you think of Sweden with its less than secret ballots and state policy of diversity-worshipping tyranny. Norway, by contrast, seems to be a haven of Nordic sanity. It insists immigrants integrate, bans extremist Muslim preachers, prevents the establishment of Muslim schools, instructs employers not to hire women in niqabs, and insists on maintaining its independence from the—Globalist and Leftist—European Union. So recent news from Norway will come as something of a shock.

Norway’s parliament has voted to extend “Hate Speech” legislation against criticism of homosexuals—who have been “protected” since 1981—to “transgender” people. This means that a violent crime will be more harshly punished if it is considered to be motivated by hatred of transsexuals, and that it will be an offence to incite violence against them or use “dehumanizing” language against them both in public and in private [Norway outlaws hate speech against trans people, By Rachel Savage, Reuters, November 25, 2020].

“In private” would seem to imply something utterly Orwellian, making it an offense to “dehumanize” i.e. criticize transsexuals in conversations in your own home with your family, as some commentators have suggested [Norway Criminalizes Hate Speech Against Transgender People . . . In Private Homes or Conversations, by Jonathan Turley, JonathanTurley.com, November 29, 2020]. 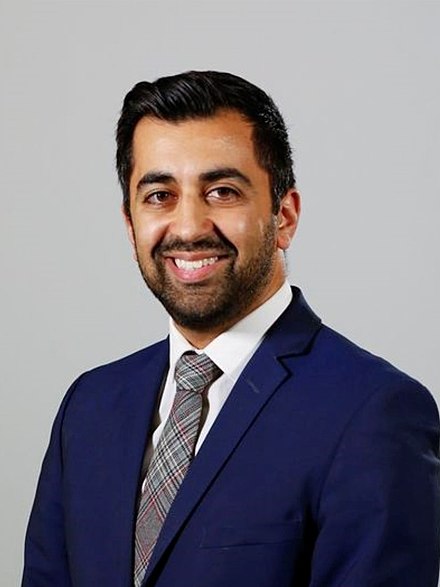 Not coincidentally, this soft totalitarianism is exactly what seems to be envisaged in the pro-immigration Scottish Nationalist Party’s very similar proposed legislation [SNP's new hate crime law could see people prosecuted for expressing views in OWN HOMES, by Richard Percival, Express.co.uk, October 27, 2020] The bill is spearheaded by Scottish Justice Secretary Humza Yousaf (right), the son of Pakistani immigrants, and it is tempting to assume he is merely importing traditional Islamic intolerance of blasphemy. But I think it is really just the religion of multiculturalism becoming more extreme.

Having consulted a Norwegian lawyer, who naturally wishes to remain anonymous, I can tell you that, according to the law, you can receive up to three years in prison if you “incite against” or “dehumanize” a transsexual “in public.” This is broadly defined to include in publications, online, or in public places.

However, up to one year in prison can be handed down to “a person who in the presence of others purposefully or with extreme carelessness expresses something that afflicts someone present.” [The legislation can be found, in Norwegian, here or as translated by Google here]. 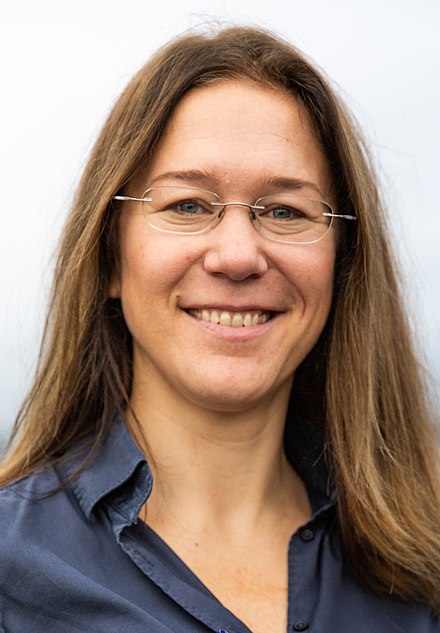 Anine Kierulf, an assistant professor of law at the University of Oslo, told the Reuters news agency that the bar for prosecution is high and that “There are a lot of very hateful things you can say about the protected groups” [Norway outlaws hate speech against trans people, by Rachel Savage, Reuters, November 25, 2020].

But what “dehumanizes” is extremely subjective and this law is dangerous, more so than similar laws with regard to homosexuals or ethnic minorities, because almost all transsexuals, with the exception of the minority who experience their feelings for as long as they can remember, have very serious psychological problems. 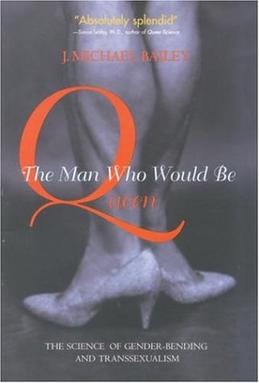 In other words, they’re nuts. And in Norway today—and in the West in general? —they call the shots.

A tiny minority of transsexuals literally do seem to have the “wrong body.” They will feel that they are girls for as long as they can remember. But, in most cases, these feelings manifest at adolescence, as sex researcher Ray Blanchard has shown [Varieties of autogynephilia and their relationship to gender dysphoria, by Ray Blanchard, Archives of Sexual Behavior, 1993].

Indeed, it has been shown that “Narcissistic Personality Disorder”—in which you develop a bloated sense of self-importance to cover up a fundamental sense of emptiness and despair—is very high among those who suffer from what is technically called “Gender Dysphoria.”

Consistent with this, it has been argued by one academic that the extraordinarily hostile and even violent reaction of transsexuals to scientists who do not accept that transsexuals are “born into the wrong body” is a classic example of “Narcissistic Rage”—when the Narcissist attempts to totally destroy anybody who forces him to question his own perfection; this self-perception being the only thing that stops him from sinking into the abyss of his own psychological emptiness [Shame and Narcissistic Rage in Autogynephilic Transsexualism, by Anne Lawrence, Archives of Sexual Behavior, 2008].

Is this “dehumanizing”? Surely, a case could at least be made that it is: “You are saying we are Narcissists. This will make people hate and exclude us. It is implying we are immoral.”

Considering the documented Narcissistic Rage of transsexuals, one can imagine Norwegian prosecutors being pressured to take someone to court for stating such obvious scientific facts.

Thus Norway and Scotland’s laws will prevent people from having reasonable discussions about social issues where those discussions might lead them to question the current dominant Narrative. In fact, this seems to be the point of such laws.

But it gets worse. There is large body of evidence that male-to-female transsexuals are highly masculinized. They are more likely to be autistic, to have a hand shape that betokens high testosterone, to be male, and to heterosexual (rendering them “lesbians” once they “transition”).

Autism is also associated with a weak understanding of who you are. Sufferers perceive the world as huge, swirling mass of detail without clear “boundaries” and this extends to how they see themselves, resulting in a weak sense of self, changes in identity, and an intense need for control [Sense of Self in Autism, by Michael Jawer, Psychology Today, August 7, 2014].

This is why autism correlates with anorexia, as the sufferer feels they at least “control” their body [Gender Dysphoria and Transgender Identity Is Associated with Physiological and Psychological Masculinization, by Edward Dutton & Guy Madison, Sexual Research and Social Policy, 2020].

Add Narcissism, also much higher among males, into the brew and you have transsexuality.

Could pointing these things out be “dehumanizing”?

Probably not, but it has, it seems, resulted in a highly emotional response claiming that the research “risk(s) causing serious harm to already-marginalized groups” by an academic called “Reubs J. Walsh” [“Masculine” Describes Gender Expressions, Not Neurobiologies: Response to Dutton and Madison (2020), by Reubs J. Walsh, Sexual Research and Social Policy, 2020] who is, of course, a male-to-female transsexual.

But what if we add that transsexuals seem to be genetically sick—more likely than “cis” people to develop cancer, arthritis, and even deafness? [Global health burden and needs of transgender populations: a review, by Sari Reisner et al., The Lancet, 2016].

This all implies that they are high in what scientists call “mutational load” . . . compared to “cis” people, in other words, they are “mutants.”

Arguably this is “dehumanizing,” but it remains a scientific fact. It probably wouldn’t lead to prosecution—but how can you be sure?

Transsexuals must be protected from hearing the scientific truth about themselves, lest it puncture the Narcissism which allows them to get through life.

Hopefully, the Norway which has stood so valiantly against globalism, in contrast to its anti-democratic neighbor Sweden, will wake up to the danger of this law and do something about it.