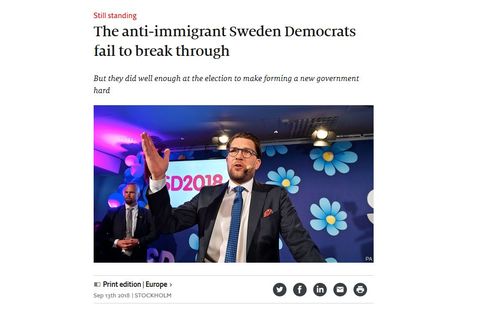 Why Didn’t Sweden Democrats Do Better?

Let’s not mince words. Last Sunday, in Sweden’s general election, the Sweden Democrats got a disappointing result compared to expectations. Much of the MSM were convinced that there’d surely be a “shy Sweden Democrat effect.” If the opinion polls put the party on 20% and in second place, then they were bound to do even better, maybe even come first [Sweden election polls 2018: Who are the Sweden Democrats? Could anti-EU party WIN?, By Amalie Hendon, Daily Express, September 6, 2018] But, although Sweden Democrats did increase their vote from 12.8% to 17.6%, they remained in third place. What went wrong?

One Swedish reader even wrote to us to make the point: SD would get more like 25% and, in his view, there was a strong probability that a hard-line SD break away—Alternative for Sweden—would also cross the line and make it into the Riksdag.

Back in the 2014 election, Sweden Democrats garnered just under 13% of the vote, making them the third largest party in the Riksdag, some way behind the Moderates (cuckservatives responsible for about a decade of Muslim mass-immigration) and the Social Democrats, the party of the Prime Minister, Stefan Löfven, who’ve topped every poll since the 1930s. The conditions seemed ripe for Sweden Democrats to at the very least come in second.

In 2015 alone, the Social Democrat Prime Minister had allowed 160,000 mainly Muslim males to settle in the country. They were responsible for a spike in rapes and other crimes including the torching of 100 cars during the election campaign,

Nevertheless, the Swedish Establishment was so overwhelmingly biased against the Swedish Democrats that during the final TV election debate the moderator intervened to condemn the remarks about immigrants made by the Swedish Democrat’s leader: “We must begin by saying that Jimmie Åkesson’s comments were blatantly generalising and SVT does not stand by them,” SVT host Martina Nord said. [Sweden Democrats to boycott public broadcaster following debate controversy, The Local, September 8, 2018]

My view: It is hard for outsiders to understand just how conformist Sweden is…and the effects of the best part of a century in which the Social Democrats have ruled the country. On the one hand, Sweden is Leftist, but on the other hand, as a relatively small country, it is strongly nationalistic, its model of nationalism being that Swedes are superior because of their egalitarianism and supposed tolerance and kindness.

While the rest of the world went to war, the Swedes got on with building an equal society, their Prime Minister riding the tram with everyone else.

The extent of the Soft Totalitarianism in Sweden (“The New Totalitarians” in Roland Huntford’s phrase) is so pervasive, even compared to its conformist, nationalistic Nordic neighbours, that a pariah right-wing party has an almost uniquely difficult task. Much as people are furious about immigration, but they are looking for a way of avoiding feeling that they are “traitors to Sweden” …and that’s how the Sweden Democrats are portrayed: “The Sweden Democrats are an un-Swedish phenomenon and should remain so. The Sweden Democrats are a party sprung out of the white power and racist movements,” the then-SDP leader Mona Sahlin stated back in 2010. [Sahlin and Åkesson clash in first Riksdag duel, The Local, November 3, 2010]

So, if there’s any way to avoid voting Swedish Democrats many will opt for it…and there was.

The Soclal Democrats and Moderates, out of absolute desperation, went into the election with policies which only the Sweden Democrats were advocating in 2014—and which they then condemned as “racist.” From manipulatively imploring Swedes to “open your hearts” to “refugees” in 2014 [Reinfeldt aims for unprecedented third term as Swedish PM, By Richard Milne, Financial Times, September 2, 2014], the Moderates now called for reduced immigration and strict controls.

Obviously, Swedish voters could see through that: The Moderate vote declined from 23% to 19.8%. With the Social Democrats’ decline from 31% to 28% this still means that 75% of Swedes—taking into account smaller parties’ results as well—voted for a more restrictive immigration policy. The movement towards anti-immigration policies by the two biggest parties has meant that a lot of people who, reluctantly, voted Sweden Democrat in 2014 and now returned to the mainstream fold. 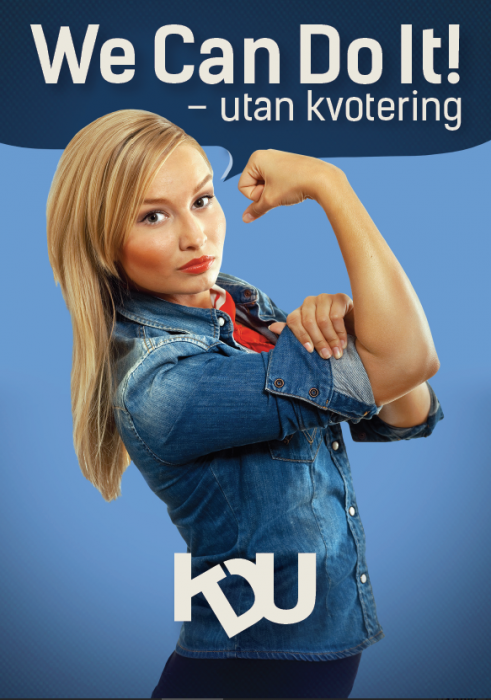 But, crucially, there was a more believable—and attractive—anti-immigration option than these two nakedly opportunist parties. The Christian Democrats, a fundamentalist Christian party, stole many of the Sweden Democrat’s policies as well. While the SDP and Moderates saw their vote drop, the Christian Democrats’ votes increased by a third, up to 6.4%—the highest vote in the party’s history. And, better still, its 31-year-old leader, Ebba Busch Thor (right) turned out to an excellent TV performer, on top of being extremely good-looking.

Since becoming leader in 2015, she has moved the party away from being simply “fundamentalist” towards being more broadly “right-wing” …and it has worked, picking up lots of female votes along the way. [KD-profiler kritiska till högervridning, Aftonbladet, April 25, 2015]

Guilty about being potentially “un-Swedish”, who would you vote for? A pretty, energetic graduate or—in a country obsessed with education—the SD’s Jimmie Åkesson, a university drop out, who took time off being an MP in 2014 due to “burnout”? [Åkesson sjukskriven på obestämd tid”, Dagens Nyheter, October 17, 2014].

Professor Anders Neergaard, a Swedish politics researcher, has been clear that the “Islamophobia” of the Christian Democrats definitely drew significant votes away from the Sweden Democrats. [Analysis: Has support for the Sweden Democrats peaked?, By Gaël Branchereau, The Local, September 12, 2014]

Indeed, it has to be said that the Sweden Democrats often performed quite poorly on TV during the campaign. They simply didn’t come across well. And this has been true throughout the last parliament. It was revealed to the election that one Sweden Democrat legislator used a large amount of tax money for his own private travel, allowing the stench of Establishment corruption to waft over the supposedly anti-Establishment party [Stefan Jakobsson (SD) drar tillbaka sin kandidatur, Aftonbladet, September 4, 2018]

Significantly, the vote for the extreme Left increased as well. The rabidly pro-immigrant Greens went from 6.1% to 8.6% and The Left, basically Multiculturalist Communists, from 5.7% to 7.9%.

Sweden’s Main Stream Media scare campaign about the Sweden Democrat’s possible triumph, in other words, polarised the country and ratcheted up the turnout, from 83% to almost 86% [Turnout in Swedish Election, The Local, September 10, 2018], with low turnout generally benefitting populists.

The local elections were held on the same day as the general election. The intimidation is evidenced by the fact that in some parts of southern Sweden, the Sweden Democrats won more council seats that it has candidates to fill them.

“People are subjected to a lot of threats, there's a strong social exclusion, in workplaces and unions. You lose friends or jobs, and that makes it hard for us to recruit people,” Lund University political science professor Anders Sannerstedt was quoted as saying in Gaël Branchereau’s The Local piece, linked above.

Danish observers were sent to Sweden to monitor the election, such was the concern about whether they were “free and fair”. A Danish conservative MP stated that he’d monitored elections in Russia and he’d never witnessed anything close to the undemocratic fiasco he saw in Sweden.

You pick up a ballot for a specific party—each a different colour—in full view, before voting behind a screen. You can disguise your intentions by picking up lots of ballots, but if one of these is the Sweden Democrat one, then it may well be noticed. “Party soldiers” were permitted to stand at the doors of the polling stations to press voters to give them their parties’ ballots, which the “party soldiers” would then fill in and put in the ballot box [Venstre-ordfører: Svensk stemmesystem langt fra europæisk standard, Berlingske, September 9, 2018].

Swedes are allowed to vote on election day but also around a week earlier, if they wish, in so-called “pre-voting.” At some “pre-voting” polling stations, Sweden Democrat ballots were simply missing [Förtidsröstningen försenad—valsedlar saknas i många lokaler, By Alf Sjögren, Sydesvenskan, August 22, 2018]. In one district of Gotenburg there was a two-hour period, on election day, where there weren’t any Sweden Democrat ballots at all. [SD:s valsedlar saknades i vallokal, SVT Nyheter, September 9, 2018.]

Considering the climate of intimidation, you’d have to be very brave to ask an official for a Sweden Democrat ballot and extremely committed to come back to the polling station later in the day in the hope your desired ballots were there.

As for the Sweden Democrat splinter group “Alternative for Sweden”, which came into existence because of the Sweden Democrats’ (vain) attempts to purify themselves, they were widely considered a wasted vote, as likely they wouldn’t pass the 4% threshold to get into the Riksdag. Also, government authorities engaged in such activities as cancelling their public election rallies on the grounds (shocking to Americans, at least until the rise of the Tech Totalitarians) that they represented un-Swedish values [S-topp stoppar AFS valfinal i Kungsan—Kasselstrand: ‘Nu är det krig!’, Fria Tider, September 3, 2018]

There’s no little Devil sitting on your shoulder persuading you to do the wrong thing. There’s 90 years of SDP dominance whispering to you, “If you vote SD then you’re evil and un-Swedish…” That’s if you can even find a ballot paper with which to do so.

A silver lining? It will now be fiendishly hard to form or maintain a government without the Sweden Democrats’ cooperation.

The result was not as good as hoped. But Sweden Democrats are still considerably more powerful than before the election