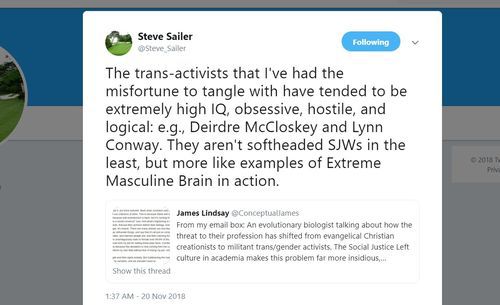 How Many Divisions Have The Transsexuals?

How many divisions have the transsexuals? My question is, of course, adapted from Stalin’s alleged dismissal of the Pope’s influence during the 1930s. But in the case of transsexuals the answer is, clearly, a lot: for example, Twitter has reportedly just announced it will punish users who “misgender” or “deadname” (use pre-transition names i.e. Bruce Jenner rather that Caitlyn Jenner) transsexuals. [Social media divided on Twitter's ban of misgendering and deadnaming, by Jamie Ensor, Newshub.nz, November 24, 2018]  That’s a remarkable victory for a group that amounts to perhaps 0.3% of the U.S. population—the majority (about 65%) male-to-female. [The Search for the Best Estimate of the Transgender Population, By Claire Cain Miller, NYT,  June 8, 2015] The possible reason:  super-male aggressiveness.

There is substantial evidence evidence that homosexuals are feminized males: their physical appearance, their personality and even their intelligence profile all tend to be close to that of women. [Homosexuality, birth order, and evolution, By Edward Miller,  Archives of Sexual Behavior, 2000]

But if it is true that transgender “women” are really “females born into a male body”—and, of course, it must be true because for it not to be true is “hate”—then this raises a crucial question: Why do prominent male-to-female transsexuals behave in such a fantastically aggressive way? Why do they seem to want to dictate to the rest of us how we can interact and even speak, for example proposing that “misgendering” them is a “hate crime”?

It was actually VDARE.com’s long-time columnist Steve Sailer who got me thinking about this,  with a perceptive tweet on 19th November, at the culmination of “Transgender Awareness Week.” Sailer wrote that:

The trans-activists that I've had the misfortune to tangle with have tended to be extremely high IQ, obsessive, hostile, and logical: e.g., Deirdre McCloskey and Lynn Conway. They aren't softheaded SJWs in the least, but more like examples of Extreme Masculine Brain in action”. Links added.

(In an earlier life Deirdre was free market economist Donald McCloskey, who was co-captain of his high school football team, and computer scientist Lynn Conway was named Robert.)

It struck me that Sailer was on to something. I’ve only known one male-to-female transsexual well. He was highly intelligent, manifestly autistic, and noticeably aggressive when it came to the issue of animal rights. I first knew him when he was physically male and there was nothing remotely effeminate about him; no hint whatsoever of what was to come. Could it be that male-to-female transsexuals are, in general, highly masculine and even that their transsexuality is an indirect result of this? Do they desire power and control because they have high levels of testosterone, as do so many leaders?

The first thing I remembered, as I mulled over Sailer’s tweet was the extent to which male-to-female transsexuals (hereafter “transsexual males”) are left-handed. As I’ve reported before, left-handedness is generally a product of something having gone wrong in development either due to a sub-optimal environment, mutant genes or a combination of the two.  This leads to an asymmetrical brain (asymmetry being a sign of “developmental instability”), the over-use of the right hemisphere, and thus left-handedness.

With transsexual males, left-handedness, which is about 10% in the general population, is as high as 50% [Most transsexuals are left-handed, says researcher, Telegraph, July 7, 2000].

So what’s going on? And why should left-handedness be so elevated in lesbians compared to homosexual men?

The answer: As Miller found in Homosexuality, birth order, and evolution cited above, exclusive lesbians are masculinized females, often exposed to high levels of testosterone in utero, in their physicality and psychology. Left-handedness, as well as reflecting developmental instability, is also a sign of high testosterone: sinistrality is a “male brain” trait; a product of testosterone. 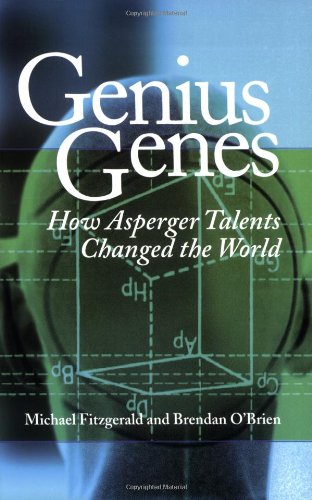 In Western countries, about 11% of men are left-handed, compared to roughly 8% of women. [Other Handedness Issues—Handedness & Gender/Sexuality, By Luke Mastin, Right-Left-Right-Wrong, 2012]

Left-handedness is positively associated with autism. The autistic brain, obsessed with rules and but disinterested in, and unable to understand, the feelings of other people, is the ultimate “male brain.” Even the bodies of autistics tend to be strongly stereotypically masculine; with, for example, a low 2D:4D ratio (the differences in length between your middle finger and your little finger—in general, the smaller this ratio then the more testosterone you have). [The extreme male brain theory of autism, By Simon Baron-Cohen, Trends in Cognitive Sciences, 2002(PDF)]

Left-handed people, like men, are over-represented at the intelligence extremes, both among the retarded and geniuses. This is because left-handedness can betoken mutant genes (sometimes with positive results, as with mutations for very high IQ). And, in addition, the genius tends to combine outlier high IQ with autism, meaning that he is obsessively focused on his research and couldn’t frankly give a damn if his breakthroughs offend people—as breakthroughs often do because they challenge vested interests. [Genius Genes: How Asperger Talents Changed the World, By M. Fitzgerald & B. O’Brien, 2007] 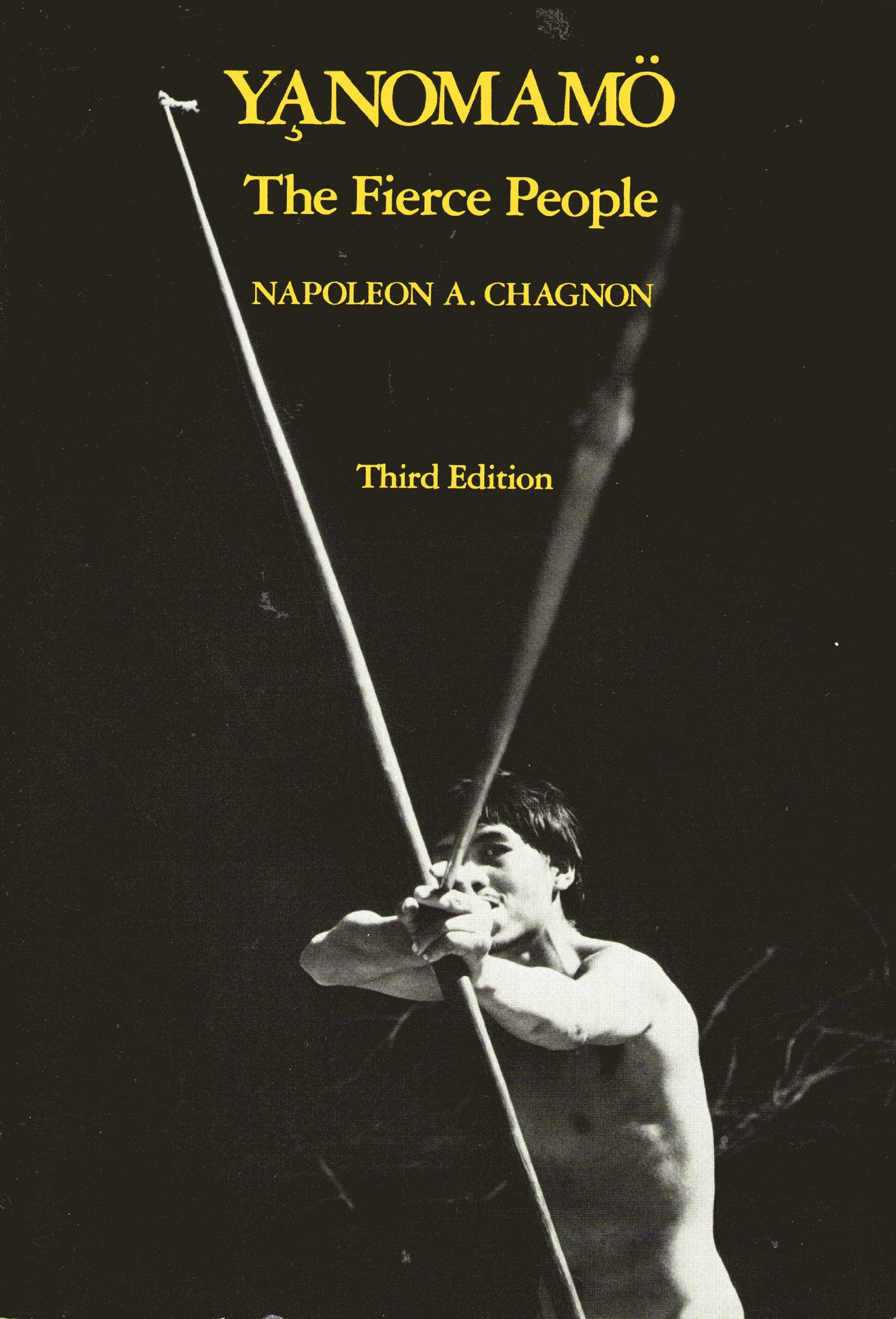 The more aggressive a population is, the more left-handed it seems to be. This is because, if basic needs are met by an easy ecology, then there is little need to cooperate and the level of Darwinian selection against mutation is not especially high.

So, there is, indirectly, a sound basis for Steve Sailer’s anecdotal observation in empirical studies. Transsexual males are substantially left-handed, which would predict being extremely aggressive and possibly even highly intelligent, to the extent that outlier high intelligence is a function of mutant genes—meaning it is comorbid with other mutations that tend to do you harm such as allergies, genes for mental instability, and genes for brain asymmetry. [High intelligence: A risk factor for psychological and physiological overexcitabilities, By R. Karpinski et al., Intelligence, 2018(PDF)]

Transsexual males’ left-handedness would also predict their being autistic, something which Sailer suggests he has experienced.

And in that autism reflects the “extreme Male Brain,” it is a pathology; it makes it difficult to function in everyday life. It also implies the presence of mutant genes, which is why it becomes more prevalent the older one’s father is, because the risk of mutant sperm increases with age. [Social epistasis Amplifies the Fitness Costs of Deleterious Mutations, Engendering Rapid Fitness Decline Among Modernized Populations, By Michael Woodley of Menie et al., Evolutionary Psychological Science, June 2017]

So there are number of factors behind the autism-sinistrality nexus: high testosterone but also, more generally, high mutational load leading to developmental instability. And transsexual males do indeed have elevated levels of autism [Gender dysmorphia and autism spectrum disorder: a narrative review, By A. Van Der Miesen et al., International Review of Psychiatry, 2016] as predicted by their high levels of left-handedness.

Having body-mind dysmorphia, where your mind says one thing, but your body screams another, is clearly maladaptive. Dysmorphia, of any kind, should be a product of developmental instability and, consistent with this, anorexic girls display elevated levels of left-handedness.  [Set-shifting abilities, central coherence, and handedness in anorexia nervosa patients, their unaffected siblings and healthy controls: exploring putative endophenotypes, By E. Tenconi et al., World Journal of Biological Psychiatry, 2010]

So that’s one reason for the association. But there’s likely another, more important, one.

Autistics are trapped in a world where they fail to understand social cues. Accordingly, they tend to develop low self-esteem and, crucially, a weak sense of self, because they do not really feel that they can control anything, despite having an autistic need for rules and order. [Developmental Psychopathology, Theory and Methods, By Dante Cicchetti, Donald J. Cohen, 1995, p.260]

Based on this, we can see the attraction of transsexuality. If you dislike yourself and have a weak sense of self, and life is going very badly, then maybe it is because you’ve somehow been born in the wrong body. At the very least, things can’t get much worse, so why not give being a woman a try?

In line with this, religious seekers, who go through transient phases of religious fervour where their identity is very clear, tend to suffer from depression, implying low self-esteem [Primary personality trait correlates of religious practice and orientation, By P. Hills et al., Personality and Individual Differences, 2004].

Articulate transsexuals, who’ve regretted their decision, have actually commented on this motivation, with it being one of the reasons why a sex-change, in the long term, does very little to improve the mental health of transsexuals.

Transgender people suffer from elevated levels of depression because they are autistic, meaning they live in a world which for them is chaotic and frightening [Depression and Anxiety Symptoms in Children and Adolescents with Autism Spectrum Disorders without Intellectual Disability, By John Strang et al., Research in Autistic Spectrum Disorders, 2012] And it continues to be after they’ve “transitioned,” though there may be a fleeting feeling of control and certainty in the immediate aftermath of “transitioning.”

Significantly, in line with the view that transsexuals are definitely not “born into the wrong body,” only 15% of them are exclusively heterosexual in their new bodies. [The Report of the 2015 US Transgender Survey, By S. James et al., 2015 (PDF)]

Steve Sailer seems, therefore, to have “tangled” with exactly the kind of people whom we would expect to be transgender: autistic, high testosterone, aggressive, outlier high IQ, and probably unhappy at a very profound level. This leads to a very weak sense of self, resulting in a need to overcompensate via an extreme, rigid (but ultimately insecure) identity: everyone must accept that they are “real women,” just as much as those with two X chromosomes are.

But, of course, they are not “real women.” They are men with very serious mental problems. No society should allow madmen—for that is what transsexual males are—to dictate its social policies, let alone (looking at you, Twitter) its codes of speech.