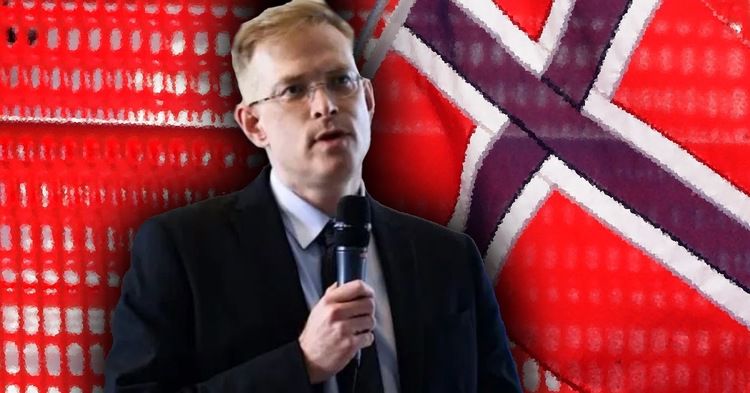 “Freedom Of Speech Dead In Europe” was the headline on James Kirkpatrick’s VDARE.com account of the November 2 Oslo arrest by Norwegian security police (PST) of the Scandza Forum’s American keynote speaker, Greg Johnson, Editor of Counter Currents. Johnson was indeed subsequently deported—or at any rate flown out of the country at Norwegian taxpayer expense. But, unlike with Hungary’s 2014 expulsion of Richard Spencer, or with the Schengen Zone’s 2019 exclusion of Jared Taylor (also on his way to speak at a Scandza Forum conference), this particular act of soft totalitarianism seems to have the Norwegian government nervous (possibly because Johnson hired a good lawyer). And Scandza certainly got a ton of publicity. So maybe free speech is not quite dead in Europe—just on life support.

Scandza Forum is run by Faroese Dissident Right activist Froði Midjord. It holds regular events for truth-seeking (and thus heretical) academics and nationalist politicians to the discuss their ideas with audiences who want to save the West from destruction. This Oslo conference was exclusively academic: The subject was “Human Biodiversity.” 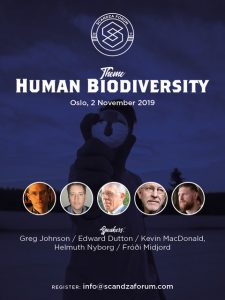 But Scandza has been coming under increasing pressure. At its previous meeting in Copenhagen in October, Greg Johnson was also prevented from speaking—because aggressive “Anti-Fascists” mysteriously discovered the venue and surrounded it, preventing Johnson and roughly a third of participants from getting in. In typical anarcho-tyrannical mode, the police did very little to help. In Norway, it is clear that a branch of the police was, in effect, actively working for the masked enemies of free inquiry and civilization.

Froði Midjord reports that the PST turned up at the venue, in a suburb of Oslo, and took Johnson away. How the PST knew Johnson was there is unclear. However, a Communist news website, Filter Nyheter, had run an October 31 piece, “Hailed Breivik’s Rationale for the July 22 Terror—Now he is Going to Oslo to Speak for ‘White Nationalists,’” claiming that Johnson had expressed support for the Norwegian terrorist Anders Breivik:

Johnson has previously expressed support for how Anders Behring Breivik justified the July 22 attacks in 2011 in his trial, referred to the terror as “necessary,” and has described at length the killing of Labor Party politicians as a legitimate means to fight “non-white immigration.”

In his scathing just-posted post-deportation account Anarcho-Tyranny in Oslo [CounterCurrents, November 6, 2019] Greg Johnson notes that this is a preposterous misrepresentation:

The whole point of my article [on Breivik] is to argue that killing Labor Party politicians—or any form of terrorism, for that matter—is not a legitimate means to fight non-white immigration.

Another article in Filter Nyheter, published on the same day, interviewed the “terrorism expert and senior researcher at the Defense Research Institute (FFI), Thomas Hegghammer,” who told them that “Norway should consider the possibility of denying Johnson entry before the scheduled conference on Saturday” due to these supposed pro-terrorism statements—which, as usual, he credulously accepted.

In an English-language interview below in front of Norway’s royal palace with Johnson’s lawyer, John Christian Elden (a celebrity in Norway who was featured on the front page of a leading tabloid the next day in relation to another high profile case he was working on [Elden varslet Høyesterett I 2017: BLE IKKE HØRT OM NAV-FEIL, Camilla Huuse & Runa Victoria Engen, VG, November 4, 2019, p.1]), Scandza’s Froði Midjord recounts that when the PST asked Johnson to come with them, Johnson asked whether he was under arrest. They told him that he was, although refusing to say why.

Johnson’s lawyer points out, however, that the police are legally obliged to tell suspects the reason they are being arrested.

The PST attempted to retrogressively correct this mistake by telling Norwegian newspapers that Johnson had not been “arrested” at all, but rather held in custody under paragraph 106 of the “Alien Act.”

But they had got it wrong again. Paragraph 106 relates to the detention of any foreigner in Norway. It is “Paragraph 126” which focuses on detaining people, without charge, who are perceived as a threat to the Norwegian state.

And this is appears to be what the Norwegian state claims that Greg Johnson is. When Midjord asks the lawyer “Is it illegal to have right wing opinions in Norway?” Elden replies: “Until today, I didn’t think so.”

Midjord then notes that the PST had told Aftonposten, Norway’s largest serious newspaper, that it was important that Johnson was arrested before he was able to “…give his presentation for the audience . . . We work proactively to prevent these milieus from growing, to keep them as small as possible.”

Elden replied that it is not in the legal jurisdiction of the Norwegian police to prevent political debate:

Absolutely not. And I think they went back to their desks, because now they no longer claim that he has been arrested. They say he’s been detained under the Alien Act by reason of being a threat to Norwegian security. So it’s a kind of new argument than what they had yesterday.

According to Attorney Elden, this is making new law in Norway. Nobody has ever previously been sent out of the country for their political opinions.

Indeed, eventually, Johnson was told he was free to leave Norway on his own hook, or simply stay and appeal against what had happened, the deportation decision having seemingly been overturned. And he is not banned from returning to Norway. He writes:

Since I wanted to go home, and since the deportation flight was the quickest and cheapest option (it was paid for by the Norwegian government), I took the flight. I also thought it would be an interesting experience—and it was. I can highly recommend being deported from Norway. It is infinitely better than normal air travel, true V.I.P. treatment: no long lines at security, no crowded departure lounges, no endless queues, first on and off the plane, people driving you to and from the terminal, etc. But, as I understand it, I was not really deported in a legal sense.

Meanwhile, back at the Scandza Forum, not long after Johnson was arrested, an organized gang of masked Antifa thugs turned up at the conference, the whereabouts of which they miraculously knew. They battled with riot police—who however managed to ensure that the conference attendees could safely get through the shouting rabble. Video recordings of the protest can be seen here.

The number of Antifa as reported at the time by the Norwegian state broadcaster, NRK, who were livestreaming from outside the conference, was 25. This increased as the day progressed and by November 5th, English-language website The Local—Norway were reporting that there had been 50 protestors. [US far-right extremist deported from Norway]

No conference attendee was arrested.

The media camped outside the event well into the night, desperate for interviews with the organizers, who chose to be picky about which newspapers they gave interviews to—rejecting a newspaper whom they thought would be biased, Dagbladet, as can be seen here, much to the embarrassment of the wannabe interviewer.

The actions of Norway’s security police, and of Antifa, ensured that this small Dissident Right conference was the major news story in Scandinavia for many days and that it spread around the world, even making headlines in China.

If “No publicity is bad publicity” then Oslo’s November 2019 Scandza Forum must be considered a phenomenal success.

But European free speech is, at best, on life support.