American  gay conservative Bruce Bawer moved to Europe and then Scandinavia partly because America is somewhat homophobic. He was appalled to discover that Europe and Scandinavia both have a Muslim population that is ten times as homophobic as the most religious Christian in America.

While the winners of the Nobel Prizes for real stuff (medicine, physics, etc.) are chosen by a committee in Sweden, the winners of the Nobel Peace Prize (which, admittedly, is sometimes given out for actual accomplishments, but is often, as in the case of Barack Obama, an award about nothing) are chosen by a committee in Norway. …[Rigging the Nobel Peace Prize Committee , PJMedia, December 12, 2017]

(I explained in 2009, when Obama got his notoriously undeserved Nobel Prize why the Peace Prize is decided by Norway, not Sweden, where the main Nobel Academy is—in effect it’s affirmative action for Norwegians). 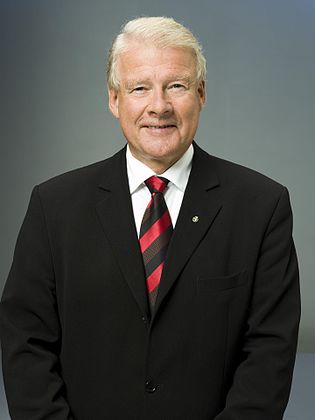 The domination of the committee by members of the Labor Party (big-time socialists) and Christian People's Party (bleeding-heart naifs) explains why the prize has gone to fake lefty do-gooders like Rigoberta Menchú, Jimmy Carter, and Al Gore. The attachment of both parties to the Palestinian cause explains how Yasir Arafat became a Peace Prize laureate.

Recently the Progress Party – the Classical Liberal party that has been part of the nation's governing coalition since 2013 – announced that it wanted its 73-year-old party founder, Carl I. Hagen [right] to sit on the committee. It was Hagen who, decades ago, almost singlehandedly made Norway's reckless immigration policy a political issue, thereby earning the hostility of the entire Norwegian political, media, and academic establishment – and the support of an ever-expanding percentage of the Norwegian electorate. …[Links added]

But the proposal to put him on the committee met with immediate outrage from virtually every corner of Norwegian society. One politician who wished to remain anonymous told the Guardian that Hagen's “opinions are not consistent with the values the prize promotes and that much of Norway wants to project.”

In fact, it’s just Norway’s Deep State that thinks that way—the actual Norwegian public elected the Progress Party, and is tired of immigration, among other bien pensant enthusiasms.

Read the whole Bawer article for more, but what I want to point out about the  Nobel Peace Prize is that it not only, as Bawer says,  doesn’t have good reputation now—but it never should have had a good reputation.

In 2009,  when Obama got the prize for simply not being George W. Bush (with extra points for not being white)  Pat  Buchanan called it The Affirmative Action Nobel.

I went further than that, and referred to The Peace Prize As The Special Olympics Nobel.

Even before the age of Affirmative Action, the Nobel Peace Prize has always been the Special Olympics of the Nobel World. You don’t have to achieve peace, you just have to mean well.

Shared a prize for bringing peace to Northern Ireland, which peace was brought again in the Good Friday Agreement of 1998, (basically a surrender) after some more violence George Bush brought peace to Northern Ireland once more in 2007 and (I wrote in 2009) if you’re interested, Hillary Clinton is in Belfast right now, bringing it yet again. (2017 update: With Brexit, Northern Ireland peace hangs in the balance, says ex-negotiator Jonathan Powell, Deutsche Welt, December 13, 2017).

Shared a prize for bringing peace to South Africa–which is not notably peaceful.

Solved the problems of the Middle East. No comment. So, I wrote,  if Obama doesn’t deserve the Nobel, and he doesn’t, he’s not the first.

The Nobel Peace Prize committee should be abolished.

But in the meantime, thanks to patriots like Carl Hagen, Norway is still refusing to abolish itself.

James Fulford [Email him] has been a writer and editor for VDARE.com since 2000. Nominate him for a Nobel Peace prize here.