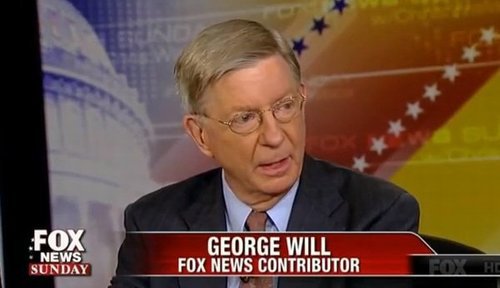 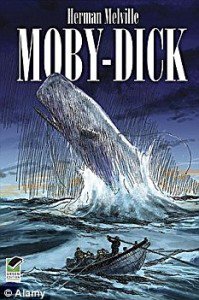 If the Washington Post were the Pequod, George Will would nail an Escudos doubloon to the mast as a bounty for harpooning Donald Trump. Apparently the bespectacled brainiac of the Beltway Right has gone off the deep end. Trump is his Moby Dick. The aging columnist will say anything to stop the leading anti-immigration candidate, who (despite the ruling class’s best efforts), still polls highest in the Republican field.

But before getting to Will’s Ahab-like obsession, note that no GOP candidate is safe from the penman if he is, as Will has described Trump, “transgressive”—i.e. violates Establishment norms. Thus in May, “amiable atheist” Will complained that Mike Huckabee had said removing God from public schools might have something to do with public school massacres.[ Mike Huckabee’s appalling crusade]. In fact, many conservatives have long agreed—like Huckabee, they think the United States is spiritually adrift, unmoored from Christian principle. Nevertheless, Will ridiculed the idea:

So, the [Sandy Hook] slaughter was a consequence of the 1962 Supreme Court decision against government schools administering prayers? Was the 2012 massacre of 12 people at the Aurora, Colo., movie theater caused by insufficient praying at America’s cineplexes?

Then Will likened Huckabee to Orval Faubus—the notorious segregationist who, like Huckabee, was once Governor of Arkansas. Huckabee had said the U.S. Supreme Court majority does not have the constitutional power to invalidate the marriage laws of states and that its decision are not the “law of the land,” citing the separation of powers and states’ rights. Again, these are elementary federalist talking points with which most Republicans agree. But Will had night terrors about man-eating dogs and fire hoses. “Appalling,” he called Huckabee.

Will’s said worse about Trump, so much so that one wonders whether his wife, who toiled for Scott Walker, is holding a grudge. Will hasn’t directly called Trump a RACIST!!!…exactly. But he has repeatedly conjured up images of Satan, the John Birch Society, the internment of Japanese during World War II and Nazi concentration camps.

Will launched his late-summer blitzkrieg against Trump on August12. [Donald Trump is a counterfeit Republican] He proclaimed that a “political party has a right to (in language Trump likes) secure its borders” and that because Trump was “counterfeit Republican,” conservatives must repeat William F. Buckley’s “excommunication” of the John Birch Society from polite conservative society in 1962.

“Buckley received an approving letter from a subscriber who said, ‘You have once again given a voice to the conscience of conservatism,’” Will reminded readers. The approving subscriber was Ronald Reagan. How ironic that Will cited the man who gave us the 1986 Simpson-Mazzoli Amnesty to argue for purging a candidate who opposes Amnesty,

The bow-tied mandarin fired again nine days later. “The GOP, formerly the party of Lincoln and ostensibly the party of liberty and limited government,” he harrumphed on August21, “is being defined by clamors for a mass roundup and deportation of millions of human beings,” and none of the candidates, except Lindsay Graham, had the courage “to voice robust disgust with Trump.” [Trump’s immigration plan could spell doom for the GOP]

This time, Trump wasn’t just a “counterfeit Republican,” but a Nazi, although Will didn’t have the courage to say it outright. Trump wants to deport 10 percent of California’s population, Will wrote, an impossible task. But the “big costs, in decades and dollars (hundreds of billions), of Trump’s project could be reduced if, say, the targets were required to sew yellow patches on their clothing to advertise their coming expulsion,” he wrote. “There is precedent.”

Then there was this:

Birthright citizenship, established by the 14th Amendment and opposed by Trump and his emulators, accords with America’s natural-rights doctrine. Arguably, this policy is unwise. But is this an argument Republicans should foment in the toxic atmosphere Trump has created, an argument that would injure the next Republican nominee even more than Mitt Romney injured himself? Romney, who advocated making illegal immigrants’ lives so unpleasant they would “self-deport,” might be president if he had received 10 points more than his 27 percent of the Hispanic vote.

Let’s unpack this. Firstly, Will himself is on the record as opposing birthright citizenship. He (or more probably the intern who writes his columns) seems to have forgotten this, or perhaps decided that it is now too much of a risk in Georgetown society.

Secondly, claiming that deporting illegals is impossible is not new for Will. In 2006, he conjured up the chimera of “11 million people” who “would fill 200,000 buses in a caravan stretching bumper-to-bumper from San Diego to Alaska—where, by the way, 26,000 Latinos live.” Of course, this absurdly supposes that all 11 million must be deported the same day. And how Will squares this with Republican hero Eisenhower’s Operation Wetback is a mystery. Recall that Ike had to round up a mere 50,000 illegals to send a half-million packing of their volition—“self-deportation”—a month into the program.

Thirdly, Will also incorrectly crunched the electoral numbers. Hispanics actually only cast 8.4% of the vote in 2012, so “10 points more” is only 0.84% of the total. But by this logic Romney also would have defeated Obama by receiving just over one point more of the white vote. In 2012, the white vote constituted 73.7% of total votes cast, so that 10 points would have been 7.37% of the total. This was eminently doable. Romney got perhaps 59 percent of the white vote in 2012—whereas in 2010 and 2014 the Congressional GOP got over 60%. And remember, white turnout was down in 2012, even worse than John McCain’s disastrous performance in 2008.

But Will wasn’t finished. On August26, we read that “[e]very sulfurous belch from the molten interior of the volcanic Trump phenomenon injures the chances of a Republican presidency.” [The havoc that Trump wreaks — on his own party] Sulfur (brimstone) is not just the odor that emanates from volcanoes but also that which wafts out of Hell. So we now have Trump connected to Satan.

But worse than Satan is George Wallace:

This is hardly the first time we have heard the United States singing lyrics like those of Trump’s curdled populism. Alabama Democrat George Wallace four times ran for president with salvos against Washington’s “briefcase totin’ bureaucrats” who “can’t even park their bicycles straight.” What is new is Trump promising, in the name of strength, to put the United States into a defensive crouch against “cunning” Mexicans and others.

“Curdled populism”? Let’s not forget how popular Wallace was. As Wikipedia explains it:

[h]e won almost 10 million popular votes, carried five Southern states, 45 electoral votes plus one vote from a faithless elector, came fairly close to receiving enough votes to throw the election to the House of Representatives, and became the last person (as of 2014) who was not the nominee of one of the two major parties to win electoral votes.”

Finally, Will jammed even more anti-Trump invective into last Sunday’s column It opened with the “loopy left” candidacy of Bernie Sanders and included a whole paragraph about Hillary Clinton.

Only Trump is thinking transgressively, which the intelligentsia encourages us to do. Sanders just wants a lot more of wealth redistributions. Clinton wants a bit less than a lot more. Trump, however, has made something novel discussible: He proposes turning America into a police state in order to facilitate ethnic cleansing.

When asked whether the forced deportation of 11 million illegal immigrants — almost as many people as passed through Ellis Island in 60 years — might take five or even 10 years, Trump scoffed: “Really good management” will get this done in at most two years. To meet a two-year deadline, his “management” wizardry will have to quickly produce a network of informers to assist at least 100,000 new law enforcement officers equipped with battering rams and bloodhounds.[ The bobblehead race for the presidency, September 25, 2015]

Will, who favors cheap immigrant labor and unsafe Mexican trucks crossing the border (because free trade) fears, along with his GOP Establishment patrons, that when Trump collapses, his support will go to Cruz, whose nomination would alienate purple state voters:

As the nominee, Cruz would, these Republicans warn, lose so badly in red or purple states choosing senators in 2016 (Wisconsin, Ohio, Pennsylvania, North Carolina, Colorado, Florida, New Hampshire, Nevada, Illinois) that he would cost Republicans control of the Senate.

But let’s not forget the dreaded “Trumpkins,” the amiable atheist’s term to describe Americans tired of voting for the politicians who have made Will a very wealthy man.

It is, however, unclear that Trumpkins will all migrate to one candidate when their hero departs, strutting while slouching. And although deferring delights can be virtuous, nothing is now more virtuous than scrubbing, as soon as possible, the Trump stain from public life.

Will’s unhinged opposition to Trump is an example of what happens when you swims in the polluted waters of the Beltway too long. Those who don’t care for the game as Will and his political confreres play it are viewed as beyond the pale. That is why Will smeared Huckabee, too. And naturally, he adopted the Left’s principle tactic: He called Trump and Huckabee “racists.”

Will’s calumnies about the two are remarkable not just because they are over the top, but because he himself has been the victim of the same baseless accusations. Mostly recently, the Left tried to destroy Will for bluntly and correctly assessing the campus rape myth. [ A Guide To George Will's Decades Of Attacks On Sexual Assault Victims And "Rape Crisis Feminists", MediaMatters, October 15, 2015 ]

And his experience goes back nearly 30 years: In 1988, the Left went after Will because he asked then-presidential candidate Jesse Jackson a tough question about international trade policy [The G-7 Question, by William Raspberry, February 15, 1988]. Jackson froze and replied “’splain dat.” (“Explain that” is what the Main Stream Media reported, but Jackson spoke in black dialect). The Left was still angry about this years later. [George Will's Double Standard, Slate, September 24 1999] But Will (then) had the right answer:

Because he is black, his white rivals sit silently beside him, leaving his foolishness unremarked. The real racism in this campaign is the unspoken assumption that it is unreasonable to expect a black candidate to get rudimentary things right. He should be thankful for double standards.

Maybe Trump should ask if Will keeps a white hood and a knotted rope in the closet?