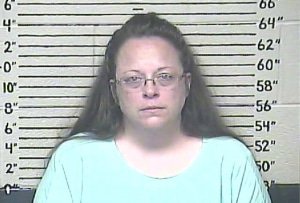 "If the law supposes that, the law is a ass—a idiot."

And it sums up the judgment of Rowan County Clerk Kim Davis about the Supreme Court's Obergefell decision, which said the 14th Amendment guarantees same-sex couples the right to marry.

Davis refused to provide marriage licenses to gay couples lined up at her clerk's office and was sent to jail for five days by a federal judge for contempt of court.

For behind her defiance are more authoritative sources than the five justices who gave us Obergefell: the Old and New Testaments, Natural Law, two millennia of Christian teaching and tradition, and the entire body of U.S. federal and state law up to Y2K.

Moreover, Kentucky never enacted a law authorizing same-sex marriage. Nor did the Congress of the United States.

Whence, then, did this "law" come?

Answer: This is a creation of a Supreme Court that has usurped the legislative power to impose a secularist anti-Christian ideology on a nation, much of which still rejects it, but has no recourse against it.

A right to same-sex marriage was no more in the Constitution as written or amended than was a woman's right to have an abortion.

The Court has lately been declaring to be constitutional rights that used to regarded as shameful crimes. This is judicial tyranny. And Kim Davis' defiance is as old as the republic.

Recall, we were born in a rebellion against the tyrannical acts of a king and Parliament we did not elect.

President Jefferson ordered the release of all those convicted under the Sedition Act, declared that he would no longer enforce that Federalist-enacted law, and pronounced it a nullity.

Socialist Party leader Eugene V. Debs defied the Espionage Act of 1917 and spoke out against World War I. Convicted of sedition, he was sent to prison for 10 years under Woodrow Wilson, but freed by President Harding.

Rosa Parks broke the law in Montgomery, Alabama, by refusing to move to the back of the bus. Martin Luther King, a disciple of Gandhi, preached and practiced civil disobedience his entire life.

Now there is a statue on the mall and a holiday for King and talk of putting Tubman or Parks on America's currency.

They are honored because their defiance of court orders and law-breaking were done in the cause of social progress.

But Kim Davis' defiance of a court order was done because that is what God told her to do, and she wanted to be faithful to the beliefs she had embraced as an Apostolic Christian.

Yes, Virginia, there is a double standard.

In the 20th century, if you were breaking the law or violating a court order to protest segregation, Vietnam, or apartheid in South Africa, you got an indulgent press.

But if you were defying a court order to stop blocking integration at the University of Alabama or Little Rock High, or stop protesting too close to the local abortion mill, you got lectures on the "rule of law."

Some conservatives say that Kim Davis as a public official has to carry out court orders, even those she believes to be immoral, or quit.

Yet the course she took has undeniably advanced her cause in our unending culture war.

For she rallied and inspired many with her witness, defiance and willingness to go to jail. She set an example of nonviolent resistance. She treated same-sex marriage not as some great social leap forward, but as a moral abomination. Many among the silent majority were surely nodding in approval.

She has also exposed the breadth and depth of the division in the country between an older Christian America and new Secular America.

Once, the Supreme Court could rely upon a residual respect for its proceedings, grounded in a belief that ours is a good government whose actions, even if we disagree, are rooted in principle and merit respect.

That reservoir of trust and good will is about gone.

Almost all of the civil and uncivil disobedience of the last half-century, from campus uprisings to urban riots to political protests, came from the left. But as an anti-Christian secularism becomes ascendant, dominant and imperious, rumbles are coming from right.

Indeed, from the raw politics of the Summer of Trump, it seems clear that Middle America has come to believe it has been had, and that the state that rules the nation is hostile to the country they love, and needs to be resisted and defied.

We are headed for interesting times.