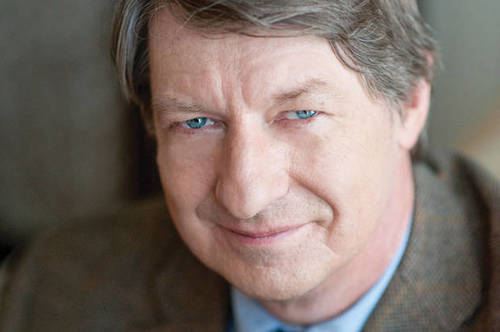 Conservatism Inc court jester P. J. O'Rourke, who was born again as an "iconoclastic" conservative after being an anti-war hippie in the 60s and 70s, just gave an interview with Salon Magazine explaining why he hated Ann Coulter because she was being mean to Mexicans. Quote:

Salon:[T] the thing about Ann Coulter is that at some point she started to adapt these ludicrous, extreme positions, and it was entirely calculated. It was a strategic maneuver, almost like a rebranding.

O'Rourke: I think you’re right about that. I mean, nuance went out the window. You can be dubious about the number of immigrants coming in the United States — legal, illegal or otherwise — without being rude about it. You could say, “Gee, this is putting a strain on our resources, so on and so forth.” I happen to be a pro-immigrant person. As I said in my piece, she’s from Connecticut, and she’s very upset about immigrants. I’m willing to lend a sympathetic ear to people from Connecticut when it comes to immigrants — if they happen to own a tribal casino! My feeling is, unless you’re Native American, you should just shut up about this. ‘Cause you ain’t from here.

P.J. O’Rourke on why Trump will collapse, Ann Coulter’s a fraud, and how National Lampoon created modern comedy, by Andrew O'Hehir, Salon, September 24, 2015

This is so stupid I don't even want to refute it.

The problem with refuting bullshit…. pic.twitter.com/L7XMYt6GBZ

It's also unfunny and (extremely) unoriginal. O'Rourke then went on to boast to the Social Justice Warriors of Salon of his impending hit piece on Coulter, written out of a combination of hatred and jealousy:

Salon:For a good while there, at least for many people of my generation, you were the designated “funny conservative.”

O'Rourke: Yeah, that was me. That was me and Ann Coulter, but she seems to have fallen off the bus.

Salon:Indeed. Her degree of funniness has gone in some strange directions of late, I would say.

O'Rourke: I think that’s put very kindly indeed. I just wrote a piece about her for the Weekly Standard — I wanted to write it for a conservative publication. I can only hope it saws about 6 feet off her legs. I just finished the edit last night so it’ll be up on their website this weekend.

The Weekly Standard hit piece, called "She Said What?" apparently focuses on Ann's Tweet about Republican candidates pandering on the issue of Israel, because if you want to destroy someone, you call them an anti-Semite. I haven't read it, though. Here are a couple of pull-quotes: 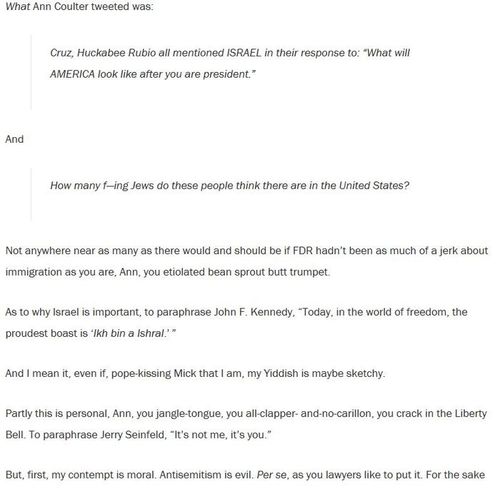 All right, I'm as much in favor of the right to "hate speech" as anyone else, but I don't have to read it. My explanation for O'Rourke's hatred—Ellis Island Fever, Irish-American version. Here's something he wrote during the Clinton Administration, illustrated with a picture of Bill Clinton in Klan robes: 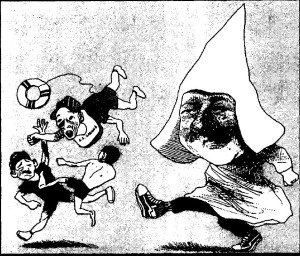 Ed Crane, president of the Cat0 Institute, the redoubtable libertarian E think tank, and I were having a cocktail hour chat about whether the Clinton administration should be sewn up in a sack full of cats or locked in a small, warm room with Michael Dukakis. After a few sets of  86-proof curls with the liquid-free weights, Ed made a perspicacious comment about the Cuban rafters and Haitian boat people currently being persecuted by our Coast Guard on orders from the Commander in Chief.

“Damn it, P.J.,” he said (I’m quoting from memory, so excuse me, Ed, if I don’t do your eloquence justice. I’ve got to quit putting vermouth in the gin). “Damn it, these people get on board things made out of oil drums, orange crates, balsa wood and cardboard boxes; they cross hundreds of miles of shark-infested ocean, suffer hunger, thirst, and exposure, and brave treacherous currents, high seas, and storms just to come to America. I say they’re citizens. Give them their passports right on the Florida beach-no oaths, no exams, no forms to fill out. These are the kind of people we want in America!” But these are not the kind of people our infinitely compassionate, sharing and caring, hug-mongering sop of a president wants in America. 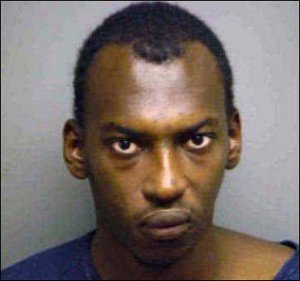 And if you don't like that's anecdotal, and most Haitians aren't like that (actually, they kind of are) a search for "Haitians" and "Welfare" brought up this much more respectable and wonkish piece from CIS: Fact Sheet on Haitian Immigrants in the United States, By Steven A. Camarota, January 2010.

And Mexican immigration is almost as bad, and much more numerous. That's the kind of Hatefact that iconoclastic, rebellious, frank tell-it-like-it is conservatives like O'Rourke can't understand. And it makes them do crazy things to try and undermine real conservatives who know what's going on.